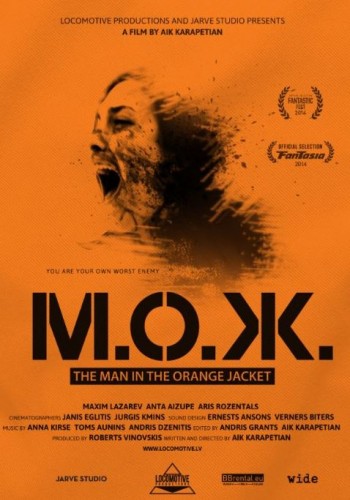 Vega Baby announced today the acquisition of North American distribution rights, excluding French-speaking Canada, to the critically-acclaimed horror film THE MAN IN THE ORANGE JACKET written and directed by first-time helmer Aik Karapetian. Produced by Roberts Vinovskis of Locomotive Productions in association with Jarve Studio, the picture garnered much attention on the festival circuit, including the Jury Winner for Best Director at the Fantastic Cinema Fest, as well as official selections in the Fantastic, Fantasia, BFI London and Telluride Horror film festivals. Theatrical and VOD release dates are to be announced shortly.

The film was initially screened by Vega Baby at last year’s Fantastic Fest and was well received there by both audiences and critics.  Vega Baby will be returning to Fantastic Fest this year looking for acquisition titles.

When a wealthy businessman (Aris Rozentals) lays off hundreds of harbor employees, one of the fired workers (Maxim Lazarev) breaks into his home to exact revenge. After taking revenge on his boss and family, he embraces the lifestyle of his victims but soon finds their wealthy and decadent lifestyle only provides a temporary respite from the stark reality of his crimes. This feature film debut from director Aik Karapetian is an unsettling horror film that deals with themes of revenge, class struggle and madness.

Karapetian is currently preparing his next film, a thriller called FIRSTBORN, which focuses on a troubled marriage. Locomotive Productions is also producing.

Aik Karapetian is repped by Zero Gravity and at UTA.

Tags The Man in the Orange Jacket