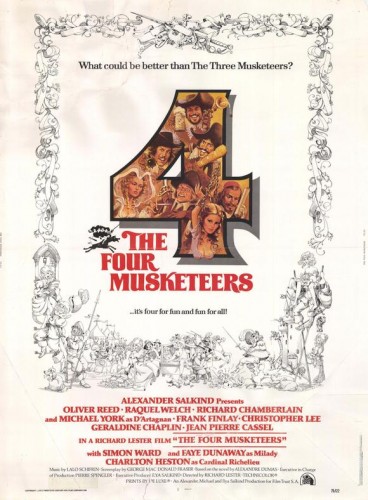 Richard Lester’s film The Four Musketeers is  celebrating its 40th anniversary this year. Produced by Ilya Salkind of Superman fame and with an all-star cast that includes Oliver Reed, Faye Dunaway, Raquel Welch, Richard Chamberlain, Michael York, and Sir Christopher Lee, the film will be shown on Tuesday, September 29th, 2015 at 7:00 pm as a special tribute to Sir Christopher as well as part of the theatre’s Anniversary Classics series.

Actors Richard Chamberlain and Michael York are scheduled to appear at the screening and take part in a Q & A and discussion on the making of the film.  Producer Ilya Salkind has confirmed that he will be attending.

Last year the Anniversary Classics series presented a successful 40th anniversary screening of The Three Musketeers, director Richard Lester’s stylish and entertaining retelling of Alexandre Dumas’ classic novel. Join us this year to see Lester’s stirring conclusion of the tale, THE FOUR MUSKETEERS (1975). The all-star cast is led by Michael York as D’Artagnan, Oliver Reed as Porthos, Frank Finlay as Athos, Richard Chamberlain as Aramis, along with Charlton Heston, Faye Dunaway, Raquel Welch, Geraldine Chaplin, Jean-Pierre Cassel, and Christopher Lee as the villainous Rochefort. While we celebrate the entire cast, we pay tribute to veteran actor Lee, who died this year at the age of 93.

The screening will be followed by a Q-and-A with two of the four Musketeers. Michael York made his film debut in Joseph Losey’s acclaimed Accident in 1967. He played Tybalt in Franco Zeffirelli’s highly successful film of Romeo and Juliet the following year; also starred in George Cukor’s Justine with Anouk Aimee; James Ivory’s The Guru with Rita Tushingham, Something for Everyone, England Made Me, Murder on the Orient Express, and Logan’s Run. He is probably best known for his leading role opposite Liza Minnelli in Bob Fosse’s Oscar-winning film version of the Broadway musical Cabaret. In later years York appeared in many TV series and movies and enjoyed renewed popularity in the Austin Powers movies of the 1990s.

First attracting attention as TV’s Dr. Kildare, Richard Chamberlain went on to have a stellar career on the big screen, in the theater, and on television. His many film roles include Twilight of Honor, Lester’s Petulia, Ken Russell’s The Music Lovers, The Towering Inferno, and Peter Weir’s The Last Wave. In the 1970s and 80s, Chamberlain became the king of the TV miniseries, starring in the enormously successful Centennial, Shogun, and The Thorn Birds. He attracted renewed attention with the publication of his autobiography a few years ago.