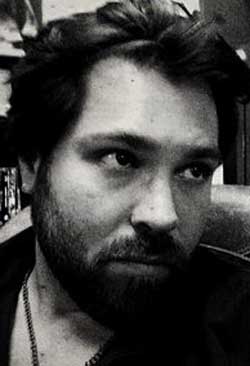 Director John Holt is fascinating to speak with. He has passion for film making, he could talk about it all day and make it sound new each time he speaks. He loves Directors and his genuine tone in his voice as he spoke about his love of director’s John Carpenter’s work, Joe Dante and John Cassavetes. John Holt is a fan of “The Howling,” “An American Werewolf in London” and he directed “The Dooms Chapel Horror starring Bill Oberst Jr., Austin Madding, Abby Murphy, Christopher Bower and William Ryan Watson. He has a kind personality and his vision for films is straight-forward. This is a Horrornews.net exclusive with John Holt and his producer Christopher Bowers

I love revenge stories a lot and I love dark stories a lot. I’m always surrounded and always wanting to talk to people about how they can take revenge on somebody. For example if someone broke in my house I’d shoot them with no problem, if you hurt me, I’ll hurt you. Would you really though? Going after people or attacking people or hurting someone, killing them. That is a big thing to me and I don’t know if everybody thinks they have the same thought in that moment. I love exploring that kind of stuff and revenge gets you nowhere. That is kind of the point of the story, it’s get you absolutely nowhere. Things happen to you and you just have to deal with it. If you try and take revenge or get even with someone, it’s not going to fix a thing. You will still be just as broken, just as upset and now you have even more guilt on your conscience. It does nothing for no one. That is where the revenge thing comes from. We did a short film back around 2012 called “The Hunt” and it was just a little experimental thing and found footage. We wanted to make it documentary style.

John Carpenter is on the top end for me, I just love his movies with all my heart. Joe Dante, Spielberg, everybody in the eighties like pretty much inspires me including De Palma all of those directors but I want to say Carpenter is probably going to be on the top of my list. I just don’t think anybody can frame a movie like him. I mean it’s a personal thing, I don’t know if it transcends to other people that watch his movies, personally what it does to me is invokes everything that I love in a movie. I also like Kubrick, Scorsese but Carpenter, Spielberg and Dante are my top three. 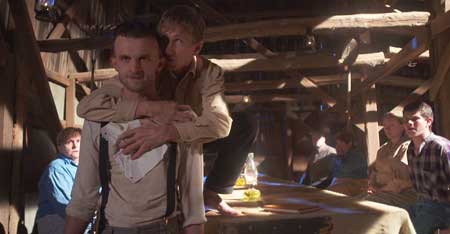 What made you want to become a Director?

I originally wanted to do make-up back when I was getting Fangoria, Gore Zone and watching Tom Savini it was make-up I wanted to do but realized real quick that I had no talent for that what’s so ever. So years went by and this was when I was a little kid you know I have been into Horror and Monsters since 1984 until now, still going strong. I come from a family who lived out in the country and there was no way they were buying me a video camera or anything like that so I grew up with nothing like that. Filmmaking did not come till like college for me. That was like in 2001, I was at a family get together and my brother had his digital eight camera and I was playing with the settings and I saw that it had a widescreen setting. It just clicked with me like oh my god I can do this. It wasn’t like I am going to be a director, I just wanted to make movies, I just wanted to make it and after I started doing all these projects by myself and one other guy for all these years it just became that way by default. And really when directing, I just consider myself, I just get the movie done. I know how it needs to look, how the actors need to act and where it needs to go and I just do it. That is pretty much it. 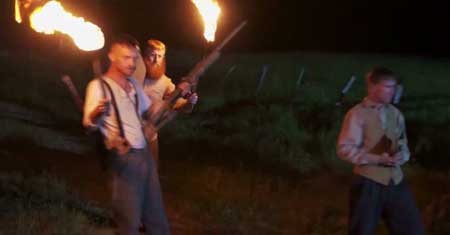 What is the most challenging part of being a director?

I think it is balancing everything and its fun. You do the best you can and assemble the most talented, most trusted people you can around you. My producer Chris Bower, he was there to make sure I had everything at my fingertips that I needed to get it done. The hardest thing about directing is balancing all the stuff.

The cast did a great job. What was it like working with the cast?

It was awesome because I failed to mention the first director I followed all my life, John Cassavetes. He is a director of actors and long takes, organic stuff happening. It had to be about the characters. Without those actors (Bill Oberst Jr., Austin Madding, Abby Murphy, Christopher Bower, William Ryan Watson, Joshua Mark Robinson) without those characters being what they were, none of that would have worked.

Do you have a sequel planned?

We have two sequels written already. If everybody loves this and they want more of it, we are ready to go with a couple more.

What other projects are you working on and will you make any more short films?

We just finished a film called “The Broken” and it is in a couple film festivals and we will see what happens with it. I will always do short films. I got a werewolf one that I am looking at. That is my favorite monster that is my favorite character. I really, really want to do a werewolf movie. There are so many short films that are just terrible about werewolves. So that is my chase, I’m chasing that one so bad, I really want to get that werewolf movie made. 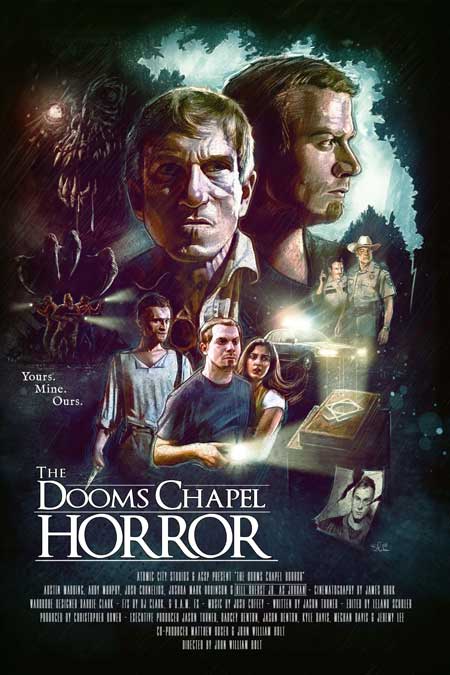 What advice would you give to future actors, actresses and directors?

Man, it’s just hard work because I haven’t even reached that mountain top yet myself. It is an everyday thing. The most is to be kind and courteous and give a hundred percent. Work hard and be kind to one another. I feel it is such a ridiculous luxury that I get to make films. It is absolutely crazy because it is totally playing pretend. I feel so damn lucky that I am getting to do this and hopefully going to get to do another feature film. That is my advice is just keep at it, work hard, be honest and be kind to the people around you because without them I’ve got nothing, absolutely nothing. I got an idea and a dream. Down to the person who was making food for the crew to the guy that is holding a light on top of a building. You can’t do it without them.

John Holt’s Producer gave us an exclusive about working alongside John:

What was it like working with John on Dooms Chapel?

Sure thing. I have been working on short films and assorted projects with John for almost 10 years. We have a great short hand with one another. I know what he’s thinking by the look on his face or if were gonna go again based on the tone of his voice when he yells “Cut!” I think that’s what makes us a great team. John is an Auteur. That is so important, and sadly rare, in a genre like horror. Johns voice is unique and feels familiar especially if you grew up on 1980’s horror flicks.