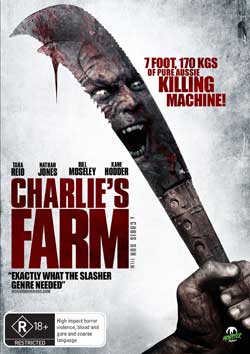 In an effort to do something different, four friends head into Australia’s outback to explore Charlie’s Farm, the site where a violent family met their end at the hands of an angry mob. Despite all warnings, they persist in their horror-seeking adventure. (Source: Chris Sun) and come face to face with Charlie, the deranged hulking son of the family killed by the angry mob. (Source: me)

Charlie’s Farm is a valiant effort by Aussie writer/director Chris Sun. While Charlie’s Farm is no masterpiece in any sense of the word, it’s refreshing to see an atypical attempt in the Australian film industry, an industry full of countless dramas and quirky “comedies” (I use that term very, very loosely) that always seem to utilise the same 10-15 or so actors over and over again.

The synopsis pretty much explains the whole film and as such, there is very little for me to elaborate on… This isn’t a good thing… Anyway, we meet our “victims” who are as bare boned as can be, an inherent trope to the slasher genre, but moreso in this film, and then follow them as they drive to Charlie’s farm. We’re treated to some backstory to the farm, Charlie and his parents, where we see horror stalwart Bill Moseley play (very, very well, I might add) Charlie’s crazy-ass dad. The backstory isn’t too in depth and just gives the bare minimum to introduce Charlie (as a boy) and why he is so f#cked up. After all this “filler” is, er, filled and we’re introduced to two more completely redundant characters for body-count’s sake, the killing starts and runs full throttle up until the credits, however, it is at the sacrifice of any tension, suspense or thrill.

Charlie himself was a deranged and hulking mass of man played competently by Nathan Jones. He towered over Kane Hodder in their scenes which was pretty cool to see considering Kane is a pretty big dude himself. Charlie was one crazy mofo who killed for the sheer pleasure of it all and in painfully fun ways from head crushing (with a tractor) to jaw ripping, to penile severing and throat slitting. Charlie would smile dementedly while doing these heinous chores and it was a welcome change to the typical angry stone-faced psycho we’re usually treated to in this genre. Unfortunately he did suffer from “Killer Teleportation Syndrome”, or KTS for short, a debilitating disease (for the sufferer’s victims, that is), allowing our killer to move from victim to victim in seconds, even though they were quite a distance apart.

Though the third act was entertaining on a gore level, it, like the first hour of Charlie’s Farm, was just filler for it. There was very little in the way of thrills, suspense or real horror here. No drip feeding of kills, no tension of our victims trying to escape, no suspense and no character development. Our victims don’t even meet Charlie until the third act; Charlie (as an adult) doesn’t exist until the one hour mark of the film, and because of this his victims are dispensed of quickly without any suspense or tension.

I think the perfect example I could use to support my rambling is a scene that has one character who Charlie has captured “trapped” inside a wooden box and “secured” via straps to it. “That sounds exciting” you say? “A lot of suspense and thrill could be utilized here” you muse? Well, throw those assumptions out the window, chump because nothing of the sort was attempted. Our character escapes within a minute of the scene’s start with minimal effort, nor did they have to sneak or attempt stealth with fear of being captured by a present (but distracted) Charlie. No, they just take the straps off, kick themselves out of the loosely nailed box and scurry around, Charlie somewhere else during this whole time. Eventually, when Charlie does turn up, things end very quickly. Such a shame… On a positive, I liked how the movie ending atypically and abruptly. It was a welcomed change to the norm.

The other main issue with Charlie’s Farm was the lack of a lead character for us to follow and relate to. If you look at any good slasher film there is always one character we spend more time with and learn more about, even if they’re part of a group. There was none of that in Charlie’s Farm. Everyone was as bare-boned as could be, short of them having a name, oh, and one of them apparently having a big dick, so when the story eventually and inevitably got hairy and scary, you didn’t really care if they lived or died. 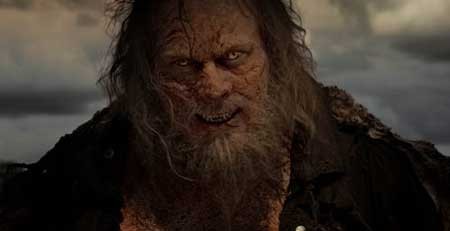 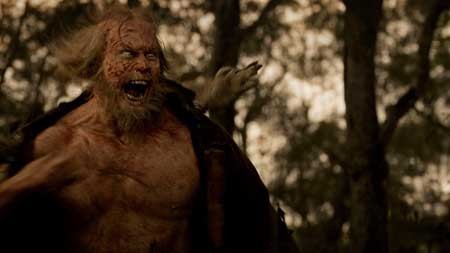 On a positive note, cinematography and sound was top notch. This was a professional effort and enjoyable to see and hear. Acting was a mixed bag though, with Bill, Tara and Sam providing solid performances, while Dean Kirkright stood out with his flat, un-emotive delivery. The dialog didn’t help anyone, ranging from average to cringe-worthy; a polishing or two of the script would have really helped here. The final praise goes to the practical effects which were very gruesome and as realistic as could be. You’d expect nothing less considering the writer/director owns a pretty renowned SFX outfit. 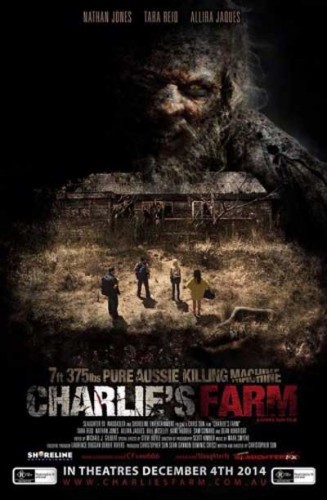 Would I watch this again? No. The lack of any character development and a central person to follow disengaged me from the characters I was meant to care about. The (poor) decision to keep Charlie and any horror hidden until the third act disrupted the pacing and essentially made the first two acts “filler”, causing the script to rush to the finish line at the expense of any real suspense, thrills or tension, ultimately leaving the whole experience unsatisfying.

Would I recommend it to people? If you really must watch this, skip the first hour. There is nothing to gain or learn before this that the synopsis doesn’t tell you and all the kills happen in the 3rd act anyway.