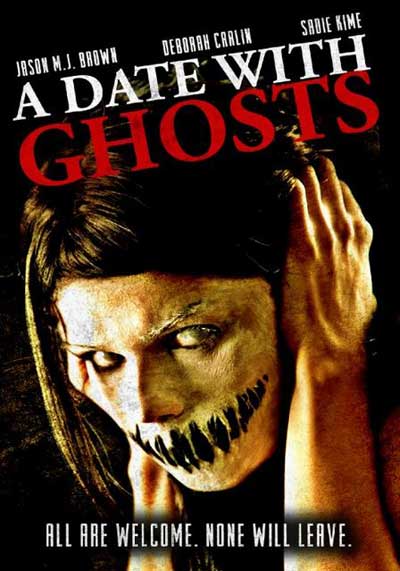 Inside an old, abandoned abbey, the ghosts of monks terrorize people who stumble into it.

A DATE WITH GHOSTS has a consistent beat-of-its-own-drum style and attitude. I can’t rightfully say what it’s about. I don’t know if anyone would be able to: it’s so alienating, disjointed, and experimental. (I mean that in a good way—mostly.) It begins with a woman preparing for her day. She gets ready and goes outside, drives around a bit. She soon finds herself lost, and, the next thing we know she’s in the company of her boyfriend at an abandoned abbey at night. Very grotesque and frightening things then start to occur. 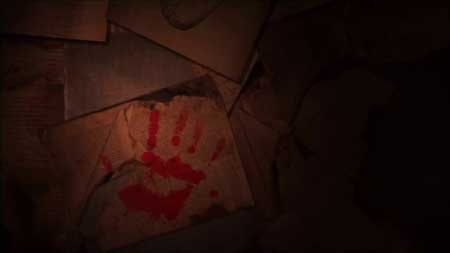 The couple eventually finds a live woman inside a coffin, near a bunch of severed body parts. She has experienced memory loss, and thinks she may have committed homicide. The couple then tries to get themselves and her out of the abbey, but sinister ghosts of monks are after them. They are going to make it quite difficult for them to leave. Quite difficult indeed.

After a little segue of some artsy interior black and white shots of the abbey, which is a dream sequence of a new character, our story shifts gears. Confusing, I know. It now follows a brother and sister who are also trying their best to evade the monk ghosts haunting the abbey. Their paths eventually cross with the woman from the earlier part of the movie. And from there it’s a showdown between the humans and the ghosts.
I think I heard something about a portal to Hell in there somewhere. I’m not quite sure, though. 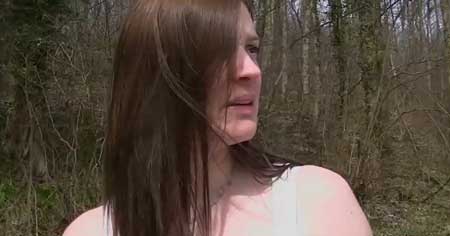 A DATE WITH GHOSTS, written, directed, edited, and acted in by Jason M.J. Brown (his first feature length film) is one weird indie horror flick. Its atmosphere and grainy, shaky, amateurish camera style—or should I say camcorder style—take it a long way out. The ghosts, for the most part, look quite creepy. The makeup effects on them are minimalist . . . and the camera is careful in not showing much more than their robes. Their sinister mugs provide plenty of potential chills. 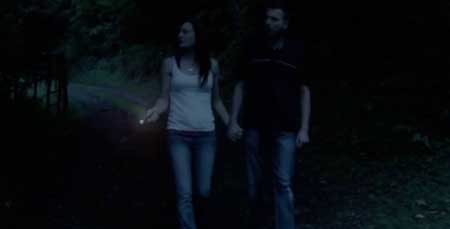 The camcorder also soaks in all kinds of good, moody, creepy lighting. Shadows are exploited wonderfully. Everything, considering, looks great . . . for such a low budget.

The dialogue is sparse. The music is offbeat, too. It mixes all sorts of styles in its soundtrack, and, often, the sort of TEXAS CHAINSAW MASSACRE-type grating noise seems the most effective—enhancing the creepiness the most. 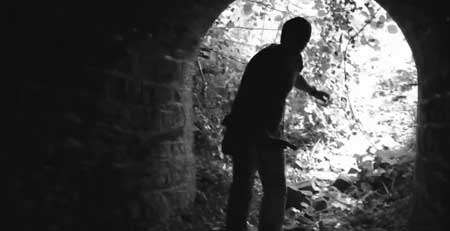 There is almost no continuity when it comes to sets and daytime versus nighttime. Its shooting is willy nilly. Blatantly different buildings are used as the abbey, and it’s night then day then night again and back to day. I’m not sure if this was intentional . . . some kind of middle finger to conventionalism. Ultimately, I’d imagine it was just the filmmakers making due with what was available to them, at a given time.

A DATE WITH GHOSTS is a hard movie to really get sucked into, because it’s so alienating. You don’t know who the characters are. You don’t know what’s happening, why it’s happening, etc. It’s hard to really care. As far as weirdness for weirdness’s sake goes, it’s respectable. But, as far as being a satisfying watch, it makes too little sense. We need more robust, fleshed-out characters. We need more dialogue. 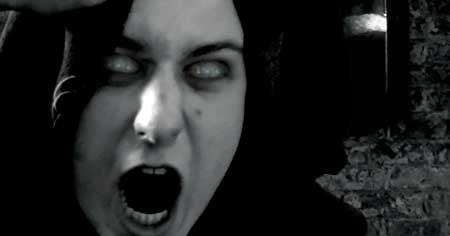 It meanders and rambles too much. Its experimentalism and “indieism” are cool but don’t give us enough to entertain and propel us through even the short (70ish minutes) run time.

Still, it’s worth a watch for its aesthetics—and the fact it provides such a radically different horror experience. The crowd who liked movies such as THE OREGONIAN I could definitely see getting into A DATE WITH GHOSTS.