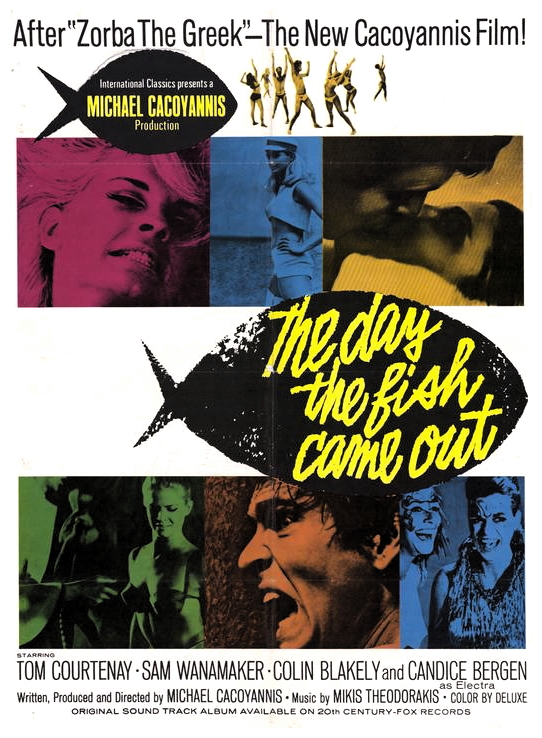 SYNOPSIS:
“See, there’s these little brown eggs that are radioactive and shit and so dangerous that the US military agents put them in a large solid lead cube, which they loose on an island that has these cult-like dancers the military sees as gay because of everyone having cut-out fashions with mesh and lace-up sides and every possible kind of pastel colour, but the erratic dancing is interspersed with head-to-toe white-wearing guys saying ‘Salaam’ to everybody in the outdoor restaurants and the four shepherds who live on the island but who are confused with agents who – having lost their clothes except for banana hammocks – are stealing laundry off o the peasants’ clothes lines and fashioning robes out of it, while searching for a phone to call in the problem, but too late! One of the shepherds has cut through the lead cube with a magic chemical that eats through everything (except for the jar that it is in and the hose that comes out of the jar) and his wife absently throws two of the radioactive eggs in the water supply and all the wildly dancing gay-touched but zombie-like tourists notice, all the fish rising to the top of the black sea. The End. See?” (courtesy IMDB)

REVIEW:
Thematically, science fiction films during the sixties at last began to diversify and to get away from the bug-eyed monsters that typified the genre during the fifties. There is no one film made during that decade which can be said to be a typical sixties science fiction film, though the new decade did see a small trend in satirical science fiction films such as Dr Strangelove (1964), The President’s Analyst (1967), Barbarella (1968), The Bed Sitting Room (1969) and The Day The Fish Came Out (1967). The Day The Fish Came Out was a black comedy written, produced, designed and directed by Greek filmmaker Michael Cacoyannis and inspired by an actual incident in 1965 when a strategic bomber collided with an aerial refueling plane over Spain, resulting in the temporary loss of four nuclear bombs. 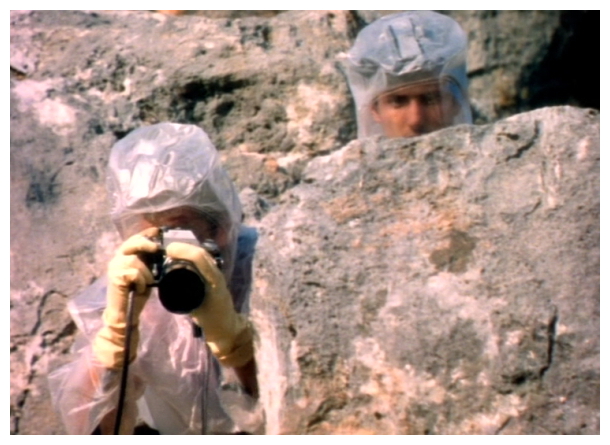 The film is set in the then-future year of 1972 on a small Greek island which becomes the centre of frenzied activity when a similar incident occurs in the sea nearby. The bomber is not only carrying two nuclear bombs but also a mysterious ‘Doomsday Device’. To prevent this knowledge to become widespread, the NATO recovery team, led my Sam Wanamaker, arrive on the island disguised as garishly dressed holiday-makers. However, this creates the impression that the island has suddenly become the ‘in’ place of the jet-set and soon, to the islanders amazement, the arid unattractive little island is swarming with trendy tourists, include the enigmatic Candice Bergen (although top-billed, Ms Bergen doesn’t make her first appearance until 68 minutes into the movie). 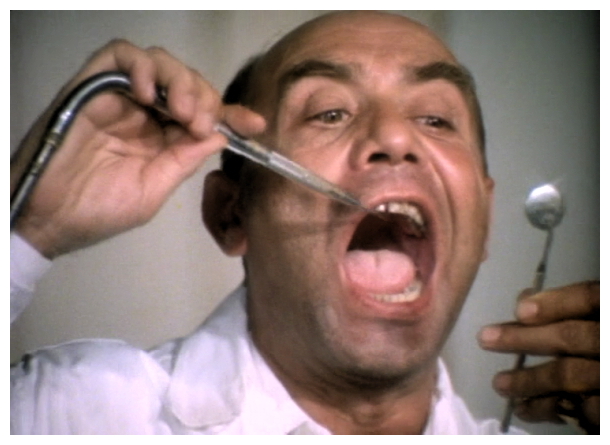 Meanwhile a poor fisherman has recovered a strange metal box from the sea which he believes contains valuables of some kind but resists all his attempts to open it. Finally he succeeds with some stolen acid, but all he finds inside are a number of sponge-like objects which his wife angrily throws into a nearby reservoir. The box, which the fisherman hurls back into the sea, contains deadly viruses and the film ends with all the fish in the sea starting to die, a sign of what is to come on a worldwide scale. The film is a strange mix of grim satire, trendy sexual posturing and slapstick – the two pilots from the crashed bomber (Tom Courtenay and Colin Blakely) spend the entire film hiding on the island in a state of undress – but it fails to impress on almost every level. 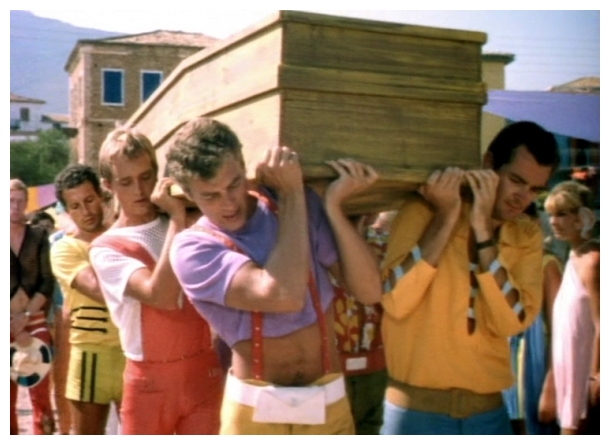 However the final shots of the dead fish floating belly-up in the black sea while the tourists, oblivious to their impending doom, dance with frenzied abandon on the beach have an undeniable impact. The ending is abrupt to say the least, but at last the title makes sense. Courtenay and Blakely make a truly odd pair and their buddy routines are only sporadically amusing, if at all. Fans of theirs owe it to themselves to see this, though, as they parade around for most of the film in the flimsiest of white briefs. Wanamaker is forceful and displays quite a fit body of his own. His team of men wear the most bizarre and hallucinatory clothing imaginable. Nearly all of them are drop-dead gorgeous and their clothes are built to show off their assets as much as possible. 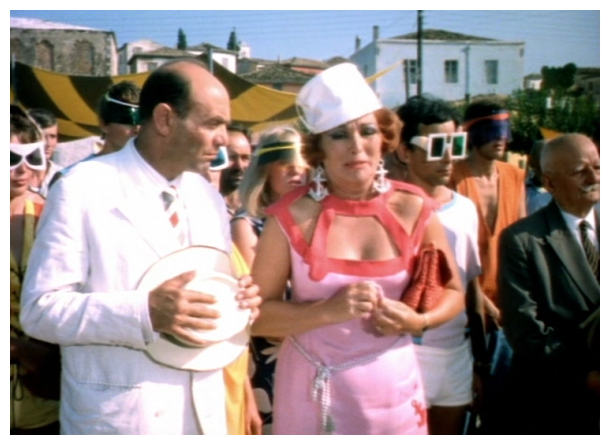 Also memorable are the music by Mikis Theodorakis, the opening credits sequence by Maurice Binder, and Candice Bergen‘s costumes as she certainly does impress with her stunning looks. Never more tanned nor blonde, her clothes make the most of her youthful body as well and she gives the film a lift with her energy, even if her acting ability had not yet bloomed. The film is rather patchy and confusing at times, but there is a story at work here and some thought has been given to the evils of greed, dominance, militarism and materialism. The trouble is, it’s not as coherent as you might hope. It’s with this thought in mind I’ll ask you to please join me next week when I have the opportunity to burst your blood vessels with another terror-filled excursion to the back side of Hollywood for…Horror News! Toodles! 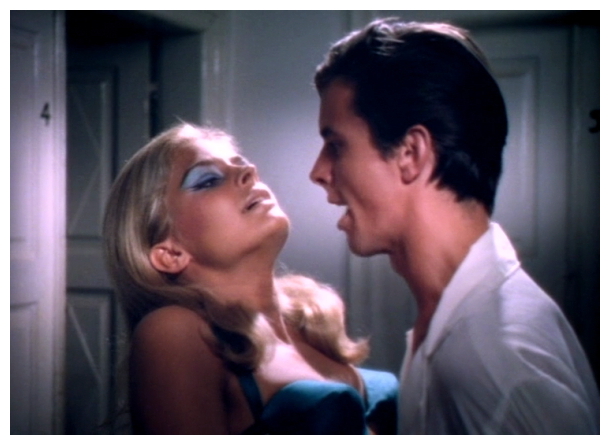 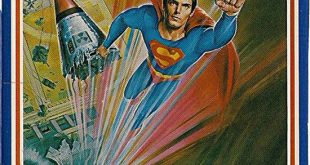