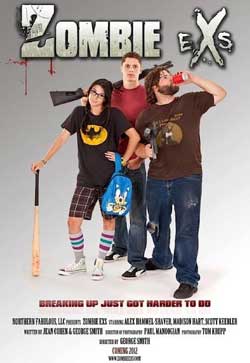 The newest fad in H2O drinks turns a lady’s man’s many ex girlfriends into zombies who have one idea – getting back together with him dead or alive.

I dig me a good comedy-horror. Love them. Cherish them. To me, there’s nothing more satisfying than kicking back on the couch with some form of munchable item, a soda and watching an entertaining comedy-horror. Needless to say, I kicked back and munched while watching Zombie Exs, a somewhat serviceable low-budget comedy-horror.

The film begins with the dodgiest drink stall in history and a lady in a lab coat (?) giving away free samples of the latest sensation in hydro-hydration, HAPI WATER. This lab coat sporting blonde, who guzzles the water down like it’s, er, water, drops dead and foams at the mouth for no apparent reason (hint: it’s the water).

We are then introduced to our hero, Zach (Alex Hammel-Shaver). A handsome lady killer who really loves to annoyingly commentate on his own gaming prowess. He’s immediately dumped by his Hapi Water drinking girlfriend and heads to the local pub to meet up with his mates who begin to recount his numerous ex-girlfriends and the reason why he dumped, or was dumped, by them. We are also introduced to other two other main characters, meek and geek-hot Lilly (Madison Hart), who has trouble voicing her love for Zach, and Dan (Scott Keebler), Zach’s slightly chubby slacker mate and Zach Galifianakis look-alike.

Dan has entered Zach into a dating TV show, and unknown to them, the producers have brought along 5 of Zach’s ex-girlfriends, the VERY ones Zach and his mates spoke about at the bar, as contestants on the show. There is also, for some reason, shitloads of Hapi Water around for the ladies to drink, and before Zach even gets on set, the exs go into an enraged fit and start eating the host and anybody else within arm’s reach.

Shenanigans ensure. Zach and Dan escape the studio and eventually meet-up with Lilly and together the trio battle through the zombie apocalypse and Zach’s now, for some unknown reason, un-dead ex-girlfriends as they learn about the insidious nature of Hapi Water, the company producing it and a possible cure.

Zombie Exs is like a very, very poor man’s Scott Pilgrim vs. the World, but with zombies, less band and ex-girlfriends instead of ex-boyfriends…. You will instantly notice similarities between the two. Zombie Ex’s even does a cool little animated outro for each of Zach’s ex-GFs when they’re killed, similar to the animated shenanigans in Scott Pilgrim. Not a bad thing and a welcomed treat to what is an amateurish affair.

Cinematography was quite sub-par. You could see what they were going for, but you could tell that the director and DOP never quite got the exact shot they wanted. It just felt, off.

Acting was quite good. Nothing Oscar worthy, but not grating to the ears and/or soul either. Alex’s voice used for Zach was somewhere between Keanu’s Ted character in Bill and Ted’s Excellent Adventure and Keanu himself. Kind of annoying to listen to. Scott and Madison also performed adequately and the dynamic between the trio was naturally good. They seemed comfortable with each other and that showed. The banter between them was quick and slick. The three male mates at the bar with Zach were abysmal and should ever, EVER be filmed again.

The story had lots of conveniences and enough holes to make a whorehouse blush. Some were excusable as they facilitated the comedy, but others were there due to lazy writing. Things like the foaming death at the start. No other person foamed at the mouth OR EVEN died after drinking Hapi Water, it instead turned them into crazed people, not even zombies. People who turned then mysteriously became zombies for some reason, decomposing because, well, you know… I hope you do because I don’t! For the record, if these people bit you, you then turned into a crazed human/zombie too, and that’s fine in my eyes. What I did like though was the fact that they became slow zombies, not the new fan-dangled fast undead you young folk are into these days. There was nothing show stopping in terms of these holes, but a lot could have been cleaned up to make the script tighter. Just because a script is a comedy, it doesn’t mean the writer should be lazy with these things. Every little bit helps in making an okay script, great.

Comedy-wise, there was quite a bit to be had though it was hit and miss. There was a gag or two, or three in every scene. It wasn’t hilarious by any means, but it kept me entertained enough throughout the film and I did have a smirk on my face for most of it. The horror did facilitate the comedy in areas but I still think this could have been emphasised and worked on a lot more. I liked when the zombies turned into a crowd surfer’s best friend when cool punk music was played. It was clever and utilised the horror well. Two of Zach’s zombie GFs kissing for no apparent reason other than to make Dan get a semi was not a good example of comedy as there was no setup to make this feel organic.

Character development was a bit too minimal for my liking. Enough was given to know Zach’s story and Lilly’s, and you did connect and root for them, but there were no character arcs in the usual sense of the word. Zach didn’t have a flaw to face, a fear to conquer, or something to really learn from. He remained the same during the entire adventure. No matter what, any good movie makes the character learn or grow from their experience in some form or another, regardless of the genre. In Shaun of The Dead, Shaun’s flaw was that he was an unambitious slacker. He conquered this flaw by taking charge and leading his group of friends to safety. In Army of Darkness, Ash’s flaw was his self-centred attitude. He conquered this flaw by rallying the castle’s inhabitants to battle the deadites instead of fleeing back to his own time. An arc for the main character separates a good film from an amateur one. Zach does spout dialog about his fear of commitment, but his GFs were all crazy in some form of another so he had good reason to dump them. His commitment line falls flat because of this and the fact it wasn’t shown in any way prior. Zach is kind of given a moment of realisation for his love for Lilly, but it’s hardly an arc and felt forced only because he had no semi-realisations before this moment and he returns to his old ways immediately after. 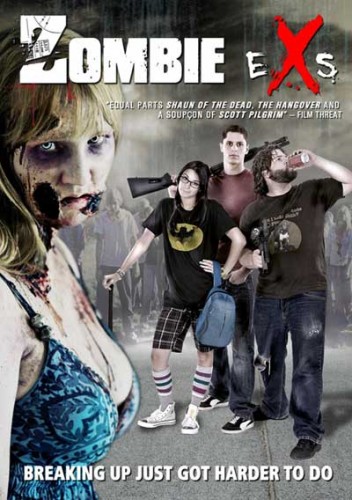 The concept of Zombie Exs had a lot of potential to be great, but unfortunately it was squandered in my eyes. I would have loved to have seen the GFs given more emphasis, considering they are the bloody title of the film. Once they became, er, zombies, they just disappeared into the mass of undead, popping up pretty much only when they were to be killed off in a matter-of-fact way. They did have some funny lines to spout, but it wasn’t enough to me. What would have been great was maybe giving them like a mini-boss fight kind of thing. For example, one Ex always sucked a lollipop, it would have been awesome if this was utilised in killing her in some way. Zach didn’t even have a hand at the death of most of these exs which felt off to me. He should have ended them.

At the end of the day, Zombie Exs is a serviceable comedy-horror and a commendable effort by the writers. You can see the love put into the film. You can see that everybody had a blast making it and there is quite a bit to enjoy. If more time was given to re-writes, I could envisage the script being a lot stronger and entertaining as the concept had real potential. The whole film, from the script, direction, acting and camera work had a glimpse of greatness to it, but it’s just never realised.

I wish the writers all the best on their next adventure and look forward to their next penned attempt.

3 out of 5 zombie-inducing bottles of water.