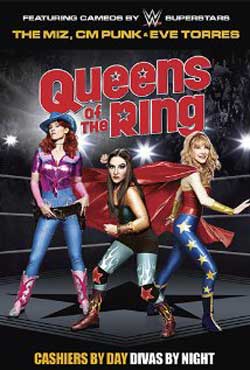 A woman-who was recently released from prison-tries to reconnect with her estranged son (who is a huge wrestling fan) by becoming a professional wrestler.

Review-I’ve loved professional wrestling for the biggest majority of my life, and as a matter of fact I would put it right up there with horror films, comic books, and video games on my list of things that I am really into. There was a point in my life when I actually considered going to wrestling school and becoming a wrestler myself but sadly enough I never actually carried through with it (which is one of the biggest regrets of my life to this day). Even though Queens of the Ring isn’t a horror flick I still thought that it sounded mighty interesting and something right up my alley so I was pretty eager to see it as I’d heard a lot of great things about it. It turned out to be a very fun and uplifting little French film and I was very glad that I had the opportunity to see it for myself.

One of the main reasons that I enjoyed it is due to the fact that it is legitimately funny at times. It succeeded in making me laugh without being crude or obnoxious like over half the so-called comedies that I’ve been forced to endure over the last couple of years. I appreciated the fact that it didn’t resort to gross-out humor or just a number of dick and fart jokes over and over again and its humor really worked. I wasn’t falling out of my chair and rolling around on the floor laughing my head off or anything but there are several moments where the film was genuinely funny without trying too hard and I had a good chuckle as a result. I normally don’t particularly care for comedies because I usually don’t think that they are funny or even worth my time but that wasn’t the case at all this time around.

I also really liked the premise as well. I thought that it was well-written and had a lot of heart. It is obvious that the people behind it have a great deal of knowledge, respect, and love for the word of professional wrestling and understand what it takes to work in the industry. I thought that it was interesting to see behind the curtain so to speak to see how people went about training to become a wrestler and some of the many challenges that they face as they try to make a name for themselves in the business. Of course the movie isn’t exactly realistic in certain respects as it takes years and years for most wrestlers to build a fan base and become a big name in the business but I was able to overlook this and enjoy the movie for what it was. 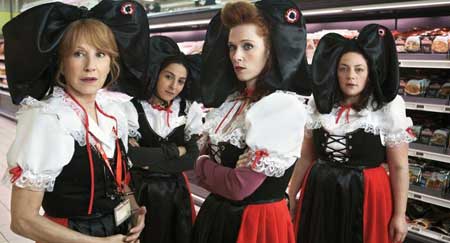 I think that the characters really helped make the movie something special as well. I loved the main character Rosa (perfectly played by Marilou Berry) and really wanted her to succeed in doing something big with her life that most people only dream of and reestablishing a relationship with her young son who had lost all faith in her. It was very easy to root for her since she is such an underdog and I think that many viewers will feel the exact same way about her as I did. I also dug her co-workers at the supermarket who got dragged into the world of wrestling with her as well. I thought that Colette and Jessica were both great characters and I loved the wrestling gimmicks that they eventually come up with as well as their individual stories that develop throughout the movie.

Other than Rosa though my other favorite character was the mentally unstable (and absolutely hilarious) Viviane. I loved some of the things that she did and said and without a doubt the funniest moment in the film takes place when she shows off her initial idea for her wrestling gimmick to the retired professional who is training her. The entire scene is comedy gold if you ask me thanks to how weird and out there it is and is definitely worth seeing. This film has some wonderful characters that you actually care about and I thought that they all rocked. 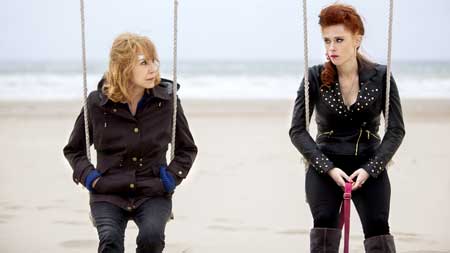 Overall I loved Queens of the Ring. I thought that it was a very good movie and I had a lot of fun watching it. It is just one of those charming, uplifting movies that makes you feel good inside for a number of reasons and I am glad that I got to see it because to be honest these types of movies are few and far between in today’s day and age. If you aren’t in the mood for a horror flick and want to see something on the other end of the spectrum I highly recommend you give this film a shot. I think that you will enjoy it as much as I did and it may just become your new favorite non-horror movie that you pop into the DVD player whenever you want to watch something lighthearted and entertaining.