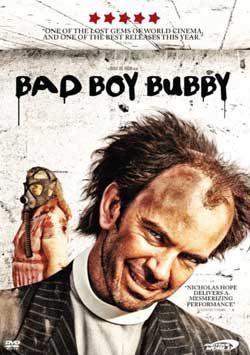 Bubby has spent thirty years trapped in the same small room, tricked by his mother. One day, he manages to escape, and, deranged and naive in equal measures, his adventure into modern life begins.

Rolf de Heer’s Bad Boy Bubby is a strange one, indeed. This movie centers around a man named, what else, Bubby (played perfectly by Nicholas Hope in his film debut; he would later go on to star in Hal Hartley’s Henry Fool as well as play Old Man Smithers in 2002’s live action Scooby-Doo movie). Bubby’s life is a mess, not that he really knows it. For the past thirty years, he has lived in a tiny one room apartment with his mother (Claire Benito), who has convinced him that outside the front door is poisonous gas, and to leave is to die. Then again, she’s also convinced him that he should have regular sex with her, too. And besides all of that, there’s something not quite right mentally with our poor protagonist; his verbal skills are pretty much those of a parrot, where his only spoken dialogue is repeating others (without truly knowing the meaning behind the words, which gets him in quite a bit of trouble). He’s kind of a less adjusted, but more eloquent Karl from Sling Blade.

If it sounds weird so far, it’ll only get weirder. Bubby has a “pet” cat that wandered in, and he goes back and forth mimicking the animal and (unknowingly) torturing it, until finally he wraps it in plastic and it suffocates. This, of course, isn’t reason to get rid of it, and so he keeps it around.

One day, Bubby’s dad (Ralph Cotterill) comes back, dressed in a priest disguise for who knows what reason, and he is invited to stay. He didn’t know he had a son, and quickly capitalizes on his new discovery by berating and insulting poor Bubby, eventually kicking him out. So Bubby does what any other angry child of a broken family would do: he wraps both of them in plastic and lets them die. And from here, the movie becomes a bit of a travel/adventure story, with Bubby exploring the great unknown that is everything outside of his apartment.

One thing that impressed me about Bad Boy Bubby is Hope’s portrayal of Bubby. All too often, Hollywood has ended up condescending and insulting the mentally challenged when portraying them on film (see Rosie O’Donnell is Riding the Bus With My Sister for one of the most offensive examples). But Nicholas Hope played the character well, making us feel sorry for him for what happens to him, not just because he exists. At times, he makes you smile, and others he makes you sad, and sometimes he makes you angry. That, of course, is called acting.

This movie is pretty funny, really. Once Bubby realizes there is no poison gas, he sets out on quite the adventure. He meets ladies who want to be with him, thugs who want to beat him up, and a band that wants him to become a regular member. He still doesn’t communicate well, but is able to make do with the phrases he picks up. Well, usually he is; sometimes his mimicking gets him in a lot of trouble, like when he gets arrested, and later beaten, for copying his father’s groping actions toward his mother. It’s not until the end, when he is brought into an assisted living facility for the handicapped, that his true strengths can be seen, and to be honest, it warms your heart.

If I had to make a comparison, I’d say that Bad Boy Bubby is kind of like the Australian version of Forrest Gump, but for people who prefer reality to the fantasy world. Throughout Bubby’s adventures on the streets, he grows and learns and discovers how life really is, not in a one room apartment with a conniving mother, but in the real world. There is just as much pain out there as there is love, and he just has to try and make sense of it all. Kind of like any of us, really. 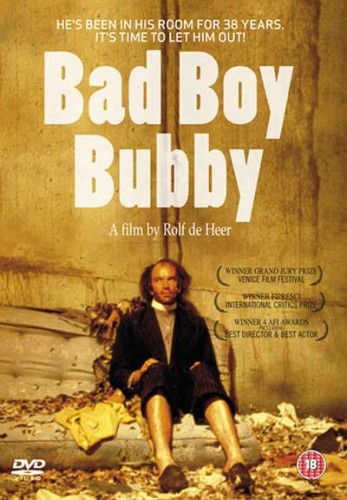 This isn’t a horror movie, per se, unless you consider the horrors that Bubby lived with for the first thirty years of his life. There is some random violence involved, some sex, some telling god where he can go. But mostly it’s the story of a young man exploring the world, and it’s a trip that I was more than happy to go on. Two thumbs up for Bubby. 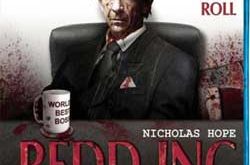