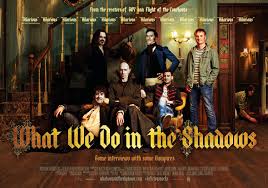 Meet Viago, Deacon, Petyr and Vladislav – three flatmates who are just trying to get by and overcome life’s obstacles – like being immortal vampires who must feast on human blood. Hundreds of years old, the vampires are finding that beyond sunlight catastrophes, hitting the main artery, and not being able to get a sense of their wardrobe without a reflection, modern society has them struggling with the mundane like paying rent, keeping up with the chore wheel, trying to get into nightclubs, and overcoming flatmate conflicts.

In the tradition of films like Young Frankenstein (1974), Love At First Bite (1979), This Is Spinal Tap (1984), Dead Alive (1992) & Shaun Of The Dead (2004) comes What We Do In The Shadows, a wildly inventive and funny mockumentary from writer/directors Jemaine Clement & Taika Waititi. It tells the tale of Viago (Waititi), Deacon (Jonathan Brugh), Petyr (Ben Fransham) & Vladislav (Clement) – four vampires living together in a decrepit mansion located in a Wellington suburb. And as this is a comedy, you’d be right in thinking that they have the same problems that four swinging single men with different perspectives on life (& death) might have living together in a house. For instance, The dishes haven’t been done in five years or so. They can’t really tell how they look before they go out clubbing in the evening because they can’t see themselves in a mirror (so they have to trust each other’s drawings). As a matter of fact, they can’t even get into a lot of clubs because they need to be invited in! They have turf issues with the local pack of werewolves (“werewolves, not swearwolves!”) as well – all issues that I would’ve never thought about. The beauty of the film is that al of these issues (and more), are indeed kind of plausible if you happen to be a centuries old vampire living in the year 2014. 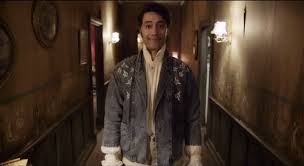 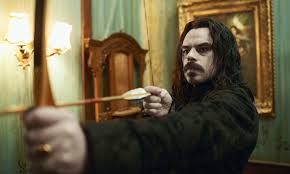 Viago looks/sounds like a foppish, new wave rocker from the eighties, but he’s the most genteel of the quartet. Vladislav fancies himself a Vlad the Impaler clone. Petyr is the anti social, Nosferatu-ish one & Deacon looks at himself as the hippest (& best looking) of the crew, yet he seems to be the most misguided of them all. The script takes every possible trope of the vampire film that you can imagine (crucifixes, bats, mirrors, werewolves, familiars, sunlight, etc) and spins them all in truly imaginative and funny ways. The witty script takes all of the traditional folklore relevant to vampirism and places them in a contemporary setting with snap, verve and tons of style. The cast is fully committed to the madness and they all give truly heartfelt & sincere performances, keeping their collective tongues firmly in cheek. 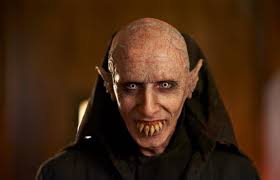 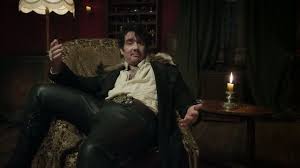 Since the film is set up as a documentary, it has a grainy, low budget look to it. The premise is that the vampires are allowing a group of documentarians to follow them as they go about their nightly lives (The vamps let the film makers wear crucifixes for protection). What’s almost immediately obvious about the vampires as the cameras begin to roll, is that their lives are about as mundane as yours and mine might be. As a matter of fact, a lot of the humor in the films comes from the overwhelming sense of how absolutely rote their lives are. They’re definitely monsters – but they were all human once, their lives as creatures of the night have never fully overwhelmed the innate human foibles that all of them still have. They’re just like you & me, except they have fangs, feed on human blood, and are eternal. 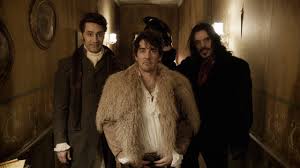 The special effects will be very familiar to all of you, but the script takes pains to make sure to use them to effectively lampoon the powers that come along with being a vampire. There’s also a fair amount of bloodletting (Viago continually has trouble catching the right vein to feed on) as well, but nothing too extreme. Most of the gorier scenes reminded me of the Saturday Night Live skit featuring Dan Ackroyd as Chef Julia Child, cutting herself and bleeding out as she continues to cook. It’s bloody, but hardly offensive. It’s really just a ton of cheesy fun!

What We Do In The Shadows is so good that I immediately watched it again once it was done, and I suspect that it’s going to be a film I’ll be enjoying for years to come – it really is that good. Perfectly cast, expertly written & hilariously deadpan, it works as both a comedy and a horror film (Petyr is actually pretty darn scary). Inventive, creative and consistently engaging, it’s easily one of the best films of the year, and one of the funniest comedies (Horror or not) ever produced. A must see! 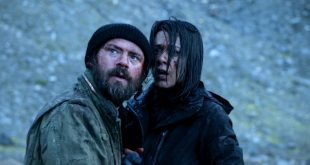 PiFan film fest, Day 3: Blood Glacier (AKA The Station), SPEC: Close, and What We Do in the Shadows 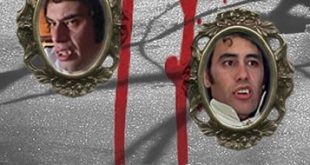 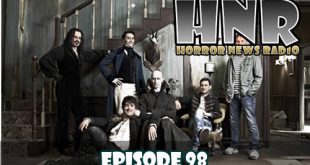 Podcast: Horror News Radio – Eps 98 – What We Do In The Shadows