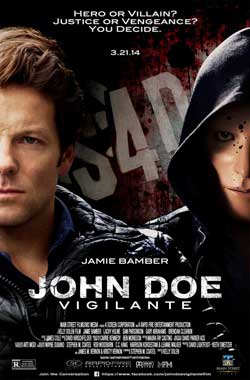 In “John Doe: Vigilante” an ordinary man fights violence the only way he knows how – by killing one criminal at a time. Hero or villain? Justice or vengeance? You decide.

A masked vigilante going by the name of ‘John Doe’ dishes out violence and death to those that deserve it on the streets of Sidney. Following his arrest, esteemed reporter Ken Rutherford (Lachy Hulme) arranges to sit down with the man behind the mask, (Jamie Bamber), hoping to get an insight into what made him do it. During the course of their interview, John Doe recounts the story behind his first murder, his relationship with the media, the vigilante gang that took to the streets to support him, and the 33 lives he claimed.

As the story unfolds, it becomes clear that John may have had very good reasons for his violent spree; but is he finished? Does he have one last criminal to scratch off his list?

The revenge/vigilante film has become hugely popular again in the last ten years, and while it’s a sub genre I do quite like, it has started to feel a bit stale again. Increasingly nasty character motivations and violent retributions to match hasn’t made the films any better, just simply made them more violent and nasty than the ones that went before it. So how does this late entry from Australia hold up against the like from the USA and Europe?

Pretty well, for the most part. Firstly, the filmmakers have taken the time to allow for a somewhat interesting debate to spring up on the nature of moral justification of violence, something that is usually absent in similar films (apart from the obvious, oft-quoted Nietzsche ideology; ‘beware that, when fighting monsters, you yourself do not become a monster…”), but here, the lead characters spend a good deal of time actually discussing it. Should the police waste tax payers money hunting down those that are only interested in punishing the guilty? Where is the moral line and when should it be crossed? Should the need for vigilantes really reinforce the need to re-evaluate our justice systems that allows repeat offenders to slip through the system? It’s a heady subject matter, and not one easily resolved anyway.

This theme runs throughout the entire film, and as Rutherford gathers his interviews from the chief of police and the main reporter on the story, we can certainly see which side of the debate the filmmakers lie on. All the criminals are paedophiles, rapists and killers, and all are dealt with in a brutal fashion. This in turn gets the audience on the side of John Doe too, and eventually leaves little wriggle room for where our moral opinion should fall.

The film backs this up with some great style, and even though plenty of scenes are intended to be the tapes sent by John Doe to the media, even this footage looks crisp and clean. Sure, it might take the grittiness and realism out of it, but it made me remember how much I missed seeing a well choreographed fight scene, and thankfully you get plenty of that here. I particularly liked the lengthy shot in which the sex predator priest is dragged around the house, with his head repeatedly smashed into objects. Director Kelly Dolen wisely keeps the action tight and the violence brutal and to-the-point, opting for entertainment over queasy shock factor.

The film isn’t without its flaws, however. My main grumble is the lack of focus on characters, especially in the first 20 minutes or so. We never really get to feel like John Doe is our main character here, and that might be argued to be the point; he is merely the catalyst for affecting all of these people’s lives. But the film suffers for it, as it continues to constantly jump back-and-forth between the past and present, and quite often between several different characters. It creates a feeling of fatigue in the viewer, and when the film finally finds its groove, it might be too late for some. The tension eventually sets in around the start of the final act, and the climax is handled well, but probably has less impact due to us not getting to know certain characters very well.

At the core though is an emotional story that does eventually cut through the editing. The performances are good, though Jamie Bamber is great in the lead role. And while we do feel we get to understand him a bit better by the ending, I just wish could have gotten a bit more focus on him consistently throughout the film. These issues aside, though, if you fancy a fast-paced revenge film that will serve up a few twists and turns, you could do far worse than John Doe: Vigilante.