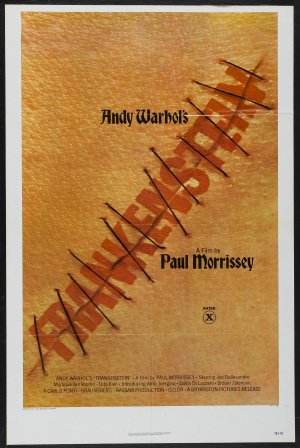 Paul Morrisey’s 1973 film Flesh for Frankenstein, starring the inimitable Joe Dallesandro, Udo Kier and Dalila Di Lazzaro, will be screened tonight on 35mm at the beautiful Nitehawk Cinema at 136 Metropolitan Avenue in Brooklyn, NY at midnight as part of their September “Nitehawk Nasties” series.  From the press release:

Many versions of Dr. Frankenstein and his monstrous creation have been made since Mary Shelley first wrote her gothic novel Frankenstein in 1818 but none quite as sickly amazing as the Paul Morrissey directed Flesh for Frankenstein. It is one of the more, shall we say, unique adaptations of the story as it takes elements from the book, James Whale’s Frankenstein and Bride of Frankenstein to make one over-the-top affair. Udo Kier stars as the fabulously mad scientist obsessed with creating his own beautiful monsters and for saying such truisms as, “To know death, Otto, you have to f*ck life in the gallbladder.” Featuring really gorgeous people and outlandish gore, this film certainly doesn’t tackle the Frankenstein story in a conventional way but its inventiveness and insanity is what makes it so incredibly good.