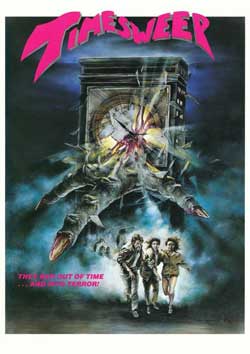 A group of people—filmmakers, local history buffs, students, and journalists—all gather to explore a now-defunct, dilapidated movie studio. They soon learn, however, that time—past, present, and future—have coalesced into one, and entities from the past and future travel through the movie studio, often terrorizing its visitors. The group must try and escape the building, but it is surrounded in a deadly, flesh-eating fog.

Wow, “distributed by Carrera Topline.” I admit, TIMESWEEP is the only film I’ve seen released from this distinguished distribution company (defunct since 1988). Wait. That’s not true. They put out TERROR FORCE COMMANDO, AMERICAN COMMANDO NINJA, and DEATH BY DIALOGUE, didn’t they?
Never mind.

Director/Writer Dan Diefenderfer [to potential investor]: Look, I got a thoroughly forgettable script I wrote while high out of my mind. Not only that, I own a fog machine. We can’t lose. Really. I mean there’s no way. 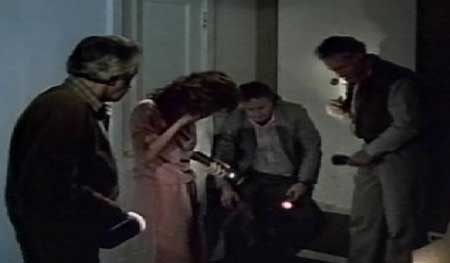 Investor: Listen, kid. I don’t back no movie unless I know there’s a big monster runnin around rippin the clothes offa women.

Diefenderfer: There is, though! My movie’s got that … and more.

The Midwest Historical Society has picked the wrong day to tour Dunbar Studios. So has a student film crew and news team. They all just want some honest erudition—a little history lesson—you know, a connection with the past.
They get a history lesson, alright. With a flash of light people are bleeding all over the place and … and … and … all time, like, co-exists, man. No work of history, though, could ever have prepared them for how chock full of aliens, zombies, acidic fog, lizard monsters, violent cavemen, killer bugs, and all-around gore the past—and future, I guess—really was/will be. They’re caught inside a timesweep! “We’ve been cut loose in time!” they say. And they can’t get out. Believe me. They try. For a long time (most the movie), they try. 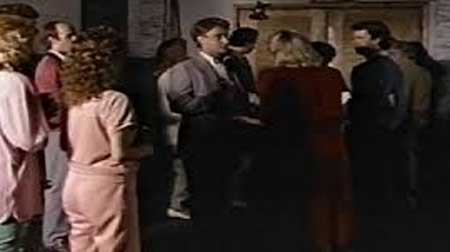 Will they EVER escape?

*SPOILER* Yes, but only seconds before the end credits roll.

These poor saps. How could they have known that some stuffy old professor amongst them knew all about the timesweep—that it was going to happen inside Dunbar Studios on that very day. Yeah, he knew. And he drug everyone in there intentionally … just so he could get his dead girlfriend back.

Of all the cheap, lowdown, dirty tricks to get your dead girlfriend back …

Some of the zombies from the past (or future?) apparently died during their Billy Ray Cyrus phase of dress. And for a cop in the midst of the Democratic National Convention riots, this guy sure seems bored. Is that a roman soldier? Who pissed off the caveman? Is “this whole damn place an anachronism?!!” 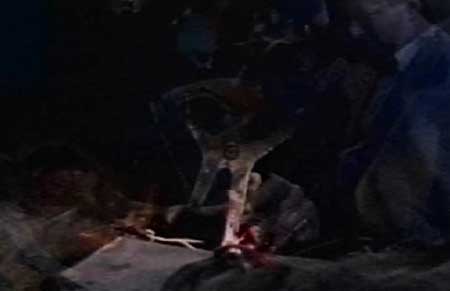 Yes. But, but, but … that’s okay, because it pays homage to OTHER bad movies from the ’60’s and ’70’s. Yeah, you can tell because lots of the characters have last names like Arkoff and Lewis and stuff. That’ll redeem it, all right … some postmodern self-awareness. How hip. TIMESWEEP is ahead of its time (no pun intended).

Yeah, all that bad acting, it must be intentional. Just like all the endless plot-holes and nonsensical, uneven pacing.
It looks like the joke is on us.

So, in a nutshell, should you see TIMESWEEP? I mean, you’re busy. There are only so many hours in the day. Life is short. Should you?
Go get that mother-#$*#-ing VCR out of your garage and cough up the dollar-fifty plus shipping on eBay immediately! TIMESWEEP isn’t just a movie. It’s a sensory experience intended to be felt rather than understood. 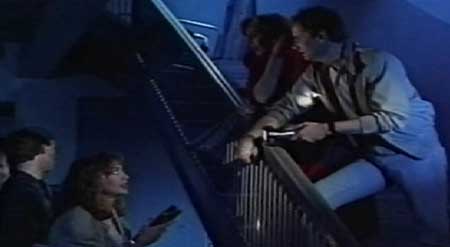 It also went straight to video.