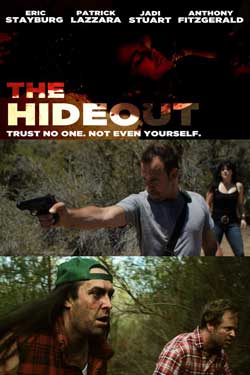 The Hideout is about five thieves that retreat back to their hideout after a heist. Slowly, they begin to distrust and turn against one another and then chaos erupts.

Of all the movies I’ve been obliged to suffer, this one earns a special place deep within the bowels of movie hell. It’s supposed to be a zombie film, a topic with the potential to be infinitely disturbing and entertaining, yet it drags at a pace not many, if any, will willingly endure. The total incongruity dominant in the film, its audial failure, its weak plot (and even weaker acting) combine to wreak the poor soul viewing this catastrophe. I would blame the non-existent budget for its issues, but even this excuse cannot justify what appeared a high school film class production played by sweaty-looking and tired adults. 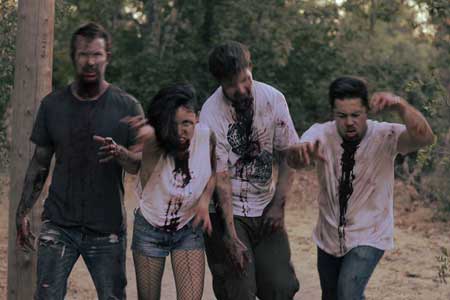 The film starts where it will eventually end (a technique employed by many film makers). You see, part of The Hideout’s problem is that it strives to be much smarter than it could ever be. It collects different cinematic approaches in its murky hodgepodge—taking the theme of sudden mistrust among a small, closed-off group, a theme espoused beautifully in The Thing, as well as attempting to incorporate the unexpected plot twist where the protagonist’s realizes his reality was in fact the fantastical mental weavings of his troubled mind. Neither of these approaches save the film. In fact, they only serve to intensify the movie’s overwhelming awkwardness. At its conclusion, you’ll sit bewildered and pondering exactly what it is you just watched. 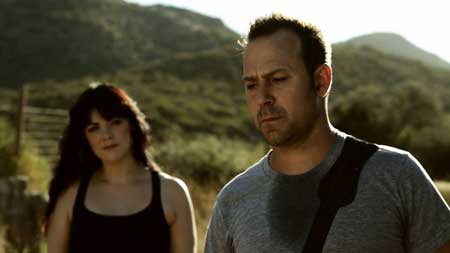 After The Hideout’s initial foreshadowing of the chaos to unravel, the film attempts to show viewers how the sudden zombie apocalypse developed…by showing, through blurred lens, barely decayed zombies running full speed and spontaneously crawling like a cat in heat. A low budget certainly affects the aesthetic of a movie. In this case, it worked to the detriment of the film. Zombies have barely any wounds; most just have a few blood stains slapped sloppily onto their faces. The image of the burning city straight up looks like a black box ripped from a cartoon and pasted into the scene using clip art or heavily pixelated PlayStation graphics. Syrup was obviously used to portray blood. But worse than its amazingly bad graphics, was its audio. 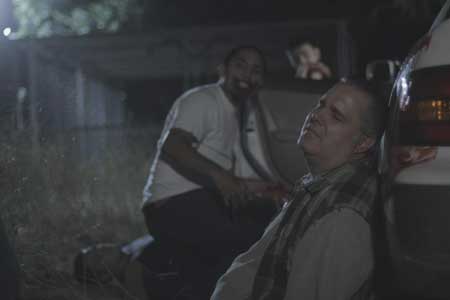 Not only did the music fail to correlate with the scenes, but also the microphones on the actors seemed to malfunction. At certain points, one can scarcely hear one or two actors included in a scene, yet others present seem louder and clearer. Generally, most of the characters sounded as if they had no microphone and were being filmed from afar with an inexpensive camcorder. Not even the actors’ desperate overacting could alleviate the confusion prevalent in the nonsensical plot. 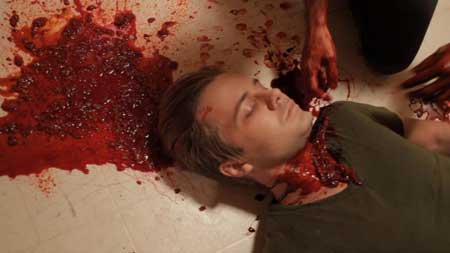 Almost every character, with the exception of stone-faced Cole, overacts in a manner reflective of a lousy high school production. They fail to even smoke a cigarette convincingly. Galaga-style black clouds of smoke do not help. And though the actor playing Cole didn’t have the problem of overacting, his acting issues definitively existed. Cole’s face—it never changes. Not once. With his unconvincing deliver¬y of his lines, singular expression, and monotone voice, Cole’s dullness and absurdity may outweigh the overall movie. One particular scene exemplifies all these heinous problems in one explosive moment of crappy directing. Shooting a rat on his team of misfit thieves, Cole experiences a minor meltdown—more akin to a tantrum than an actual meltdown. Charlie, played by an actress (if I must call her one), tries to comfort Cole, when suddenly, he freaks out and violently grabs her shoulders and screams, “I said I don’t want to talk about it!” Her eyes widen and pop with a comical and cartoonish intensity. Though in all probability not intended to elicit amusement, this incongruous moment offers a sweet morsel of humorous relief from its painstakingly boring progression into nowhere. When the actor playing Cole yells at “Charlie,” his voice doesn’t shift; like his facial expressions, it never changes. 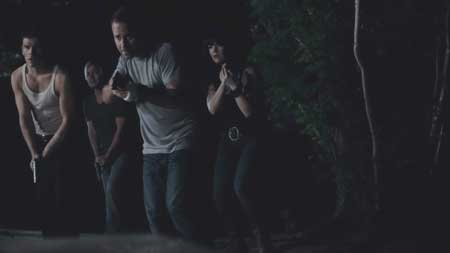 The most interesting part of the movie (which doesn’t say much), occurs early on when we meet mob boss “Hacksaw Henry” who emulates the love child of Mad TV’s Will Sass and James Gandolfini. As he heats a wire hanger with a lighter and threatens to jam it up the shaft of a bond and nameless victim, Cole waltzes in to bring the energy back to nonexistent. Perhaps if they had actually showed the mutilation, I would have had less difficulties remaining conscious for the viewing of this film.

When the ending credits roll and “Chaotic Productions” pops on the screen, a thought manifests…
Chaotically snooze-worthy. 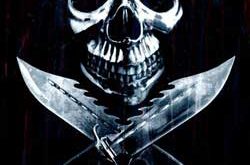