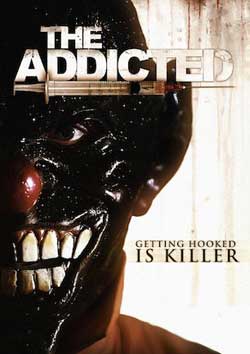 A reporter, in an effort to get the big story, ventures into an abandoned re-hab clinic with her friends. Rather than the big story, she finds a malicious ghost.

You wanna talk plot devices? How about a struggling journalist after a big story—one that may even turn her career around? How about several friends exploring an abandoned building . . . then getting hunted by a malevolent force?

With Sean J. Vincent’s new flick, THE ADDICTED, you get ‘em. It’s not the most original movie, but, it makes up for it with its style: flashlight-lit cinematography, a pissed-off ghoul mugging in a camera, a score full of haunting strings and minor chords, and absolutely no sunshine.

THE ADDICTED kicks things off with a few different story threads. At first they seem disparate, but, oh, they hang together . . . we later learn. You’ve got a few young folks wandering around a creepy old rehab clinic—abandoned, obviously. Things are going fine until they pull out the ouija board (isn’t that so often the case?). Then it isn’t long before they’re all being ripped to shreds by something . . . EVIL. A construction worker looking to do a little work in there, also, gets it by the same thing. Clearly, this old clinic is not a desirable place to be. 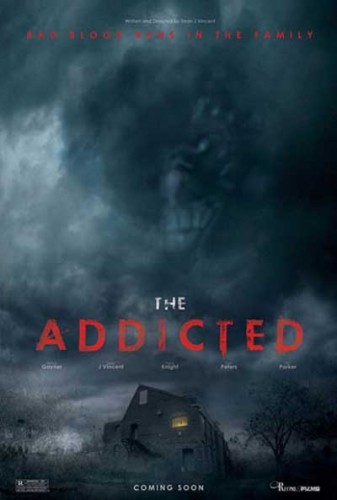 You will therefore be placing your palm over one or both eyes when Nicole Hunter (Jenny Gayner), a reporter, is talked into SPENDING THE NIGHT in that very building to get her big news story. I saw HELL NIGHT; I know how this goes down. Luckily, Nicole’s friends agree to spend the night in there with her . . . after a strangely out of place liquor-drinking/pot-smoking montage to the tune of a corny pop song.

Meanwhile, we’ve been getting flashbacks to this loser of a guy who can’t stop injecting heroin. To make matters worse, his stepfather is keeping him hooked . . . be-cause . . . because . . . uh . . . he’s not a very nice guy. So he hangs himself in the drug rehab clinic, and haunts it from beyond the grave. Where’d he get that clown mask, though? Scary. 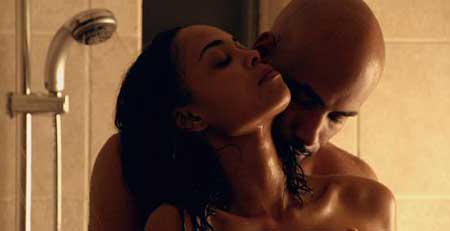 THE ADDICTED is, for the most part, a pretty entertaining horror flick. The ghost is creepy-looking in a cool way and has some unintentionally funny one-liners: “NO ONE EVAH LEAVES!” And when he says, “Sssssshhhhhhh,” to his victim, putting his finger up to his lips: agh!

We’ve watched attractive youngsters try and escape this situation a thousand times before and we liked it. Didn’t we? What’s one more time, really?

The problem with THE ADDICTION is its pacing. It peaks at maximum dark-ness/maximum action/maximum violence forty-five minutes in. There’s still forty-five minutes left when it ought to continue building. But it’s built. Buckle up, it’s about to stay the same dramatic level for the entire second half. That’s a tad exhausting–and boring. They could have thrown in some more intrigue, mystery, and a doomful sense of explo-ration, couldn’t they?

And a few plot elements are pretty weak-kneed. Really? That’s your big-break news story? The abandoned rehab clinic and its homicidal ghost? How do you even know there’s a story there . . . or a ghost? Because your boyfriend said so? Okay, okay. Fine.

The characters also don’t act too surprised or befuddled when they find out a former patient’s “ghost, or whatever” is offing their friends. I think that sort of thing would come as a shock: not only has someone you consider close been murdered, something has happened that–I don’t know–challenges ordinary suppositions about reality. No biggie. “Just a ghost, or whatever.”

If you like the same-ole-same-ole horror flick, there is no reason you wouldn’t enjoy watching THE ADDICTED. It has a great sense of style and genre conventions out the wazoo. But if you’re hoping for a radical new experience in the genre, well . . . ugh . . .