Arguably the best Italian slasher film not directed by Dario Argento is Michele Soavi’s stunning directorial debut Stagefright (1987).  A longtime favorite among horror fans of the giallo and slasher genres, Stagefright has never been accurately represented on home video, with the exception of the beautifully British DVD done in 2000 from the original camera negative.  All other pressings of this film have been from less-than-stellar elements.  All of that is about to change now that Blue Underground has announced the forthcoming release of the film on both DVD and Blu-ray on September 23, 2014. 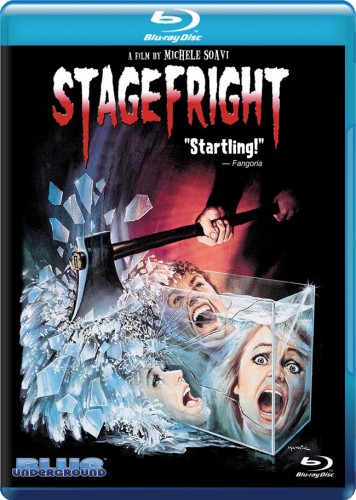 The Terrifying First Film from the Director of THE CHURCH and CEMETERY MAN While a group of young actors rehearse a new musical about a mass murderer, a notorious psychopath escapes from a nearby insane asylum. But when the show’s director locks his cast in the theater overnight, the madman is accidentally locked inside as well. Now, a killer with acting in his blood has gone berserk for the blood of actors (including several scenes that EuroHorror fans worldwide consider to be the most violent of the decade) and the stage is set for one unforgettable evening of shock, suspense and unstoppable carnage.

STAGEFRIGHT marked the stunning directorial debut of Dario Argento protege Michele Soavi and instantly sealed his reputation as the leader of Italian horror’s new generation of filmmakers. Also known as AQUARIUS, DELIRIA and BLOODY BIRD, this brutal shocker has been newly transferred in gore-drenched High Definition from the original uncut and uncensored negative and comes loaded with exclusive new extras!

Head Of The Company – Interview with Star David Brandon

The Sound Of Aquarius – Interview with Composer Simon Boswell