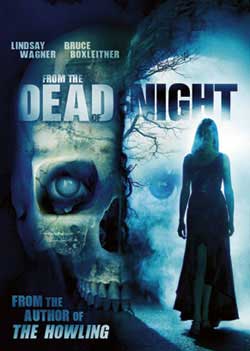 After having a near death experience Joanna finds her life in constant danger. She begins to believe that certain forces are trying to bring her back into the world of the dead. Her boyfriend Glen thinks she’s crazy so Joanna turns to her ex-boyfriend, Peter. It just so happens that Peter is a strong believer in the supernatural and even teaches a course on it at a local college. Together they must confront the “walkers” so that Joanna can live to see another day. (from IMDB.com)

Directed by: Paul Wendkos
Written by: William Bleich
Starring: Lindsay Wagner, Bruce Boxleitner, Robin Thomas, Robert Prosky,and Merritt Butrick
Escaping death is something one should never have to deal with, but when it happens, that narrow escape is something that one can never forget about. From religious theory to scientific fact there are many ideas about what happens when one dies, and life we lead after death. In Paul Wendkos’s “From the Dead of Night,” a young woman’s life is turned upside down when she has a near death experience that eventually catches up to her in learning that it is very difficult to escape death after a near miss the first time.

Joanna(Lindsay Wagner) is a middle-aged fashion designer with a wonderful, caring boyfriend Glen(Robin Thomas.) Even though Joanna and Glen seem happy in their relationship, Joanna refuses to accept Glen’s hand in marriage. Her life seems pretty normal, as her career and love life are very successful. The couple go to a c**ktail party, and end up running into one of Joanna’s exes, Peter(Bruce Boxleitner.) Tension is strong between Glen and Peter, as Joanna repeats that Peter left her during one of her most vulnerable times.

When Joanna goes outside to take a breather, she is frightened by a cat and falls into the pool. She hits her head on a flowery centerpiece in the pull, giving her a concussion. During her blackout, she envisions her soul leaving her body and floating to an orange spiral, being grabbed by black silhouettes of figures. When she awakens from her concussion, she tries to explain what she saw, but Glen does not believe in her vision. Joanna goes to Peter for answers, and since he is more in tune with spiritual happenings, he reads her Tarot cards, and gives an outcome with her being surrounded by death.

When Joanna and Glen take a vacation to Mexico to get away, things start to get strange when the dead start to come after her. Her life changes from what was normal to terrifying as the dead try to make sure Joanna doesn’t escape death a second time. Joanna must avoid the attempts to be killed, plus her own personal problems between her current boyfriend and her ex that still wants to be in her life.

“From the Dead of Night” is a powerful story about what happens when one escapes something they were not supposed to escape. The zombie-like corpses that chase after Joanna are referred to as “walkers,” and have only one mission: to kill Joanna. There is very few moments of violence, and the act is off screen and hidden. However, scenes of dramatic car chases and fights give the movie some action to add to the paranormal aspect of the film. Even though this was a “made for TV” film, there are plenty scenes depicting passionate moments and scenes of dramatic kills making the movie a bit too edgy for TV. The length of the movie was a strenuous 192 minutes, which was a bit lengthy for my interest, and was one of the only things that bothered me about the film.

Paul Wendkos’s “From the Dead of Night” is a dramatic film that explores possibilities of what happens when one cheats death, and the struggle one must uphold to stay alive when death surrounds them. Even though the length of the film seemed daunting, the story keeps adding action that keeps the viewer from giving up on the film.

Tags From the Dead of Night