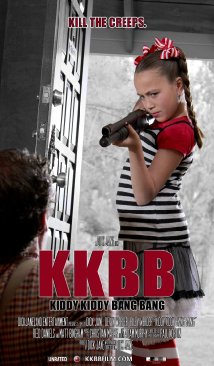 Killer twin sisters wage war on a monster who just attacked their friend.

This short film could easily have been directed by Quentin Tarantino, what with its unusually violent protagonists and lashings of blood – and this is definitely a compliment! It was a light-hearted take on the concept of revenge, contrasting greatly with the popular rape-revenge films of the 1970s (such as I Spit On Your Grave and The Last House on the Left). I would instead draw similarities with the girls from Kiddy Kiddy Bang Bang and ‘Hitgirl’ (played by Chloe Grace Moretz) from the recent Kick Ass franchise. Both of them fly in the face of the ‘usual’ portrayal of little girls, and create memorable film characters.

The plotline to Kiddy Kiddy Bang Bang (a title which I feel must have been inspired in some way by the classic musical, Chitty Chitty Bang Bang – which did also feature a ‘child-catcher’) is beautifully simple. For this reason, it is easy for viewers to enjoy watching. And the fact that 99% of the population agree with the concept of paedophiles being utterly despicable probably doesn’t hurt either. Basically, Polly and Sam are 9 year old twins who decide to get revenge on a local pervert who had ‘assaulted’ their friend. Despite looking incredibly sweet and innocent, the twins’ language and behaviour quickly establish that they mean business – especially as they’re also angry with the police for not stopping this sort of thing from happening. Armed with several guns, the twins knock on the pervert’s front door and he can barely contain his delight at the sight of the adorable two. Pretty much everything about this film is supposed to be comedic and this means that we applaud the twins’ violent behaviour, almost as if it has come straight from a comic book.

What I loved most about the short film Kiddy Kiddy Bang Bang, was that director, Dick Jane, has managed to insert some black humour into what could be a very bleak and terrible subject matter (think about how intense and dark Hard Candy was, or even David Schwimmer’s Trust – films that explored very similar themes). This tongue-in-cheek approach works well to highlight the issue at hand – that is, paedophiles are vile creatures – whilst remaining entertaining to watch and not getting too ‘heavy’ with it. Therefore the film feels fresh and original, whilst still having an underlying message. It also reminds me of a recent (2011) feature film called ‘God Bless America’, in which a middle aged man and a teenage girl go on a killing spree, basically shooting anyone who annoys them. This is one that also combined political satire with black comedy, so if you liked Kiddy Kiddy Bang Bang, certainly give this one a watch too.

And the other good news is the fact that the words ‘To Be Continued…’ feature after the film has ended, so expect more to come! I would recommend this little film to anyone who likes a nice combination of bad ass little girls, violence and humour. It is definitely an entertaining piece, if nothing else! 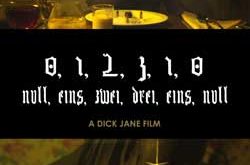