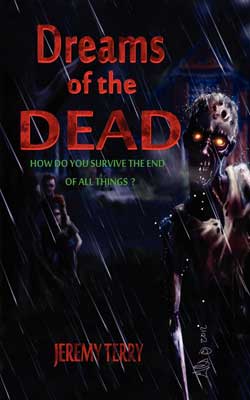 We all love zombies. We all subconsciously want to live long enough to see the apocalypse rising, so that we can get in touch with our own heroic self hidden somewhere deep inside our hearts and minds. It’s every boy’s dream and every girl’s horrible nightmare. Or so Jeremy Terry leads us to believe. Introducing a palette of characters entwined together with invisible strings of destiny, which mostly die a gruesome death as the story goes on, he walks us through this interesting representation of a world slowly shattering to pieces. Leaving clues to his main characters, in that way building the plot, he is creating a puzzle whose parts they need to arrange and, at times, rearrange in order to survive.

The story is not your typical zombie apocalypse story, although one might think that in the beginning. It is full of monsters, yes, ranging from zombies, vampires, to humans who let their inner monstrosity out in a new world without morality or rules, the world of utmost chaos. Terry builds the story around a failed government experiment, secretly performed in the underground depths of a deserted house used for cover in a no man’s land. Research phase evolved around experimenting on military men who were strong enough to endure the whole process. In this turmoil, they became vampire-like monstrous creatures set to unleash ultimate biblical evil upon the unsuspecting world. The writer didn’t ignore the human side of the beast, describing a moment of its own survival and how it feels in the newly created nightmare, the remains of its humanity lost in the cruel experiment performed by his fellow men.

He is successfully creating suspense and chill with descriptions of peril situations in which his characters have no other option but to survive. Using the already known facts about monstrous beings from classics and popular culture in order to bring his vision of the apocalyptic world closer to the public, and flirting with religious notions, Jeremy Terry builds a story whose complexity revolves around survival of the fittest and a fantastical twist at the end of the story. Hopelessness hanging above the heads of a small group of teenagers, Jeremy, his twin brother Matt and their high school friends the whole time they are on a quest to look for their parents, or any help from adults for that matter, pulls the reader deeper into their nightmarish reality, facing a direct confrontation with their worst nightmares, creatures emerged from the very depths of hell and human malice, forced to grow up rapidly in the process. They have to cope with the loss of their friends, their families and their life. The shift from a happy and blissful childhood to a brutal and unexpected adulthood forces them to find out what their deepest fears are, and how to deal with them in the end, realizing the value of love and family and friends in the process.

All this sense of powerlessness and lack of hope in the future of any kind, takes hold of the readers and leads them to an exquisitely formed ending which gives this novel a high five in my book. Interestingly written, with skillful and rich descriptions of impossible and almost endless situations spiced up with good humor is a recommendation enough to give you a night or two off, in the company of this fun and chilling piece of zombie literature.

Available in Kindle edition on Amazon