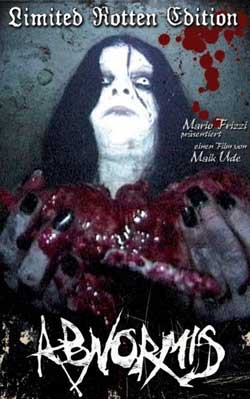 (Reviewer’s Note: Abnormis is a German film with no subtitles, so all of the dialogue is lost to this non-German speaking guy. But we’ve been down this road before, and we’ve triumphed, haven’t we?)

Walking into this viewing of Abnormis, we already know that there will be splatters of blood and gore around every corner. How do we know this, you ask? Because it’s German, directed by Maik Ude (his newest film, his previous two being Tuberkulose and The Butcher III – Zombies im Blutrausch), and if there’s anything we’ve learned out about German horror movies by now, it’s that they aren’t stingy when it comes to splashing the red stuff all around. What’s different about this one is that the director seemed to change his mind about his plot mid-story, and so our so-called “torture p*rn” film makes a sharp left turn around the middle and starts treading into “J-horror” territory. 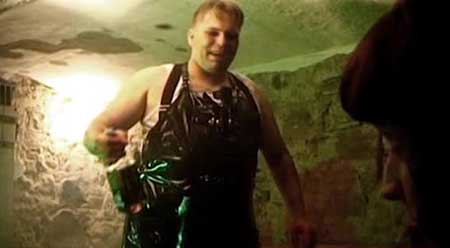 There’s little worse than getting cheated on, but that is presumably what is going on when a very pregnant Eva finds her Chris (boyfriend or husband, I’m not sure) eating ice cream and giggling with their mutual friend Kathrin at the mall. He tries to follow her, no doubt to try and weasel his way out of the trouble he’s in, but she drives away. I said there is “little” worse than getting cheated on, so what constitutes the “little?” Getting kidnapped by a huge dude carrying a sledgehammer definitely falls into that category. So does being tied up in a basement and tortured. It’s safe to say that Eva is having a really, REALLY bad day. 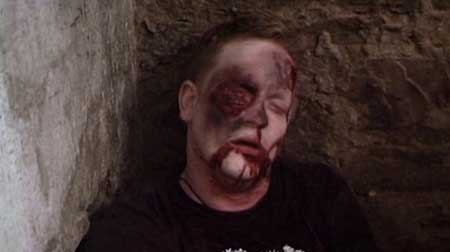 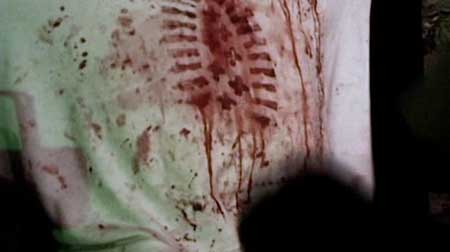 Still trying to plead his case, Chris followed Eva in his car, but finds her car abandoned on the side of the road. He approaches a nearby house, but is told by a huge dude with blood all over his hands that she’s not there. When he decides to peak in the windows rather than leave, he is knocked out and also tied up in the basement, alongside Eva. Then the torture begins. Chris is forced to sit in a chair covered in nails. Eva is bound with barbed wire. The big dude slices off some flesh here and there, he nails Chris’ hand to a table, then pulls it up and pushes his fingers into a meat grinder, later using that meat in a stew that he forces Eva to eat. But it’s not just the estranged couple that is tortured. It is also the viewer, as the extremely shaky camera work makes us feel sicker than the gore does. And this isn’t even a found footage film! 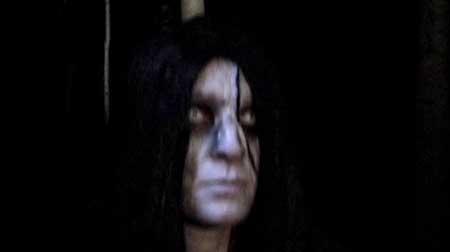 As I mentioned before, the first half of Abnormis is pretty much your run-of-the-mill, Hostel-style (or maybe Dard Divorce is the more relevant analogy here) torture film. But let’s not forget, we were introduced to a third character at the beginning of the movie, one who is not currently being tortured in a basement. While babies are being kicked out (for real) and scalps are being torn off, Kathrin, the third wheel of the group, is sitting at home crying, wondering why she can’t reach Chris on the phone. When she throws garbage on the ground, then has second thoughts about littering and happens to find a private investigators business card, she decides maybe that’s the way to go. When she gets a cut-off phone call from a suffering Chris, she springs into action. And this is where everything gets a little weird.

The big guy kills Eva when she tries to escape. She becomes a ghost (?) that looks like a member of the black metal band Mayhem. Meanwhile, Kathrin meets a P.I. with a drinking problem, and on their way to try and find Chris they get car-jacked by two guys with guns (I don’t know who they are supposed to be, but they end up very adequate victims of the demon/ghost/spirit thing). While the ghost aspect of the film is interesting, and I certainly don’t mind the change up from scene after scene of creative torture, it kind of comes out of nowhere and might not be appreciated by others who are expecting a straight forward horror movie. It kind of seems like a trick that would be thrown into a Part 3 sequel or something. 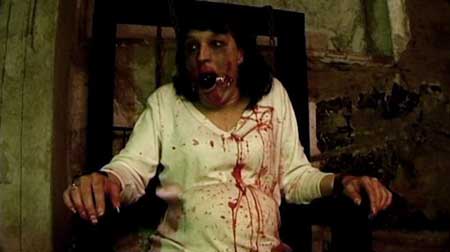 Abnormis is full of blood and gore, some of it over the top, some of it unnecessary other than to show the creativity of the effects crew, so director Ude certainly gets two thumbs up there. It also seems to have a lot of filler in it, some extra stuff that happens without explanation that could just as easily have been cut in order to make the movie a bit stronger (and shorter). For example, the hulking monster dude uses a straight razor to slice into Eva’s leg. Then he uses a bigger saw to cut off a chunk of her flesh. Then he bandages her back up. Why? Why bandage her back up if he’s torturing her and trying to make her suffer? There are a lot of these kinds of questions (why the ghost? is the killer a demon? who are these two dudes with guns? etc…) throughout, some of which may be solved if you understand German. But overall, even without answers, Abnormis is still quite a bit of fun and worth a viewing.