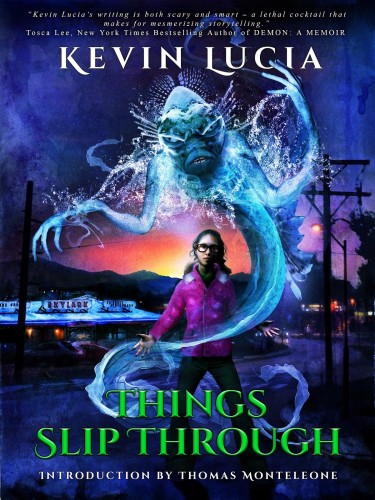 Gary Braunbeck, in the intro to Fran Friel’s frankly ass kicking collection Mama’s Boy, mentions how Peter Straub changed the expectations of a collection. No longer can an author get away with something as mundane as what often amounts to a “best of” grouping of unconnected short stories. They have to have some sort of through line, some thematic connection. With Things Slip Through, Kevin Lucia has taken that idea to its next logical step, compiling his short fiction in a way that tells a larger tale through them. It’s a heck of an endeavor that grabbed my attention immediately.

The first tale of the bunch, “Lament”, was by far the most effective and affecting one presented and does a heck of a job of kicking the door off its hinges. Nominally, it’s a story of repressed anger, violent revenge and racism in the wake of national horror. Nominally. But, under the surface lurks a far more crushing chronicle of the dangers of inaction and the guilt that accompanies it. There is no doubt that Kevin is out for blood and hearts with this one.

Then we’ve got “The Water God of Clarke Street”, wherein an intrepid and witty young girl turns the tables on an elder bastard in a way that slyly plays with the development of abusive and exploitative relationships teen girls sometimes find themselves in. And there is “The Gate and the Way”, a nifty cycle paying homage to ye olde Yog Sothoth and the terrors of watching family turn into something we no longer recognize. Ooh-ooh aaaannd “A Brother’s Keeper”, where selfishness is repaid in kind. But we can’t forget “Mr. Nobody,” where a young boy’s salvation comes from an unlikely source.

These show Lucia at his best. When his voice is warm and inviting, like chatting it up with an old codger at the local hole in the wall bar. When his Serling-esque sense of situational irony plays out as smooth as butter. When his characters jump, living and breathing, from the page. Good Old awesomesauce on a twelve grain bun.

But there are some problems. The wraparound narrative, ambitious as it is, starts off a bit awkward and contrived, making it harder for me to invest in those characters. Also, the journey of our intrepid Sherriff does not seem to end with much of a point. Perhaps it is intended to be a journey of finding purpose, but the value of the purpose is not particularly clear (as compared to the interior narratives of Gavin’s similar journey). Also, it seems like some of the stories are altered to fit this overall narrative, in a way that does not fit the story itself well.

Then there are some of the stories that don’t stand up to the standard set by those listed earlier. For instance, “Bassler Road” comes across as a pretty standard Carnival of Souls type of storywhere the point seems to be redemption, but the only temptation in the opposite direction is an obviously foul demon. The conflict there just felt limp to me. “On a Midnight Black Chessie” was an overall good story, but the beginning, which seemed like it was supposed to tie into the end, didn’t quite fit with the later portion. That created some dissonance that was tough to get past. Same goes with the Deus Ex Machina in “The Monster.”

So, yeah, there are some issues that I think could have been smoothed out and some stories that I didn’t entirely believe needed to be here. However, the collection overall entertained me and had a couple stories that absolutely wrecked me. I can’t give you a higher recommendation than that.