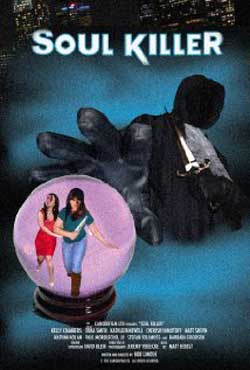 A masked killer is going around killing off people in Los Angeles, but the thing is no one can see him other than hard-working and under appreciated Natalie. Is she cracking up or is he real, and if so who is he and where did he come from. Natalie must find the answers to all these questions and figure out a way to stop him (if he does actually exist) before she becomes his next victim.

I think that the biggest issue that the horror genre is facing right now is an overall lack of originality (which is why there are so many pointless remakes flooding the market right now). I enjoy writing horror screenplays, short stories, and novels, and I’ll admit that sometime it is damn tough to come up with an idea that hasn’t been done before (thankfully I have a pretty powerful imagination though that helps me come up with new storylines). I watch a lot of horror films (actually that is pretty much all I watch) and think that the biggest majority of the ones that I have seen recently had a cookie cutter, been there, done that feel to them so I went into Soul Killer expecting more of the same. Thankfully I was wrong though and to my delight I found it to be not only different and creative, but just a pretty damn good movie in general. 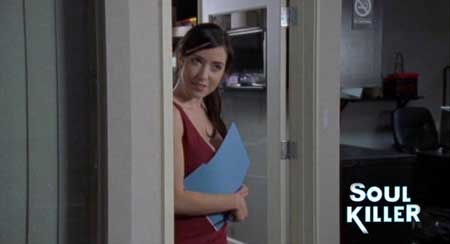 Without giving too much away let me just say that I loved the premise. I thought that the idea of having only Natalie see the killer was pretty slick and the person’s reason for committing the murders was well-thought out and pretty original. Writer Bob Canode (who also helmed the film) was thinking outside of the box while he was scripting this one and I’ve got to give it to him for trying something a little different from the usual. The premise works and I had a great time trying to figure out just what the hell was happening before the movie gave me the answers.

I also liked the fact that the movie has a message behind it and teaches the viewer a lesson of sorts. As I said earlier, I don’t want to spoil anything for the people who haven’t seen it but let’s just say that the people that are being murdered in the film are being targeted and killed for a particular reason. At first it appears as though the killer is picking his victims at random but Natalie (and the rest of us) eventually finds out that these people are all guilty of doing something that the shouldn’t have done and that there is a price for their actions (unfortunately she doesn’t discover this until she finds herself in the killer’s crosshairs after committing an act that doomed all of those before her). Essentially the film has a moral to it, and I thought that this was a very nice touch. 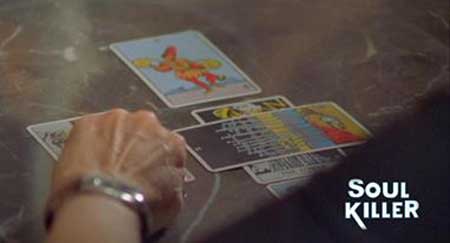 I really dug the main character of Natalie (played by Kelly Chambers) as I thought that she was likeable and realistic. She is one of those characters that works her ass off at her job but never gets any recognition for it and you can’t help but feel for her. If you’ve ever been passed over for a promotion that you really wanted and deserved because it went to someone else because he or she sucked up to the boss then you will no doubt be able to relate to this character. I’ve been in her shoes a number of times myself and I could really feel her anger and frustration due to the fact that a lot of people step on her and walk all over her simply because she is a nice person. There comes a point where she decides that she’s had enough and does something about it, and I felt the need to root for her as a result (of course her actions is what attracts the attention of the killer and ultimately puts her in danger but I still couldn’t help but cheer for her as I was sick of watching everyone take advantage of her and treat her like garbage). 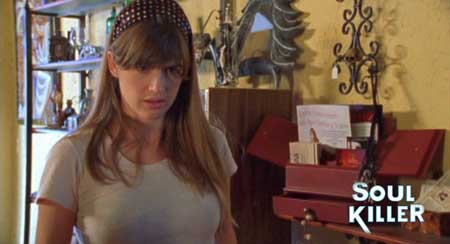 There were many things that I really enjoyed about Soul Killer. I thought that it was an interesting and entertaining movie and even though it starts out a little slow for my taste things do pick up at a certain point and it held my complete and total attention from there on out. Some people may complain about some of the acting (and rightfully so as there is a couple of instances where it is laughably bad) but I was able to overlook it. If you are in the mood for something a little different that successfully combines the elements of a slasher flick with a supernatural thriller while throwing in a moral lesson at the same time then do yourself a favor and check this movie out.