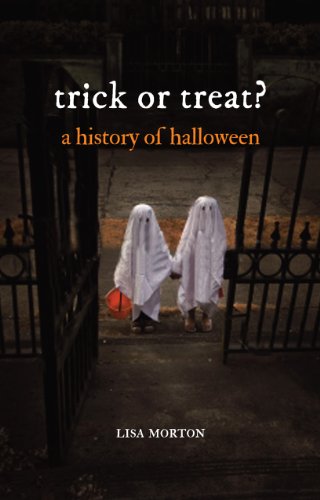 Author Lisa Morton has a career that most of us horror fans would love to have.  She is an award-winning writer who is rightly considered to be one of the world’s leading authorities on the yearly holiday of Halloween. Her books include 2003’s The Halloween Encyclopedia and 2008’s A Halloween Anthology: Literary and Historical Writings Over the Centuries which received the Bram Stoker Award for Superior Achievement.  Her latest book, 2012’s Trick or Treat: A History of Halloween, received accolades for its in-depth research and explanations about the history of one of the world’s favorite holidays.

Illustrated with over 50 photos (two-thirds of which are in color), this 229-page book covers everything that you could possibly want to know about what is arguably the second most lucrative holiday in the United States, second only to Christmas.

From the inside dust jacket of the book:

Halloween has spread around the world, yet its associations with death and the super­natural as well as its inevitable commercialization has made it one of our most puzzling holidays. How did it become what it is today?

Trick or Treat is the first book to both examine the origins and history of Halloween and explore in depth its current global popularity. Lisa Morton reveals how holidays like the Celtic Samhain and Catholic All Souls’ Day have blended to produce the modern Halloween, and she shows how the holiday has been reborn in America, where costumes and trick-or-treat rituals are new customs. Morton takes into account the influence of related but independent holidays, especially Mexico’s Day of the Dead, as well as the explosion in popularity of haunted attractions and the impact of events such as 9/11 and the global economic recession. Trick or Treat also examines the effect Halloween has had on popular culture through literary works by Washington Irving and Ray Bradbury, films such as John Carpenter’s Halloween and Tim Burton’s The Nightmare Before Christmas and television series, including Buffy the Vampire Slayer and The Simpsons.

Trick or Treat takes us on a journey from the spectacular to the macabre, making it a must for anyone who wants to peep behind the mask to see the real past and present of this ever more popular holiday.

Click here to order from Amazon.com in hardcover, paperback, or for the Kindle.