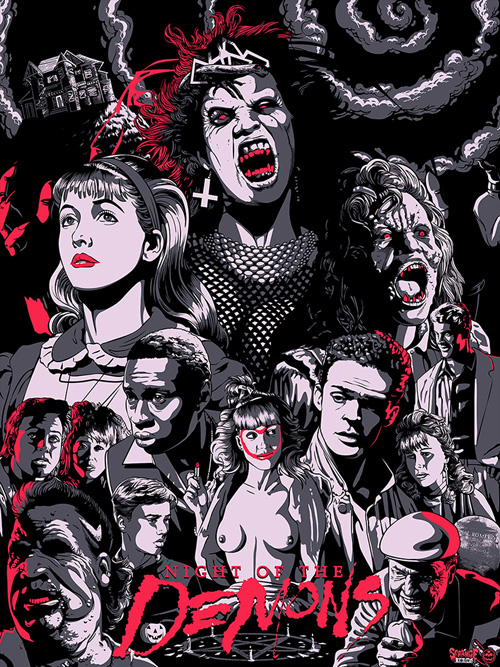 Today marks the 25th anniversary of the release of Kevin Tenney’s cult classic, Night of the Demons. To commemorate the anniversary, the folks over at Strange Kids Club have released an awesome screenprinted poster featuring the film’s cast. There are only 50 of these bad boys available.

Strange Kids Club is having a party. You’ll have a hell of a time!

Pop culture blog/art shop Strange Kids Club is celebrating the 25th anniversary of Night of the Demons with an exclusive screenprint. It is available for purchase now right here.

The screenprint commemorates the 25th anniversary of Kevin Tenney’s Night of the Demons, which was released on October 14, 1988. Limited to only 50 pieces, the poster measures 18×24 and features a hidden glow-in-the-dark layer. Each one is printed on 100lb French Poptone Grapesicle stock by Danny “ohdanielsan” Askar. They cost $40.

Strange Kids Club teamed up with artist Matthew Skiff for the design, which depicts the entire horrifying cast of the cult classic. “I could go on forever as to why I love Night of the Demons so much,” explains Skiff, “But it boils down to it having the perfect balance of scary and goofy, and it’s the perfect Halloween movie. I wanted to capture as many characters as I could that made the movie so perfect, as well as the notorious ‘lipstick scene’ that you just have to see to believe.”

This isn’t the only treat Strange Kids Club has in store this Halloween season. Earlier this month, the website released a Belial (from Basket Case) monster pillow, which sold out in 15 minutes, as well as Series 1 of their Circle Jerks stickers. October 24th will bring an 18×24 digital print for Stephen King and George A. Romero’s Creepshow.