Fifteen years after an on campus murder, students re-open the case for a class and uncover a truth more horrifying and closer to home than they ever imagined.

Murder mysteries are something of a hard sell.  These days, the standard “Whodunnit?” template is rarely utilized as more than a springboard for creative invention.  Both 2000’s “Memento” and “Brick” from 2005 are brilliant examples of where a mystery can artistically take us.  They also happen to be two films director Lance McDaniel and his co-writer Sean Lynch should have given a gander before concocting the truly awful “Unsolved.”

Displaying the visual and storytelling finesse of a bull driving a Sherman Tank through a china shop, our latest offering spins a web of tedious homicides and wall-to-wall cutesy, awkward dialogue that wouldn’t have made it past the table reading stage in a “Saved By the Bell” teleplay.  I’m trying to avoid a comparison to Lifetime movies here, because that would be an insult to Lifetime movies.  Last year’s “Playdate,” one of the network’s dubious thrillers, is freaking “Rear Window” compared to this mess.

A product of Oklahoma City University (not a good sign) and produced by original “Children of the Corn” director Fritz Kiersch (an even worse sign), “Unsolved” begins fifteen years ago, as college student Heather (Ashley Grinols) flees an attempted rape by two men in a campus library.  On the hasty stroll back to her dorm, she comes upon her boyfriend Michael (Jerome Braggs, actually quite good in moments) as he and his friends are shooting a game of craps in the middle of the sidewalk.  Within three minutes, “Unsolved” had me laughing at its ineptitude.  Did the writers honestly have no better business for the black dude than gambling on dice?  Racial insensitivity aside, Michael and Heather argue before she storms off, never once mentioning the recent near-assault.  As she reaches the dorm entrance, an unseen figure grabs her from behind and cuts her throat, leaving her to bleed out.  Though rather silly (Dice?  Really?), the opening does move at a decent clip and command one’s interest.

After a credit sequence featuring an inappropriate and obnoxious rap song that had me rolling on the floor once again, we are introduced to the protagonist, Amanda.  A criminology student at the same college, she and beau Nick (Josh Shideler) are partnered together to investigate an unsolved crime case of their choosing as a class project.  Though serviceable in the lead as Amanda, Jane Bunting struggles visibly with the script’s clumsier exchanges, which unfortunately is damn near all of them.  Shideler grins his way through the entire role of Nick, leading me to wonder if he was humiliated by some of the lines he was forced to utter, or just mildly retarded.  I’m guessing a little of both.  Either way, it’s an impossibility not to pray that he becomes a victim once the killer resurfaces and corpses begin piling up.

Amanda and Nick, with help from pal Shane (Quinn Gasaway, who dials up the Gay Meter to a level of full-on caricature), decide on the previously depicted murder for their unsolved case.  This is much to the chagrin of both Professor Somers (Lance Marsh), who assigned the project, and Amanda’s adoptive father (Arthur Scappaticci), the dean of the school.  When forbidden to pursue the case any further, she senses a conspiracy and decides to continue her investigation secretly, taking on a sexual harassment case as a smokescreen for her real pursuit. In a turn of highly unlikely synchronicity, the second case happens to be from the very same period as Heather’s murder, involving a janitor who might have seen something that fateful night.  Coincidence?  Nothing is a coincidence in a woefully written thriller, friends. 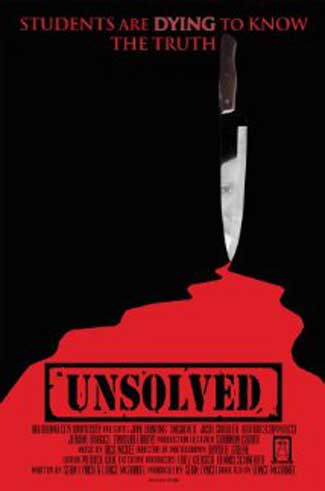 Her sleuthing leads our twenty-something Nancy Drew to Michael, who was arrested for Heather’s death and quickly released due to lack of evidence.  The scenes between Bunting and Braggs are the film’s best, and both performers have a chemistry not visible in any other relationship entailed within the production. If Michael had been brought in earlier to assist in the detective work instead of Perma-Grin and Homo Cliché, “Unsolved” could have found a more stable footing and perhaps kept me off suicide watch once it was over.

As Amanda closes in on discovering the killer’s identity, those around her begin dying at the hands of the presumably out-of-retirement murderer in much the same fashion as Heather those years prior.  I’ll reveal no more (Can we just call that a given in my reviews?  I’m sick of typing it.) should you find yourself in the unfortunate position of watching “Unsolved,” but I will declare that if you didn’t see the twist coming from three states away, you were either unconscious or focused too intently on your Words With Friends match during the first hour of runtime.

Though no one is walking home with any awards here, the performances are uniformly decent.  Of course, that statement doesn’t encompass the two roles I’ve already made crystal clear that I hated, and Tinasha LaRaye as best buddy Jasmine seems to serve no purpose than to be blandly sassy and prove beyond a doubt that Oklahoma does indeed have African American citizens.  I’m still a bit skeptical about that, though.  McDaniel’s direction is by-the-numbers stuff, bringing nothing new or original to the table save a perverse affection for terrible hip-hop.  The death scenes are mild at best, never once upping the ante or even attempting a modicum of variety from one to the next.

I can see no rational reason to recommend this, only hundreds of justifications for avoiding it at all costs.  It’s almost cruelty to tear apart a movie like “Unsolved” and those involved, as it feels akin to kickboxing with a five year-old girl to yours truly.  However, in my defense friends, they started it.