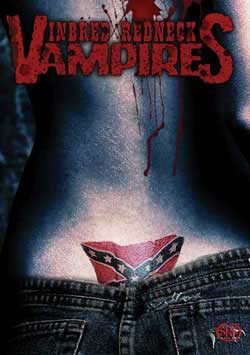 A vampire chick and her incompetent lackey end up in a small town full of an assortment of rednecks, white trash, and just back woods idiots in general. It isn’t long before the town’s residents are being turned into bloodsucking vampires and all sorts of goofiness ensue.

In my opinion it is extremely rare to find a good horror/comedy film. I think that the biggest majority of them are pretty lousy (such as the crappy “Scary Movie” series, how and why are these still being made?) and are basically just a waste of time. Every once in a while you’ll run across a good one (Twisted Spine’s “Deep Dark Woods” or any Speed Freak films as well as most Troma movies just to name a handful), but unfortunately “Inbred Redneck Vampires” is not one of those films that I would place in the “good” category. I found it to be painfully bad and there was really nothing funny (or entertaining, for that matter) about it.

“Inbred Vampire Rednecks (aka Bloodsucking Redneck Vampires)” is one of those movies where the filmmakers just try way too hard to be funny but never quite succeed and instead come off just being silly (and not in a good way). I knew about five minutes into it that I wasn’t going to be a fan of this film and I was correct. It seemed to get more and more ridiculous as it went on and there where many moments where I came close to just turning it off before it was over but somehow I managed to actually make it all the way to the end. I have serious doubts that most viewers will be able to accomplish the same feat.

Why was it so bad? Well, for starters it was just way too silly. I know it was supposed to be wacky and zany but instead I found it to just be obnoxious. Instead of making me laugh it just got on my nerves for pretty much the entire time I was watching it. It isn’t funny and I think that the people behind this film were well aware of this fact too (I really don’t see how they couldn’t be). In the film’s desperate attempt to be funny we are treated to several fart jokes (which go on way too long), people with silly names, a wacky gay character, and the usual bunch of stereotypical backwoods rednecks. It was like the filmmakers went out of their way to be unoriginal in terms of comedy and I am surprised there wasn’t a slew of knock knock jokes thrown in somewhere to be honest.

The film can also boast some of the worst (and most annoying) characters ever put on film. The Poissier family (get it? It’s like Pisser! Groan!) is just your typical bunch of rednecks who go about doing your typical redneck things (such as drinking beer, wearing overalls, etc). I found the mother to be the worst one and every moment she was onscreen (which was a lot) I wanted to scream. The interior decorator character was also unlikable and his annoying fake accent got old around the third time he opened his mouth. The entire cast is pretty bad and pretty much the only one I came close to liking was the foul-mouthed, hard-drinking midget. He is the only character that is remotely humorous and for some reason he isn’t used as nearly as much as he should have been.

“Inbred Vampire Rednecks” was just not for me. Watching it wasn’t what I would call an enjoyable experience and I doubt that I will be watching it again anytime soon. I thought that it was quite bad and there is not a lot of positive things I can say about it. I have trouble suggesting anyone run out and grab a copy of it unless you are just a fan of bad movies. Not since “Ankle Biters” have I seen such a bad vampire movie. 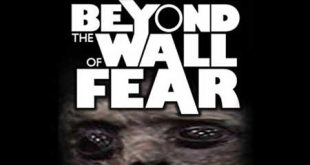