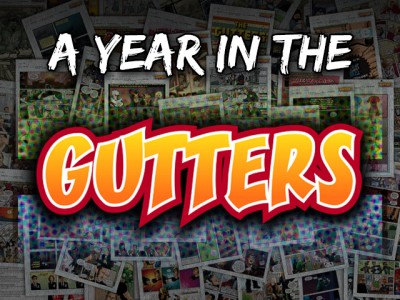 Though all this, we the Comics Fans have cried out “Why? …Why so serious!?!”

It is time for someone to put a stop to this. Or at the very least, point out how silly it is. It’s time for a hero… to Rise.

That hero is Gutters.

Gutters has been a comedy staple since its release in 2009. It has featured over 300 artists, including living legends Neal Adams and Nick Cardy, as well as guest writers including Gail Simone and Mark Waid. Unfortunately, all that awesome has finally taken its toll and Gutters finds itself in financial trouble.

What started with a frank discussion with fans on Facebook, ended with a Kickstarter launch. Gutters is asking for a mere $15,000 to keep the strip updated once a week for a year. There are stretch goals that could see the strip going to 2 or 3 times a week.

Backer levels range from signed books to guest appearances in strips and original art. There is even a Corporate Sponsorship Level that Marvel and DC are sure to jump on. You hear that BOOM and IDW? Don’t let them beat you to it!

(Chances are though; it’s totally the comic it needs too)

For more information on our current Kickstarter please visit our page