When a jury fails to convict the serial killer who savagely murdered his family, one man must rise above his desire for revenge and descend into the deranged world of a sadistic predator to uncover the truth and finally get justice. What begins as a classic revenge tale takes a dramatic turn into a haunting land of horror and murder.

I’m not really sure what I was expecting when I sat down to watch Tunnel Vision. At first, I was thinking maybe I’d like to see it be a twist on the slasher film. Then I was kind of hoping it would move into being a violent revenge drama. What it ends up being is neither of those and is far more in line with a slow moving drama that never really satisfies. That’s not to say it was bad, it was just underwhelming I suppose. First time director, Delila Vallot, pretty much just gives the audience a ‘how do we catch the killer’ film that never does anything surprising. The lead of the film, a man called Cristos, is without question a very unique lead.

Gabriel Alera (Cristos) is a man who is out to prove to the world that he is a better man. Having had a rough life, he spent time in prison on a manslaughter charge, even though the incident was in self-defense. Those days are long over for him. He has opened his own motorcycle shop, has a beautiful wife, Cathy (Leslie Mills), a terrific son, Kevin (Michael Steiger), and best friend Lance (Courtney Ray Geigle) always has his back. One night when Gabriel comes home from work, he finds his wife and son dead. The assailant however has not left the house and viciously attacks him. He’s left for dead and is unconscious for several days. When he comes to, he finds that his whole world has been torn away from him. To the authorities, his past is questionable and his injuries have caused him to have trouble with his memory. While at the store, Gabriel sees a man that he knows to be the killer but the evidence just doesn’t add up. He has no one to turn to except for Detective Cynthia Grier (Ion Overman). She believes in Gabriel when no one else does and together they’re willing to cross the line to catch the killer. 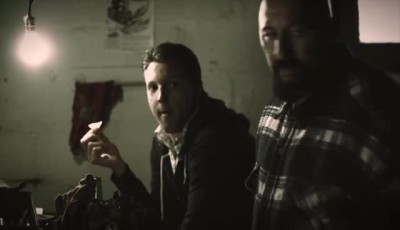 Tunnel Vision never felt like it was willing to take any risks. It moves from point A to point B without any real surprises. Everything that happens, we expect to happen which sort of leaves you a bit disappointed. For me, I had trouble connecting to the story and how it was presented. It’s a well-made thriller that’s pieced together in a way that keeps the proceedings moving at a brisk pace which makes viewing easy.

The acting in the film is rather stand-out. Cristos (Desperado) has appeared in many films and is a seriously excellent lead. He doesn’t have your typical leading man looks which gives the film a bit of a different vibe. The man is covered in tattoos and looks like a beast. Here he plays the sympathetic family man with a dark past. Equally as impressive is Ion Overman as the detective that risks her job for a man she hardly knows. The two of them have a chemistry that really works on the screen. The killer, played by Scott Haze, portrays the character with a sly intelligence and a dark streak that he’s able to hide with ease. The script was written by Cristos and writing partner Scott Barry. They keep the events pretty grounded in reality but the payoff was seriously lacking. 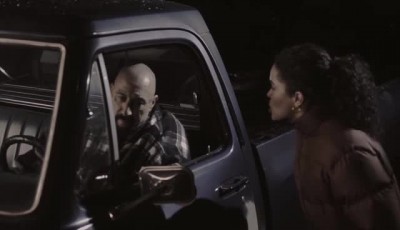 For what it is, Tunnel Vision is decent entertainment and you could do a whole lot worse. If you go into the film with low expectations, you may find this to be a decent thriller. The cast and crew have fashioned a film that shows you how talented of a group they are. As for me, I was expecting a payoff that would have been more ramped up and in your face than what was delivered. I will reluctantly recommend Tunnel Vision, but don’t expect too much. Aside from some solid performances, it doesn’t offer much else. ** (out of 5)