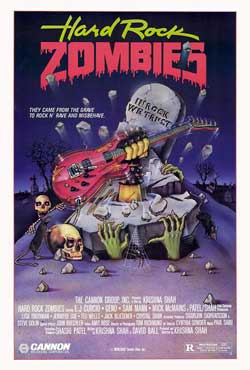 A hard rock band travels to the tiny and remote town of Grand Guignol to perform. Peopled by hicks, rubes, werewolves, murderous dwarves, sex perverts, and Hitler, the town is a strange place but that doesn’t stop the band’s lead singer from falling in love with a local girl named Cassie. After Nazi sex perverts kill the band to satisfy their lusts, Cassie calls the rockers back from the grave to save her, the town, and maybe the world

Let’s pretend, for just a moment, that Hard Rock Zombies was a definitive moment in horror history. Let’s pretend that the film isn’t popular today because it was just misunderstood, that the philosophies that it expounds upon are so avant garde and political that there were people who just weren’t ready to accept it back in the ‘80s. The focus on Hitler and Nazism and zombies attracted to loud music is a statement, isn’t it, about government interference of free speech and the Satanic connotations of heavy metal? 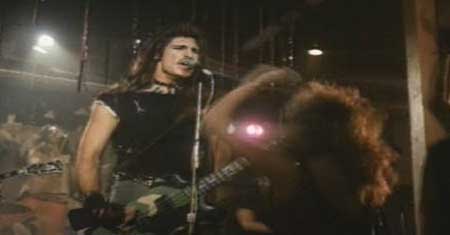 In reality, probably not. Hard Rock Zombies doesn’t seem like it has a whole lot going on in its brain, as the zombies in the film can attest – they’re “allergic” to brains or something like that. Instead, the film’s really about how much tight spandex and hairspray a film can pack into a 90-minute running time, and how long viewers will sit through entire songs of repetitious rock ballads. I can tell you that, if I didn’t have to review Hard Rock Zombies, I would have shut it off long before the zombie lead singer belts out a love song for his living mistress Cassie.

That’s because Hard Rock Zombies is the kind of movie that you don’t want on your resume, a film that can really kill your career if you don’t make a comeback. Like Troma’s equally terrible Redneck Zombies, this movie from director Krishna Shah (with his name spelled wrong in the credits) takes a terrible premise and runs with it for over an hour and a half. Yes, that’s right – if you thought that Hard Rock Zombies would be a short affair, a get-in-and-get-out film, you’re damn wrong: the horror comedy winds its way through various stages of really, really strange scenes before finally and mercifully ending with a whammy bar snarl.

If one good thing came out of the film, it’s that Phil Fondacaro got an early start here as the midget Mickey, who hangs out with a creepy-looking dwarf guy with a boiled face. Fondacaro doesn’t show up much, and he doesn’t even use the same name in the credits, so perhaps he was as ashamed with Hard Rock Zombies as I’m sure rocker E.J. Curse was. 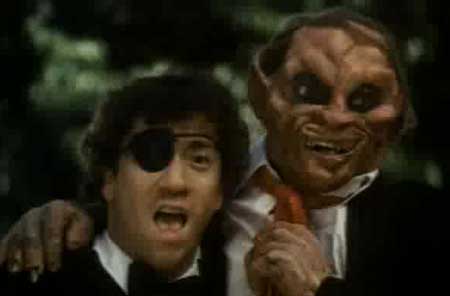 Here’s the thing – the film never takes itself very seriously, which is good, because there’s nothing about it that anyone could ever take seriously. But there’s no relevant theme to the film at all, because Shah jumps all over the place; the town of Grand Guignol (very subtle) has werewolves and Nazis and Hitler and zombies and demons, all at once, and it’s so oddball and wacky that it’s tough to concentrate on the real plot of the story.

The zombies come into play about halfway through, after the werewolves and Nazis kill all of the band members. Those dudes come back from the dead, maybe because of some song that lead bassist Jessie was playing before he died, and then all of the townspeople turn into zombies. Along for the ride is Elsa (Lisa Toothman), a killer girl who likes to dance in the streets in spandex and do aerobics during rock concerts. 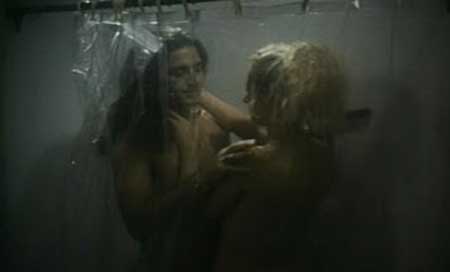 Did I mention that all of the band members do a macarena-style dance as they kill people?

It’s hard to write all this out as an explanation for what you’ll see in Hard Rock Zombies. There’s all of this and more, and you can expect to be confused and bored throughout. If you’re drunk or high or a huge fan of ‘80s rock, you might feel transported back to a time when people were judged by the length and height of their hair, when dancing meant doing a spider walk down the street in what some people might consider pajamas, or when people snapped their fingers to hard-hitting “metal.” 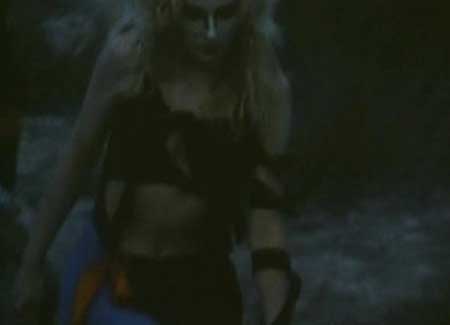 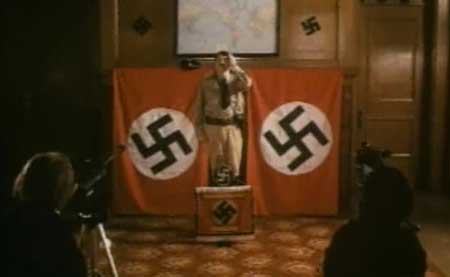 For those who aren’t on some sort of hallucinogenic drug, it’s going to be pretty hard to get through all of the musical numbers and montages. Yet Hard Rock Zombies does efficiently make a mockery of Hitler and his Nazi regime – I guess that’s a positive thing, right?