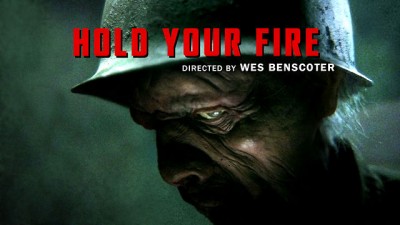 Any aspiring filmmakers reading this would do well to check out the beautifully – though horrifically – captured atmosphere during the short film, Hold Your Fire. Its desolate mood is introduced from the get-go and remains strong throughout, with the gritty colour palette and eerily bleak location suitably in place. In terms of the visuals, I would give this 100% and so it would not come as much of a surprise to realise that director Wes Benscoter used to design artwork for a selection of high profile metal bands (such as AC/DC, Black Sabbath, Slayer and even Kiss). 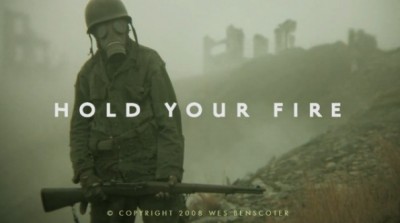 In my opinion, Wes Benscoter has proven to be a brilliant example of how these skills can be transferrable – film is an art form after all. The creativity that went into making this is also highlighted through the heavy symbolism featured in Hold Your Fire, sparking questions and debate amongst the viewers – something which is always the sign of a great film. Hold Your Fire doesn’t shove itself down your throat, but allows you to choose what you take from it. For this reason, it could even be described as a fairly abstract piece, with fluid metaphors and subjective interpretation. 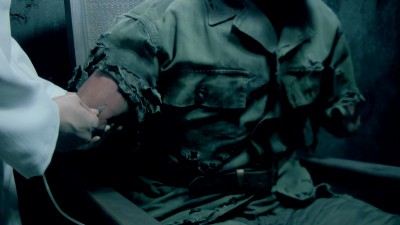 Although Hold You Fire was actually made a few years ago, the topics it explores are still relevant today and so this gives the film an added poignancy which works well to send chills down the audience’s spines. There’s a certain anti-war message used which has a timeless quality to it – these feelings were present during the sixties regarding the Vietnam War yet also with the 2003 ‘war on terror’. This immediately provides a large fan base for the film who share the sentiments exhibited by the main character of Hold Your Fire. One only has to look at the mutilated, helpless body of the war veteran to realise the full scale of damage that war can cause. On countries. On families. On individuals.

The quality of Hold Your Fire has not gone unmissed, as it proceeded to win the Best Live Action Short at the Fantasia Film Festival of 2009. Anyone interested in a short, dark film exploring some very real issues would do well to check out Hold Your Fire. It’s scary because it’s true.