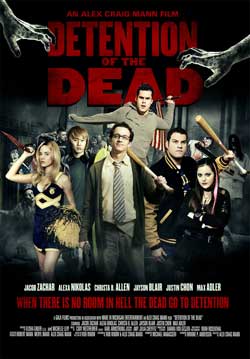 A group of oddball high school students find themselves trapped in detention with their classmates having turned into a horde of Zombies.

If you’re going to make a comedy-horror film with zombies then you need to be pretty confident you can deliver. When Shaun Of the Dead was released in 2004 it raised the bar not just for this genre but for any comedy with a darker edge. Now we have Detention Of The Dead which doesn’t try and emulate it’s illustrious predecessor, but tries to more parody this and other horror tropes. 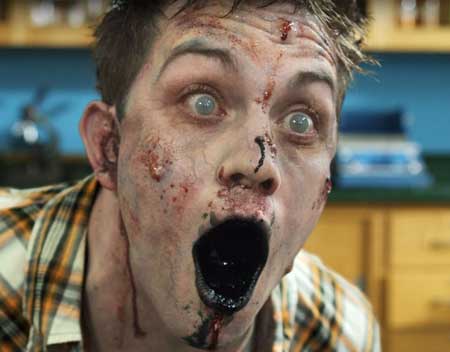 The film opens with a nerdy student Eddie (Jacob Zachar) on his way to detention for the very first time as punishment for an as yet unknown, but apparently serious crime. There he is joined by the usual high school film candidates in smart, sassy goth Willow (Alexa Nikolas), prom queen Janet (Christa B. Allen), muscle headed jock Jimmy (Max Adler), stoner Ash (Justin Chon) and all American cool kid Brad (Jayson Blair). If you’re immediately thinking The Breakfast Club then you won’t be alone; initially they all mostly hate each other but over time maybe they’ll begin to understand each other a little better?

Anyway, pretty much straight away, around 10 minutes in, they realize they are in a zombie apocalypse with their school at the centre and the only plan they have is to barricade themselves in the library where no student alive or zombiefied would consider going. The film then becomes a battle for survival as with dwindling numbers they attempt to escape the clutches of the undead while still managing to go on their individual journeys of discovery. 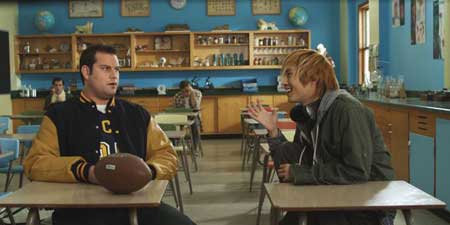 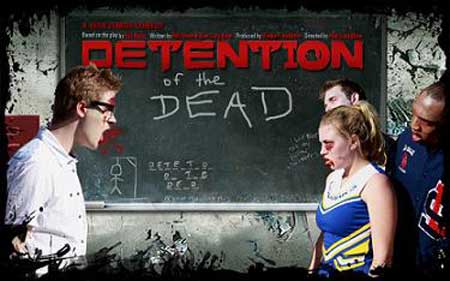 If I sound a little dismissive that isn’t my intention. Of course Detention Of The Dead is filled with cliché, and yes it’s not very original but the film is just good fun. Writer and director Alex Craig Mann has based his production on a play by Rob Rinow and this is partially the films strength. The majority of the action is set in the library, on one set, and this means that, as with most plays, the main story must revolve around the characters and not rely on huge set pieces or effects to carry it along. The direction is simple and yet effective and compliments the simplicity of the production.

The characters are the films other success. Each one, despite being the stereotypical students you see in every high school movie, is likeable or humourous enough to make the audience care what happens to them and there are some genuinely funny moments. There is also a terrific soundtrack which reminded me of all those John Hughes films from the 1980’s! 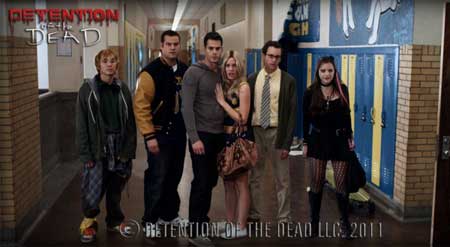 It would be easy to pick holes in Detention Of The Dead. The plot is predictable and if you can’t figure out who lives and who dies then you haven’t seen enough horror films. The effects are a little suspect but seem to played for humour so this doesn’t become too much of an issue. The film also makes absolutely no attempt to explain why there is a zombie apocalypse taking place or why it seems to happening at the school but if you don’t worry about that too much it won’t affect your enjoyment of the film. 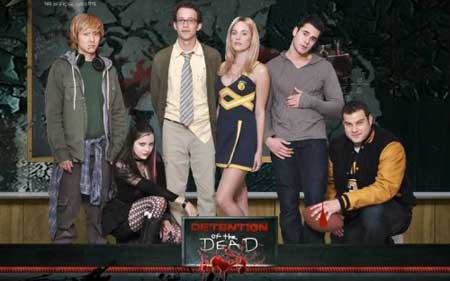 At the end of the day this is a good-natured film made by people who seem to know and love the genre. There are nods to Romero all over the place, some are subtle, some are like a baseball bat to the head, but these references and other zombie tropes are handled reverently and with respect. The film does slow down a little in places and does descend into silliness from time to time but these issues can be forgiven on the whole.

I wouldn’t necessarily recommend that anyone actively seeks Detention Of The Dead out but if it comes on television or on demand on a Friday night then it is well worth a watch. It won’t stay with you or warrant repeat viewing but if you take it for what it is, an enjoyable zombie comedy with few pretentions then you may just chuckle from time to time.