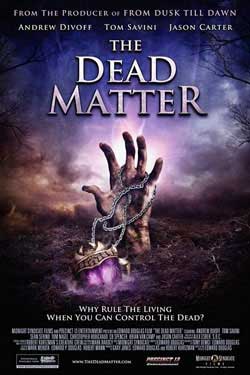 Tells the story of a vampire relic with occult powers that falls into the hands of a grief-stricken young woman who will do anything to contact her dead brother.

Don’t stop here – Watch the Trailer for “The Dead Matter”

A young woman is guilt-ridden and depressed over the death of her brother and hey, who wouldn’t be, right? After several supernaturally inspired attempts to contact him on the other side end in failure, by shear luck and good plotting she comes upon an ancient mystical scarab charm necklace that she soon finds out just so happens to control the dead. Or should I say undead, as he (or she) who controls the scarab also commands and controls an army of zombies. Not the brain-eating kind, but the mindless, kill-on-command, at-your-command, by-your-command kind of zombie – my kind of army right there! But wait, there’s more… 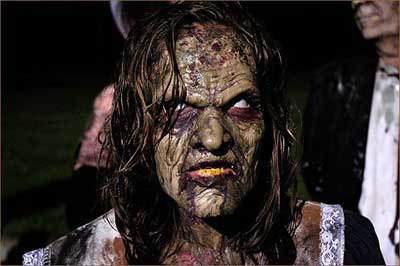 There also just happens to be a couple of vampire dudes who have no doubt been fighting back and forth with each other for centuries – one who is embracing a new way of life in a very GODFATHER type of role and another who refuses to renounce the old ways – who are after the scarab, each for his own degrees of nefarious intent. And guess who’s caught in the middle of all this mess? Damn right – the guilt-ridden girl and her friends. Enter a fearless vampire hunter into the mix, and what we have here folks, is one hell of an epic G vs. E tale unfolding in front of us. So pass the nachos and tequila and make some room on the sofa for me – we got us a good time bout to start here!

Let me start by saying this right out of the gate – I really wish this flick had gotten a nationwide theatrical release. Sparkly, sanitized vampires glowing with emo-angst-ridden lust have been steadily littering our screens for the last couple or three years and honestly, sitting through one of those lazily written tales of a boring teen torn between two different, even more boring, groups of vamps and lycans has been more than enough to make me want to drive a stake through my own heart. I was very much afraid that the days of brutal vampirism in the vein (get it?) of 30 DAYS OF NIGHT had been forever whitewashed into a six-movie deal of a love triangle.

Now, finally, someone has stepped up and said, “There will be none of that sh*t goin down in MY house!!”, and I will forever be grateful Mr. Edward Douglas for bringing back the true vamps of old. I’m not saying this is balls to the wall action in the 30 D.O.N. style. There is action and oh yes, there is blood, but there is also style, substance, and much like onions and ogres, layers. Good old fashioned storytelling here, folks. I’m talking multiple story arcs and conflict-ridden characters all very well written and all coming to a believable culmination by the time all’s said and done.

On the acting front, you’d better believe your ass that once again and as always, Divoff and Savini never disappoint. If only they had more screen time together to add to their epic battle…but hey, even if they were on screen together for every second of every frame and this were an eight-hour miniseries, I’d probably still bitch that they weren’t together enough. After all, this is the Djinn and Sex Machine on screen together dammit, so that’s just the geek in me coming to the surface again. Everyone else did their jobs extremely well…when you have great material to read from, you can’t go wrong. Only one small complaint about the whole deal…Sean Serino is a very beautiful young lady, but I just could not wrap my head around why such a pivotal character with so much happening to her and around her and with so much conflict in her life would be portrayed as so spacey and aloof the whole way through the flick. It was almost like she was about 37 doses too heavily into Prozac Heaven. More than once, it almost took me out of my viewing experience, but thankfully everyone else brought me back where I needed to be.

I must also send a special shout out to my dear, horrorific fiend from up North, the lovely and talented Jen Sharlow, who portrayed Concubine. Tis a small role, sadly, but she’s still been on film more than I have with my face made for radio, right? So watch for her, drool over her, want her for yourself, but most importantly, cast her…there’s a ton of heart, talent, and brains to go along with that body just waiting for a horror audience to revel in.

In trying long (giggity) and hard (giggity) of something more recent to compare this flick to in order to peak your interest like mine was, my mind went completely blank. It defies every single page of the current Hollyweird rulebook of horror moviemaking by being neither a remake, a former TV show, nor edited in today’s standard quick cut Super Hi-Meth mode – it’s an actual story unfolding right before your very eyes, just like the old Dracula movies from Hammer Films did back in the late 60s to early 70s. So there you have it, I guess – it’s like a modern Hammer film! THE DEAD MATTER is available at Hot Topic stores (that’s right, I said Hot Topic) located in thousands of malls near you all across this great land of ours, and it’s available right this very second. So don’t wait any longer – get your ass out there, support incredibly well done indie horror, and put this sucker in your DVD collection!!!