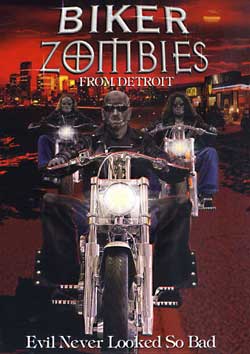 It’s an exciting prospect, to view a film from your neck of the woods when your particular neck isn’t a common stomping ground for motion pictures.  Thumbing its nose contrarily at its own title, “‘Biker Zombies From Detroit” (“BZFD” until the final paragraph) is set in the suburb of Grosse Pointe, yet shot in every surrounding city that isn’t Grosse Pointe.  I live just up the street from where some of this was filmed.  That merits note to your average country bumpkin, which I am at heart.

Fret not, friends.  I refuse to bring an overly favorable comportment to a viewing merely because the movie is locally produced.  After all, with a title like this current offering, one finds it tough to even pretend to foster expectations going in, which “BZFD” definitely has in its favor.  Created on a budget approximating the change I lost to my sofa cushions last night when I passed out whilst watching “The Adventures of Ford Fairlane,” this is one poor example of proper film making.  Amateurish in nearly every respect.  However, the same can easily be said for “Ford Fairlane,” and yet it still called out to me like a siren from my Netflix queue. 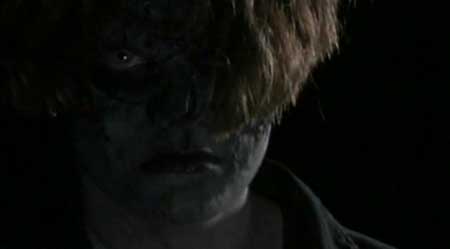 Though an insane amount of time is spent upon characters and dialogue more apropos of an “After School Special” from the days of yore, “BZFD” does tend to think a bit more outside the box than the standard zombie flick. The opening credits, a slow and lusty crawl about a chromed-out tankslapper (for those of you not hip to the lingo, I have no clue what that means either), try to be so simultaneously artful and foreboding, you’ll want to enjoy it.  Unfortunately, that two minutes stretches out into a small eternity at around the twelve-second mark.  We are then introduced to the true villain of the piece, a disembodied and profane voice that has returned to “The D” to assemble an army of zombies and carry out its maniacal plot to transform the city into a living Hell.  I wonder if anyone in Detroit would even notice?

The Angry Voice Over (I didn’t catch the actual credit, nor do I wish to) employs his minions in a fashion that reminded me so much of corny 80’s sci-fi thrillers (“Galaxy of Terror” and “Lifeforce” being two of my faves), it all started to grown on me once again.  The vengeful spirit wisely chooses the most deplorable human beings it can find, then sneaks up on them and zaps them with a poorly animated but colorful energy ball oddly reminiscent of the female alien banging Steve Guttenberg in “Cocoon.”  It begins by transforming a rapist in an alley after he overtakes an innocent bar patron.  At one point later on, it possesses a martial arts expert and assassin to fulfill its horde.  Shrewd move, Angry Voice Over.

New kid in town Ken (Tyrus Woodson) befriends cutie Courtney (Jillian Buckshaw) immediately upon moving to Gross Pointe from Hell, Michigan.  (oh yes, it exists)  This runs him afoul of local bikers, one of whom (Joshua Allan) struck out with Courtney on a prior date in which he brandished the most brilliantly inept come-on line in film history, after unzipping his fly once she refuses to kiss him: “You think this hog is gonna’ smoke itself?”  It’s great stuff at times.  I don’t believe this is entirely in ways intended upon by the film makers, but great stuff nonetheless. 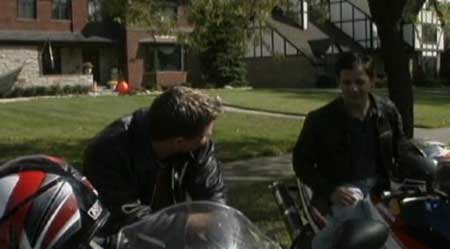 The zombies seem bent on brutal and murderous anarchy, as opposed to eating brains and the usual undead tomfoolery.  They thrill kill mostly, collecting heads of their victims in service to their dark lord.  I think.  The purpose of the decapitated noggins is never fully explained.  When Ken, after escaping the spiteful ruffians on a motorcycle chase that barely rises above a reasonable speed, runs into the evil gang, it is assumed that he is another victim.  Or, we assume that’s what is assumed, since not even the local police officers (Dave Cunningham, Gabrielle Gamache) pay any mind to the murders going on around them.  They’re more concerned with the intentions of Courtney’s suitors than actual law enforcement.  Meanwhile, biker zombies run amok, slaughtering at will.

The effects, both in the make-up and practical death departments, are impressive considering the budget restrictions.  The murder and mayhem scenes are more effective than they deserve to be, in the smattering of instances when they actually occur.  Director Todd Brunswick and writer John Kerfoot deserve their props for keeping the entire ordeal from the precarious brink of utter rubbish, though just barely.  Brunswick continued on after the 2001 release of “BZFD” to write and direct within the low-budget genre (remaining predominately in Michigan), and Kerfoot also wrote and directed for a few more years before disappearing off the face of IMDb.  Though spectacularly flawed in their fledgling outing, there does show a glimmer of promise beneath the flapping jaws and numbing inaction. 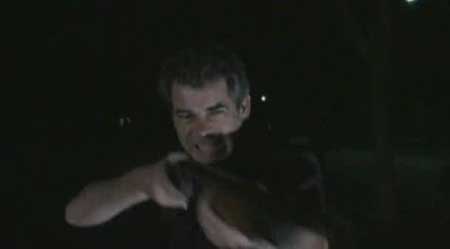 The story of Ken and Courtney finally melds with that of the possessed gang about thirty minutes after you’ve relinquished all hope of it, and delves into slightly disturbed territory as it hastily wraps up.  The ending comes so abruptly and with so little regard for anything thematically proceeding or even the tiniest semblance of closure, it’s nearly inspired.  A complete mess, without doubt, but it brings fitting conclusion to the forgettable 80 minutes.

Perhaps I am feeling a bit biased toward Michigan-produced indies, even those as low-grade as “Biker Zombies From Detroit.”  It’s attempt at being both a cool biker flick and a cool zombie flick backfires on both counts, coming up rather dull in both categories.  Still, there’s something to be said for failed panache.  As awful as this one is when you get right down to it, I kind of liked the cut of this flick’s jib.