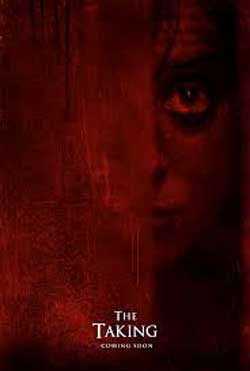 Two strangers must discover a way to escape a sinister family who wishes to sacrifice their souls to an evil presence.

Allow me to make myself perfectly clear here.  I love existentialism in film.  From the roots of Bergman, Godard and Kurosawa up to the contemporaries, I can’t get enough of this crap.  Considering some of the stinkers I’ve had to muddle through as a humble service to you, friends, I need a grown-up movie from time to time to dust off the bric-a-brac of my addled brain.  And no, I don’t mean p*rnography.  Okay, mostly I mean p*rnography. 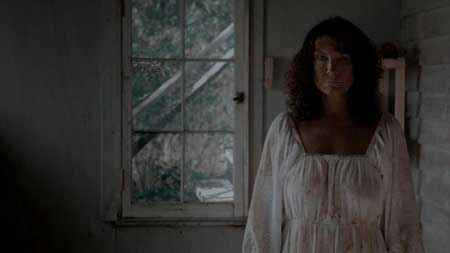 To combine elements of the intentionally inexplicable into horror is a daunting endeavor indeed, one that the likes of Kubrick and Hitchcock merely dabbled in (brilliantly) throughout their careers.  In recent years, Chad Ferrin’s “Someone’s Knocking at the Door” from 2009 was so very close to a home-run, had it not been for the puss-out final twist that didn’t work for “Jacob’s Ladder” in 1990.  Calvin Reeder’s demented “The Oregonian” was an outstanding 2011 offering, and a perfect example of a living, breathing nightmare captured on film.  “Rubber,” quite possibly one of my favorite horror flicks (if you can call it that) of all time, introduced us to the chaos theory of “no reason,” a key element in the theatre of the absurd. 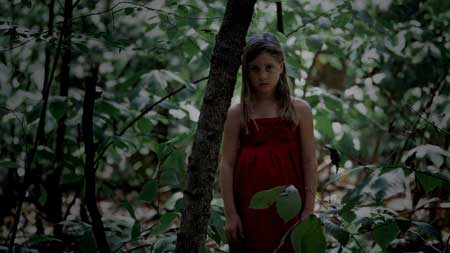 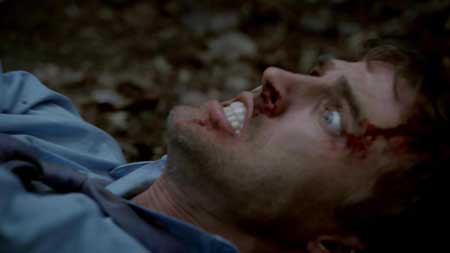 (Author’s Note: I refuse to mention the veritable shopping list of David Lynch masterpieces that I really want to flood into this conversation.  Come on, “Eraserhead,” “Blue Velvet” and “Mulholland Drive” are essentially horror films that embrace the grotesque disorder lying in wait everywhere around us . . . I’m done.  I reference the dude in my reviews too much as it is.  Now, he has his own paragraph.  Dammit.  Any road, continuing:)

What I adore the very most about existentialism is that it can make you think deeply as well as feel.  Unless poorly handled.  In that case, it can only fall under two factions.  There is the truly excruciating, and I am looking in your general directions, “Siesta” and “Enter the Void.”  However, there is also the painfully dumb, which is often worth a laugh or two if nothing else.  “The Taking” falls, thankfully, into the latter category.  It tries so very gallantly to capture an artistic interpretation on screen, that it forgets to be a movie.  Hence, why it is both a crime against fledgling film makers everywhere and a riot at the same instance. 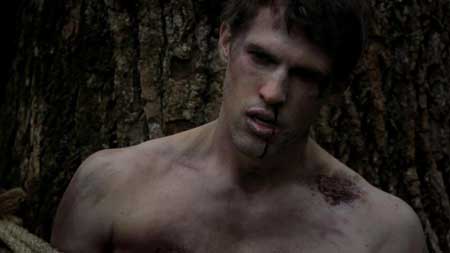 The . . . plot?  I suppose that is what you’d call it, so let’s go with that word.  The plot is quite rudimentary, when you boil it down to the core.  Two strangers find themselves bound in the middle of a forest, awaiting sacrifice from a backwoods family to a malevolent force that seems to occupy only one frame of stock footage the entirety of the film.  They experience random hallucinations, in which they relive regrettable moments from their recent pasts.  We know these spells are coming on when they begin shrieking and convulsing like something cool is about to happen.   By this point in the game, however, I already knew better. 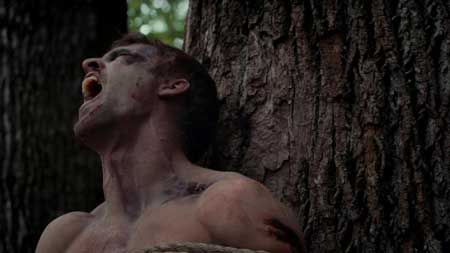 I can’t say enough about the voice in the trees/sky/sun/breeze, that speaks in a ghoulish gibberish spelled out with subtitles as it orders horrible deeds from pretty much every cast member.  It gets funnier every single time it occurs, and in moments resembles an unsuccessful tampon commercial in both dialogue and execution.  “Summon your creator, architect of the defective.”  This is a random example of the gobbledygook babbled by the Supreme Master of That One Small Section of the Woods.

Aside from that voice, there is very little dialogue throughout the entire first half.  This turns out to be an attribute once the actors begin talking.  Though the lines afforded them, as they try to figure out their predicament, are wooden at best, the performers look as bored with the proceedings as we do when they open their mouths.  John Halas as Carl and Alana Jackler as Jade do what they can through the murk, but they are, like everything else, merely second thoughts within a piece that feels entirely made up of second thoughts.

I do not wish to poke further fun at “The Taking,” because although it’s as inept a picture as I’ve seen in recent memory, it tries so very hard.  Instead, I am going to bestow upon you my top five favorite lines warbled by the evil trees/sky/sun/breeze god, in no particular order:

“I shall adorn your hatred.”
“Embrace new birth.  The freshness is yours.”
“May it confront your destroyer.”
“Your vessel is merely a cache of hatred.”
“Your legs cannot carry you beyond the ambit of this holt.”

One of these is actually a fake I made up for the tampon commercial scenario.  Guess which one, and you’ll win nothing!  I’m still not exactly certain to what purpose these otherworldly utterances are supposed to serve.  Writer/Directors Lydelle Jackson and Cezil Reed try to their damnedest to make this train wreck work, but it crumbles from the very first opaque moment.  What it all amounts to is that same unsteady sensation that the greats can bestow upon us in their creations, but can very easily be delivered alongside unintentional guffaws in the hands of wannabes.  So very easily, as “The Taking” ably provides surefire testament to.

For its completely misguided yet whacked-out sensibilities, “The Taking” as a film delves into territories most don’t possess the cojones to trod.  For my part, I’ll remember the laughs.  Though a failure, without a doubt it’s a commendable effort.  But, is it recommendable?  Oh, hellz no.