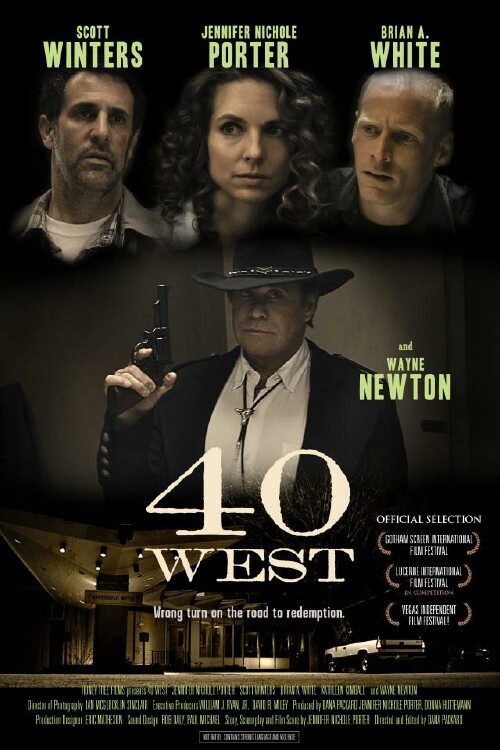 Through a series of events beyond her control, Maeve, a Blues musician, finds herself trapped in a sordid East Texas motel room with her violent husband, Colin, who, unbeknownst to her, has been released from prison early. Held hostage with her is Elijah, a professed Good Samaritan and fan of Maeve’s, whose interest in her seems disproportionate to his claims. Colin has tracked Maeve down and waylaid her in order to apologize for his past behavior with a special present he’s picked out just for her – a twisted surprise that opens a raw and anguished chapter of their shared history. But Colin’s carefully laid plan is interrupted by an unexpected visit from his jailhouse girlfriend, Arlene, and the imminent arrival of her jealous, homicidal husband, Bud Sankey, whose sights are set on Colin.

I wasn’t quite sure what the premise of the film would be about with such an ambiguous title such as “40 West”. Now after watching the film, my assumption was that it refers to our main character Maeve (Jennifer Nichole Porter, also credited story-writer) who is seen in the film’s beginning en route to an undisclosed location (highway 40??). In any case, my recommendation here would be to at least illustrate the cover with some sort of clue for future viewers.

“40 West” is a quite the dynamic thriller. One that only needs its single focal location of an off-road hotel room. Maeve is a Blues songwriter/singer who despite being gifted with a talent and a beautiful voice, is haunted by a past that is appearing to catch up with her all in 1 night. After being mugged (after a Texas location performance) at an small gas station, a man by the name of Elijah (Scott Winters) comes to her aid offering to pay for a night’s stay at a nearby motel until he can aid her in the morning (her car won’t start).

Awkward but friendly, Elijah is revealed very early on to be a hired gun who was tasked with reporting on Maeve’s activities and where-about’s. It doesn’t take long before Mauve’s ex-con husband comes a calling to settle a few scores, offer Maeve a gift, and usher her past into the forefront with a hopeful return to his wife who he hasn’t seen in 5 years. Colin (Brian A. White), a jealous and former wife abuser is not a welcome site to Mauve who is trying to understand why this night is going so poorly. Soon she discovers the answer to that and that her husband has no intention of letting her leave (by holding her hostage without accepting his apology and “gift”).

The hotel room soon becomes a scene for a whole dramatic storyline that unfolds thru past incidents brought to the surface. Colin who knows his wife will escape at the first chance she gets, handcuffs Maeve to bed while things start to get more intense and violent.

Let’s just say that Colin is not a past acquaintance that is going to let this night go down without some heavy payback under his terms. Meanwhile, a man by the name of Bud Sankey (Wayne Newton) is on his way to the hotel room to settle a score with Colin who was cheating with his wife Arlene. Arlene shows up in hopes of running away with Colin only to complicate the night
more and the drama in progress.

While this film, directed by Dana Packard, carries a small and misleading title (I wasn’t sure if it was a western, an address, or a love story), it manages to showcase some incredible acting chops especially in lead actors Jennifer Nichole Porter and Brian A. White. Porter, the victim of the film keeps things soft spoken and mysterious all the while eluding to a past that has not been so kind to her. White, is the perfect badman villain who expresses a range of emotional offerings while trying to stick to his intentions for the night. We never know where all the pieces are leading but understand everything by the time the credits roll. While this film is currently off the radar, it is recommended as a high energy drama thriller that gives its viewers a powerful storyline and a powerhouse performance.

I’m convinced after watching “40 West” that Wayne Newton, has a career in intimidating crime lord roles for producers looking for a talent that meets this need. Together, all the actors provided a dynamic range of characters that move quickly from high to lows and back again. It’s definitely worth your time and exceeds many of the independents releases out on the market. My only criticism besides the name would be the “also” misleading logo on the front that states “winner Best comedy….). As there is nothing comedic about “40 West”.

The film was produced by new comers “Honey Tree Films” who have also featured Dana and some of the talents in its other productions. Jennifer Nichole Porter has small part in the horror film “The Langoliers”. Brian A. White has been featured a range of drama/action films.