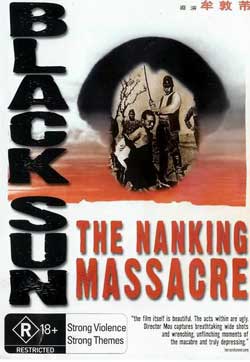 In 1937, Japanese troops raid the Chinese city of Nanking to execute a planned massacre by subjecting over 300,000 helpless civilians to various tortures and atrocities before slaughtering them all.

In 1980, while working for Shaw Brothers Studio, Chinese film director Tun Fei Mou decided he was done with kung-fu movies and considered doing a children’s movie. Around the same time, he began learning about Unit 731, a secret biological warfare unit set up in China by the Japanese near the onset of World War II. This newfound interest led to Mou creating the controversial Men Behind the Sun (1988), a fact-based exploitation film famous for its graphic depiction of historical wartime atrocities, infamous for two distinct scenes involving a cat and a real human cadaver, respectively. This was not the children’s movie he had contemplated. 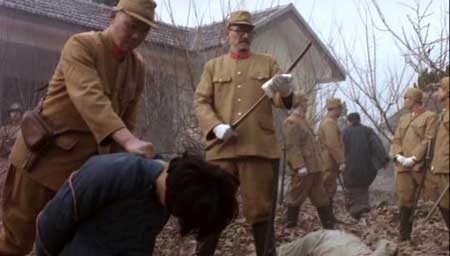 After Men Behind the Sun, Mou was fairly quiet for a period of time, aside from his work on Xue lian (Trilogy of Lust), a Chinese crime thriller/p*rn. In the meantime, Godfrey Ho (better known for his work as director of Ninja Terminator, Ninja Dragon, and Ninja Destroyer, among others) picked up the mantle, directing two “sequels” to Men Behind the Sun (Maruta 2: Laboratory of the Devil, and Maruta 3:…Destroy All Evidence). These movies continue in the same vein as the original, but are overwhelmingly considered re-hashed efforts and, for the most part, a waste of time. Finally, in 1995, Tun Fei Mou returned to the franchise with Men Behind the Sun 4 (Black Sun: the Nanking Massacre).

Rather than focusing on the biological weapons or the human experimentation this time around, Mou focused instead on the Japanese invasion and takeover of the Chinese city of Nanking. On December 5, 1937, the Japanese military invaded Nanking. By December 13, the takeover was complete, the city had fallen, and the slaughter began. 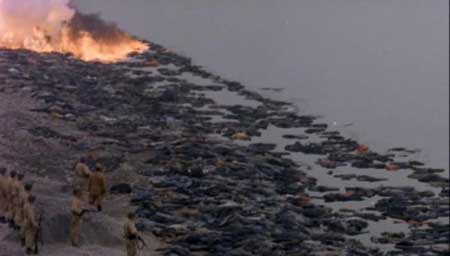 Men Behind the Sun 4 (MBS4 going forward) is a horror movie only in the sense that war is horrifying. However, there are more than enough disturbing moments to place this movie in the “extreme” category. And while there are no ghosts or demons or monsters featured here (at least in the typical sense), there is a real, historical evil throughout the entire film that cannot be ignored.

There isn’t a linear storyline to MBS4, but instead a small handful of overlapping vignettes detailing the horrors and atrocities inflicted on the citizens of Nanking. Interspersed within the director’s researched depiction of the invasion and subsequent occupation is gritty, stock footage that survived the time. While the filmed scenes are exploitation at its finest, the stock scenes of beheadings and torture victims pull the viewer somewhat back into reality, reminding us that this was real. 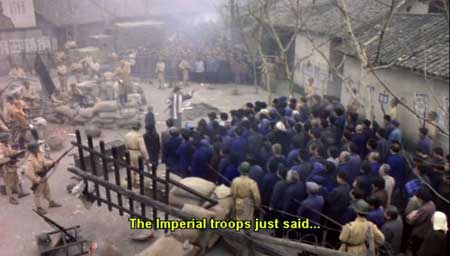 Tun Fei Mou may have exaggerated a bit here and there in an effort to show the pure evil of the Japanese, but this is an exploitation film, and we wouldn’t have it any other way. Every Chinese woman, no matter the age, is a potential rape victim. The soldiers have killing competitions amongst themselves. There is an abortion-by-bayonet, as well as a baby thrown into a rice cooker. A man is burned to death for not bowing to the Japanese military. And when a Buddhist monk refuses to be humiliated by being sexually forced on a woman who was disguised as a man to avoid inevitable rape, he and his genitals are separated from one another via Japanese sword. Again, not the children’s movie he was thinking about making.
Exploitation aside, there are two very powerful scenes in MBS4. Early on, there is a meeting between a Lieutenant General of the Japanese army and a samurai. Their deep discussion revolves around the purpose of swords and symbolizes the difference in thought between ancient wisdom and current military thought, philosophy versus might. There is no visual horror here, but it is a very interesting exchange. 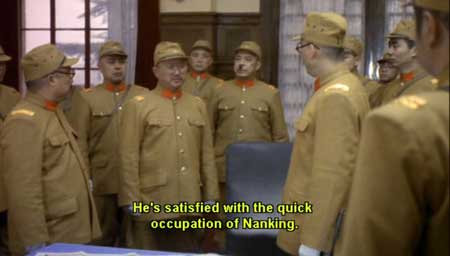 Throughout the movie, there are scenes of Chinese citizens being shot and killed along the coast, thousands upon thousands of bodies covering the beach. Often times, the citizens are allowed to run for their “freedom,” then gunned down by laughing Japanese soldiers. In an effort to cover the fact that many of these bodies are not just soldiers, but mostly citizens, they set fire to the entire coast. Flames engulf the mass of corpses, black smoke clouding the sky, and we catch a glimpse of Tun Fei Mou’s potential as a director. It is at once both mesmerizing and horrifying.

300,000 murdered, 20,000 raped, one-third of the city destroyed. Mou drags us back to reality as the credits roll, giving lists of victims as well as the fates of some of the key players on the Japanese side. In the end, Men Behind the Sun 4 (Black Sun: The Nanking Massacre) is equal parts fact and exploitation, detailing another in a long line of historical wartime atrocities. 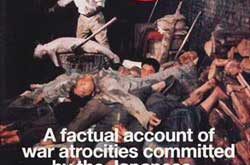