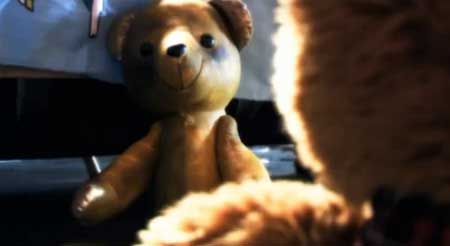 6 year old Sam gets a birthday gift – a new teddy. Old Ted is not so pleased with this turn of events. A short horror filmette from Rob Parnell for R&R Film.

I must say, this was an utterly mad short film to watch. I can’t describe Bearz as an animation as such, because it wasn’t really, but there aren’t actually any live actors involved in this. There’s just a bunch of frantic clips thrown together, coupled with a bizarre collection of diegetic sounds. I must admit that the disembodied voices did unsettle me a little, but mostly it was just silly. But it was very aware of its silliness and does not take itself too seriously at all. It is yet another example of seeing how far ‘horror’ can be stretched – I understand, it’s hard these days because everything has been done before. Boundaries always need to be pushed, and say what you like about it, Bearz definitely pushes boundaries.

With the popularity of the recent comedy movie about a foul-mouthed teddy bear, Ted, I wasn’t too surprised to see a film about a teddy bear serial killer (whatever next?!). It is an interesting idea to turn this sweet, cuddly toy into something intent on destruction. This is especially true when we think about the various connotations that a teddy bear has, like the fact it is associated with childhood and comfort and innocence. Using a teddy bear as a serial killer is pretty much a complete jaw dropper and has a bigger shock value than most other horror villains.

I feel like a comparison could also be made to another classic silly horror film about an evil toy, which is Child’s Play (as in Chucky, in which a serial killer conducts a voodoo ritual to place his soul inside a toy doll). Also, I can’t help but make a connection with the similarly crazy ‘horror’ film called Rubber, which is about a telekinetic tyre which goes around making people’s heads explode. It’s just so random and different to anything audiences have seen before that there’s a part of you which can’t help but enjoy what you see. I think an accurate description of Bearz would be that it’s a Toy Story for horror fans. It’s for those people who always wondered what their toys get up to when they’re not around – for some reason, this idea continues to fascinate us. Even horror fans, apparently.

Visually, Bearz was very different but I personally didn’t feel that it was all that exciting to watch. I always respect filmmakers who aren’t afraid to be experimental and stray from conventions, however, I’m not sure if the gamble paid off in this case. Once the initial shock had worn off, the rest of it played through in a jumble of insanity, although I think it had the potential to be great.

Written, scored and directed by Rob Parnell, I was surprised to see that he has got his own YouTube channel dedicated to giving online help to aspiring writers. I have got to admire his passion for the creative arts really, and Bearz, though lacking a certain depth which many other short films have managed to achieve, does have an element of fun and playfulness about it, which proves Rob Parnell’s dedication to creating quality short films.