What is your definition of a great Scream Queen?

Scream queens have evolved over the years. They’ve gone from being just the damsel in distress running screaming from the killer, to being much more heroic. They are now the sexy, strong, smart ones who defeat the villain in the end and survive. They are no longer waiting to be rescued by the hero. A great scream queen is not afraid to get bloody for the part and is someone who can show a wide range of emotions in her character. Scream queens are not perfect like a stunning playboy centerfold, but they are someone who is attainable to the average male audience. You have to be sexy, but you have to be someone the audience will relate to, someone they will cheer for in the end

Our Horrornews.net community wants to know what you’re currently working on ?

As far as horror goes.. I did a short called “Slicing Beauty” with Moongoyle Entertainment, a film called “Dead Collections” by John Orrichio , “Cut” bt Joe Hollow Films, ” The Wishing Box” by Robert Noel Gifford Films, and I also had a small role in “Breeding Farm” by Principalities of Darkness. This movie I worked on seven years ago called “Fairview Falls” by Light & Dark Productions finally came out as well.. You can check out my imdb page for more info:  I actually just did a cool commercial for the tribecca film festival in nyc where i was a latex dominatrix alongside a fire breather and a flying hawk :) That was pretty cool 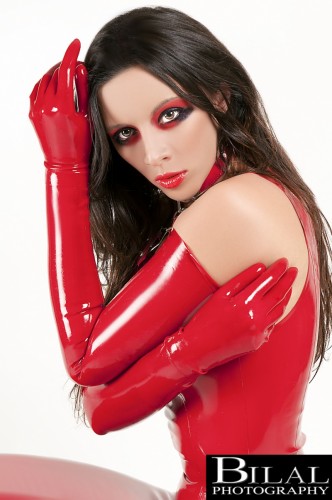 Do you think it’s harder getting horror movie work on the East Coast?

I don’t go looking for acting work because I’m not an “actress” per say, I’m mostly a fetish/nude model. I pretty much only do acting projects if someone asks me directly, if it’s a friend, or a friend of a friend. What I mean is I don’t go out looking for acting work .But I do agree, there is much more film work in the los angeles area , as lots more tv and film stuff is shot out there. However, there is also a lot more competition out there though, as everyone moves out there to get into the film industry. I know so many people who moved out there to be a big shot…and are now full time waiters….or club promoters. I’m fine staying in nyc. Haha.

I’m going to ask the dreaded horror movie re-make question. Are you for remakes or against them?

Remakes are cool. I generally dont like older movies , so I prefer the newer updated versions .I like how much higher quality everything is now such as the special fx makeup and effects and things like that . The art direction and set design is also much better. You’ve worked with some talented directors. Who do you think brings out your best work? I liked working with sv bell , geoff klein, and andre dubois in montreal. I also liked working with glenn baisley in the US. He gave me my first lead role with Fairview Falls.

What is your comfort level when it comes to nude scenes?

I am fine with non-explicit tasteful nudes.. but that’s it.. The most I will do is light girl -girl stuff but no beavertastic action.

Think back to when you were a kid. Is there a single horror movie that just scared the hell out of you?.

The only thing I can remember watching when I was younger was “The Howling” and all the sequels and “Pet Cemetery.”

What’s the craziest thing that’s ever happened to you or around you while filming a movie?

I got a ticket for being topless in a park that we weren’t supposed to be at. That sucked but at least the director paid for it.. On another set, one of the actors had a hissy fit and slashed a fellow actor’s tires. He was acting like a big “macho man” but he was really a little bitch lol.

If you could work with anyone in the horror industry, who would it be?

I don’t have a particular favorite filmmaker in the industry. I loved the first few SAW movies… I just love all the art direction and crazy sets in the film. I have always been a fan of horror movies and its always something I was interested in being a part of. I always gravitated toward darker type of things.