Tell us about your character Donna Thompson in The Bay?

I had the privilege of playing a strong female character whom I have so much admiration and affection for. The writing of Donna (by brilliant screenwriter, Michael Wallach), was so rich with opportunities to experience the whole gamut of emotions and while Donna is the comedic relief of the film in many ways, what she experiences is also extremely tragic, so it was wonderful as an actor to be funny and dramatic. On the surface, Donna is a quirky, funny, light-hearted spirit who might be easily pigeon-holed as too bubbly to really have any depth, but beneath is a courageous, compassionate, bold, tenacious woman who will risk and sacrifice her own life to inform the public of what they need to know.

My character is a student at American University interning at a news station in Claridge, Maryland. I’m assigned to cover fun, light-hearted July 4th festivities, but all of a sudden people in the town start dying and breaking out in obscene rashes so I quickly shift gears and start doing some investigative reporting thinking I’m uncovering a murder mystery. The FBI ends up ordering me to stop reporting because they’re trying to cover up the truth about what’s really going on, and the way I react to this situation defines the character of Donna Thompson. Instead of complying with the authorities for the sake of being obedient, I bravely continue to scour the town with my cameraman in search of any information to inform the public with. And 3 years later, I’m still committed to exposing the truth, so I gather all the footage that was shot that day and make a documentary film about it, knowing very well this could get me arrested or in severe trouble with the
authorities.

What was so riveting about playing this character is that there are 2 drastically different versions of Donna Thompson; there’s such a stark contrast between how I start out in the beginning of the film as a wide-eyed, innocent, bubbly pixie-haircut intern vs. The Donna Thompson 3 years later, who has Post Traumatic Stress Disorder from the tragedy she’s witnessed and has in many ways lost her innocence. My appearance is very disheveled, and my demeanor is no longer the bubbly girl I once was, but rather someone who almost looks like they’ve had the life sucked out of them. Many people with PTSD experience dissociation, a state in which someone detaches from his/her feelings because the stimulation he/she experiences is too much to handle. Because of the pain and trauma Donna has experienced, and being that she’s been watching hours and hours of horrific footage to make her documentary, I made a choice that she would be in this state, incredibly saddened, but trying to be removed emotionally when reporting. 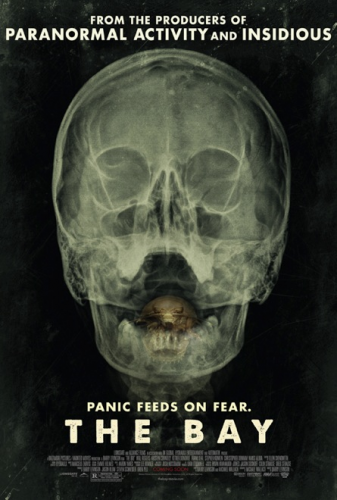 How was it working with the legendary Barry Levinson?

It was incredible! Barry has such a humble, collaborative, and open-minded approach to the creative process. He loves spontaneity and was committed to bringing each actor’s unique ideas and improvisation to the table. Before shooting, he called me to share some ideas he had for my character as a jumping off point, and then really allowed me to spread my wings and fly with my own ideas that I could add to it. Donna was originally written as a more seasoned reporter in her 30’s, but after seeing my audition tape, he thought it would be more interesting to make Donna a college student at American University interning at a news station trying to mimic what she thought a professional reporter would act like. This opened up so many opportunities for comedic moments in which Donna is “out of her element” and trying to fit in. It also allowed for some sweet dramatic moments in which Donna feels that she must separate her human emotions from her duties as a professional reporter and it raises some fascinating questions as to whether or not real-life reporters should perhaps have more permission to convey their emotional attachment to stories they cover.

Did Barry Levinson share any words of wisdom during the filming?

Absolutely! I’ll never forget when we were shooting the narration, I did the first take narrating the film from beginning, middle, to end straight through, totally uncensored, improvising and adding in tidbits whenever I felt inspired. After that take, Barry first told me all the parts of the narration he loved and wanted to keep in the second take, and then gave me some notes and adjustments to make, but followed it by saying, “But I’m glad you tried all that stuff out, that’s what happens when we play.” Hearing a critically acclaimed Oscar-winning director refer to what we just as “playing” was one of the most refreshing, wisest things I’ve ever heard anyone say for a number of reasons. I think it’s sometimes easy for artists to fall into the trap of “overthinking” and “overworking” their craft out of fear that they’re not going to be good and as a result, we lose our sense of fun and playfulness, which is really the only way we’re going to create anything fresh. When we’re in this “overworking” mindset, we don’t make bold choices and take risks, but rather safe, cookie-cutter, predictable choices in an effort to make “the right” choice. When we treat our work as “playing,” we’re not as afraid to make a mistake, or make a bold choice that might not work because we’re free of judgment and just simply “playing.” When he said that, it was also such a great reminder to not take yourself so seriously and have fun, which is what you should be doing even though you’re working hard. You can work hard and play at the same time. And working with a director who understands that and gives you the freedom to “play” is a true gift, and not something to be taken for granted.

How does this compare to other found footage movies?

The Bay is completely different from any found footage movie ever made. I don’t know the exact number, but the movie was shot with over 20 cameras, from iphones, to surveillance cameras, to skype videos, etc…The beauty of this is that each and every camera contributes to a very specific purpose in moving the story forward and it never feels forced or illogical that the story is being told this way. When I watch the film, I forget I’m watching a “found footage” movie, I’m just sucked into the story and characters. The cameras don’t overpower the story being told. It’s also different from other found footage movies because a lot of the film is based on facts about the toxicity levels of our waters and it makes it even scarier to know that what’s happening on screen is not a far stretch from the reality of what could happen if we don’t take better care of our environment.

In your opinion, what was the most difficult aspect of making The  Bay?

I wouldn’t describe anything as difficult, but rather challenging in the very best creative way. When I sign on to play a character, I never want the work to be easy because that’s not going to be exciting, nor make me grow as an artist and as a human being. I found it challenging in the very best way to dig into the psyche of a character who has severe Post Traumatic Stress Disorder from the horrific events that she’s witnessed. I enjoyed the challenge of finding that fine balance between narrating the story in a very matter-of-fact, and “reporter-like,” way but also delicately conveying the essence of a woman who is extremely emotionally attached to the story underneath.

What was our proudest moment during the filming of The Bay?

I’m just so proud of all the little moments in the film that, when combined together, create such a layered, complicated human being. Throughout the filming process, Barry, Michael, and I were in a constant state of exploration and always finding details to add to my character. I’m proud of the discoveries we made about Donna’s internal conflict between being true to her responsibilities as an objective reporter and being true to her humanity as an emotional creature. I’m proud of the stark contrast between the Donna we meet in the beginning, who is a wholesome, innocent, bubbly pixie haired girl excited to report July 4th festivities and the Donna in 2012 who has lost her innocence and experienced true pain and is coping with PTSD while still committed to tell the story.

Any cool or “scary” behind the scenes moments?
Actually, there was a cool, scary scene that didn’t end up making it into the final cut, but I really hope it comes out on the DVD extras. In one version of the script, Donna gets the disease ALL OVER HER FACE! They hired this really talented special effects artist to fly in from Canad to do the makeup and it was a very intense process. A few weeks prior to shooting, he came to New York to make a mask of my face shape so he can work on creating the boils to fit my face between then and shooting. That took about 2 hours. Then, on set in Georgetown, South Carolina, it took about 2 hours to paint the mask on and about an hour to take it off after shooting. I looked SOOO SCARY, you couldn’t even recognize me. I could barely move my mouth. And there was even this veiny looking tube under the mask in the throat area so that blood could pour out of my mouth.

What are some of your favorite horror movies?
I love the Paranormal Activity and Scream series.

What next up for Kether Donohue?
I am very grateful to have another film called Pitch Perfect out in theatres right now! I play Alice, a completely different character than Donna. Alice is a snobby, bitchy, superficial, aggressive leader of the Barden Bellas in the beginning of the film, and when she graduates, she passes her throne onto Anna Camp and Brittany Snow’s characters. I also produced and star in a psychological thriller called Altered States of Plaine that is currently being distributed all throughout Latin America and will soon be coming the United States. 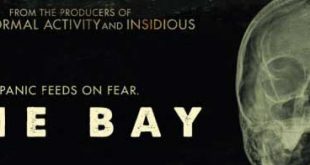 ‘The Bay’ scares it up with parasitic jumping fish from Lionsgate