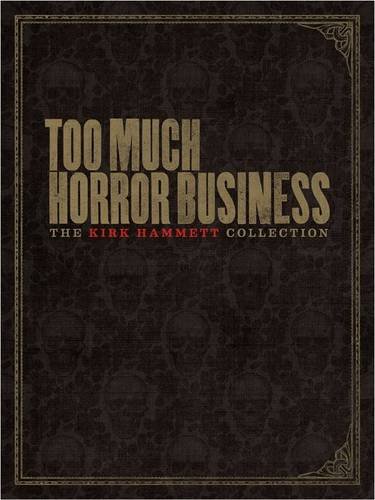 You know man by his mega licks and intense work with the group Metallica. However it’s not everyday that you find a book produced “by” a rock star who shares a passion with his horror community. So much that he has taken the time to compile a very large, hard bound book that displays tons of memorabilia from his “own” personal collection.

Kirk is a consummate horror fan and collector who has spent quite the many years collecting posters, novelties, art and what not as a fan of the genre. Many of these pieces are deemed rare and extremely hard to find. What better way to show his love for the genre than giving us back a fine edition of scanned items from his own collection. This along with one on one interviews makes up the edition of “Too Much Horror Business” authored by Authors Kirk Hammett and Steffan Chirazi

As the book drills forth, we are greeted by a few interviews with Kirk…..not so much on his fancy guitar licks but as his dedication and obsession over horror as a collector. Your are in fact taken into world that is as abstract and convert as “say” an FBI agent (thought maybe not as involved per- se).

The collector world is described in more words or less as being an elite small group of wealthy collectors who purchase rare horror items and collectable, most notably rare poster art. Kirk, one of the top in this field (I believe he cited as being 2nd..) details how rare finds are exchanged, bought, traded, sold and referred within this “circle” of serious appreciators to fine vintage art. It’s quite remarkable and sometimes absurd, though this is the world of the collector which as we know (as in other cases) is taken pretty serious.

Kirk talks about his love for the eras, the imagery, the films, the toys and the odd bit or 2 he’s able to add to his master collective.

Though make no mistake, this book is mostly about the imagery, the pictures and the rare bits that Kirk has been so generous as to re-share with the world. The book comes from his love for the field and from it he is able to recapture these images perfectly brought back to life for fans of the genre who might never get to see these in any way, shape, or form. The book is hardcover with vibrant color pages celebrating a rather impressive diversity in the eras, styles, and types of collectives. We get to see rare suits, worn in the films, some artifacts, and “even” set props. The highlight of course is in the poster art which not only caters to the oldies but includes some more recent era stuff as well. The original Pinhead makeup stands as a good example (and the classic modern horror posters)

My fascination came from some of the toys picture in here that are fully packaged in some cases and set on display for others. I was able to recall a few lost items of my own that I remembered purchasing new at the time only to see now as part of a long lost group of yesterdays memories. The primary focus here is on the famous monster era of movie icons, such as “The Mummy”, “Frankenstein”, “Dracula”, “The Wolfman” and others of this first run. As a book it’s a great table-top addition for sharing with fans to see who can recall such items and when they came out. Others simply exist to reveal those collectibles that we otherwise might never get to see.

I not so sure that we have seen everything in Kirk’s archives, but I’m sure that this is his most valued. It’s hard to believe a Dracula poster or a Mummy 1-sheet being worth 1000’s, but this is the norm for hardcore collectors. We are informed on restorations, scams, authentications and even a bit of Kirk’s admiration for early bands who inspired him to build a life of music and performance.

In short, the good news is, you don’t have to be a millionaire to gaze upon some of horror’s rarest items.”Too Much Horror Business” is a book that shows its respect by returning the favor, enuff said.