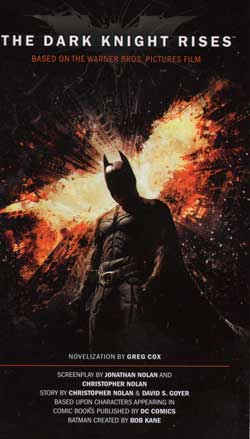 In addition to struggling with his own personal issues that are plaguing him (thanks primarily to the events that took place at the end of the last film) Batman must contend with the threat of the dangerous and deadly Bane as well as Catwoman. Will Batman be able to overcome his demons and save Gotham from total annihilation or is the city doomed?

I have to be honest, and I apologize because I know I am going to piss a lot of you out there off. I just don’t like Nolan’s Batman series. I thought that Batman Begins was incredibly boring and The Dark Knight was totally overrated (and way too long). I haven’t seen The Dark Knight Rises and probably won’t, but I have read the novelization. In my modest opinion there hasn’t been a good Batman film since Tim Burton jumped ship on the franchise, but I will admit that Nolan’s attempts are a billion times better than the two beyond terrible movies that Joel Schumacher did. I think that my biggest problem with Nolan’s movies is that I just can’t see Christian Bale in the role of Batman. I think that he was awesome in American Psycho but he was just the wrong choice as Batman (plus I am pretty sure that he does that irritating shit with his voice just out of spite now because he knows people don’t like it and are going to bitch about it). When I first heard that Bane (who is one of my favorite Batman villains of all time) was going to be in The Dark Knight Rises I was excited…then I saw the pictures of Tom Hardy in costume and lost all hope in it (A Bane without Venom-the thing that pretty much makes the character and makes him cool? Count me out) and I thought Catwoman looked ridiculous. I decided to skip the movie and check out the novelization just because I was curious as to how Nolan was going to end the series. I wasn’t impressed.

I am a comic book geek and except for Spider-Man, Batman is my favorite. I’m sorry, but the Batman that appears in this novel (and movie) isn’t Batman. No matter what, he wouldn’t just sit on his ass for eight years doing nothing to help stem the flow of crime in Gotham. That isn’t Bruce Wayne, and it sure as hell ain’t Batman. It would take a lot more than the events that took place at the end of the last film to make Bruce give up being Batman as he would basically have to die before he gave up the cape and cowl. This is one of the many, many mistakes that the novelization (and movie) makes. I mean honestly folks, could you see Batman being like “F*ck it, I’m out!” just because of what happened with Two Face at the end of The Dark Knight and standing by while crime runs rampant and countless innocent people are killed? I don’t think so.

While we are on the topic of characters I also have to say that the Bane and Catwoman that appear in the novelization (and movie) are all wrong. Like I said earlier, where the Hell is Bane’s Venom? Instead of being some intimidating character like he is in the comics he is some silly guy with a stupid looking mask on his face that looks nothing like the one that the character actually wears. It’s cool that they threw the comic geeks like me a bone and had him break Bruce’s back (as he did during the Knightfall storyline back in the 90’s) but it doesn’t really make up for the fact that they got pretty much everything else about the character wrong. The same goes for Catwoman , and don’t even get me started on the silly shit with John Blake (whose first name happens to be-groan-Robin-which is idiotic in its own way since Batman’s sidekick’s real name isn’t actually Robin).

I have nothing against Greg Cox (who wrote the novelization as he is a great writer and he did a fine job with what he had to work with), but I think that the overall plot of The Dark Knight Rises (what an awful title, by the way) is terrible. I know that there are a lot of people out there who love the movie and I truly do apologize if I offend you with this review, but as I said earlier I have to be honest. Grab a copy of the novelization only if you are a huge fan of the movie, otherwise you can skip it completely and buy a few of the Batman comic books with the money you saved instead so you can see how the character should really be portrayed.