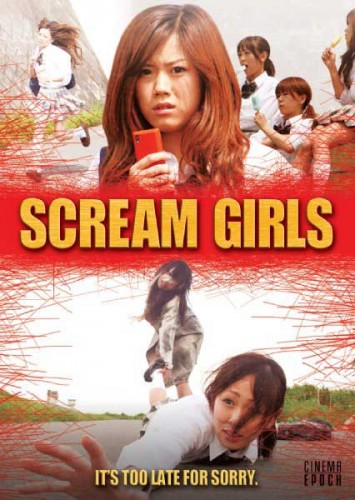 Sticks and stones my break your bones… An urban legend tells of a young schoolgirl who was constantly teased and bullied by the other students. She had no friends- a lost and tortured soul. One day a harmless prank turned tragic- and the poor child died. Now it is believed her spirit haunts the hallways and dreams of the students. A rumor begins to spread that the day is coming where she will reach fill strength and exact revenge on the kids responsible for her death. A group of girls then forms a pact to combat the avenging ghost. But their efforts may be too little… too late.

Based on the urban legend of a entity called Hikiko Mori we are told of an old phantom who had to undergo constant bullying from her classmates. The entity was killed in an accidental death and remains to haunt cruel and vindictive school bullies to their ultimate demise. Well as with legends comes a certain interest that seems to be fueled by young school girls who indulge into the myths of these things. One such girl in particular runs an online web site that is focused on horror content and local crime incidents. In this story her interest seems to mirror reality for her as she becomes bullied when a local girl gets killed and is blamed on this fictitious legend.

Her classmates who show no mercy, begin to bully her claiming that she killed the young girl as the entity Hikiko. The web site is in question as it seemed to have predicted this event before it happened. Her days are spent dealing with friends and classmates turning against her during the day while her cruel abusive father seems to get pleasure out of beating and kicking her on a nightly basis. As the events continue, she begins to dream about Hikiko and slowly find herself becoming what she most feared. This “Hikiko” appears as a bruised and scarred entity wrapped in scraps and soiled clothing with one good arm and a nasty revenge streak.

The school board is concerned and visits her parents at their home to reveal the web site which has been in question. As punishment the father locks her in her room complete with board and nails for several days. During that time she becomes more depressed and consumed as her life has become that which she had shown interest in. In an act of defiance, she proceeds to dig into her own face and body mimicking this Hikiko legend. Well we can guess how this plays out with her tormentors being targets and her persona being almost possessively taken over. The film explores a urban legend that is brought forward in  a clever way by mimicking the circumstances instead of simply reporting the legend itself. Vengeful spirits are big in Asian cinema, though this time the spirit is keep more personal so that the influence can play out within the film.

Scares are kept minimal here as the director focuses more on a girl in trouble and her troubled life. Her character which runs a horror web site was a nice touch that as a reviewer I can relate to. Though I’m begining to feel that all Asian school girls are inheritably cruel as they seem to indulge in torment in several of these films on a pretty constant basis. Also I have to comment of the fact that “school girls” is a big topic in these films with the uniforms almost symbolizing a erotically constant factor to align with violence and torment.

Prolific Director Hisaaki Nagaoka has been busy with a bunch of new releases coming out the same time also under the Cinema Epoch brand. As of this review I couldn’t find a IMDB profile, so my actor credits are absent for the moment. The movie is a great example of intriguing Asian cinema that aligns itself with urban myths. Hikiko might be Asian’s version of “Bloody Mary” but she serves a purpose that has lasted within the culture.

The story is kept light in terms of showing any real violence or gore of any kind. This film works for horror viewers who want to focus on a story rather than the extremes that other films take things too. The film clock in at 62 minutes making it overextended kind of movie that you’d expect to see in an anthology on a shorter scale. Just on a side note, several of Cinema Epochs’s horror films run this format and style of movie making. So if your a horror fan that wants to enjoy without disgust then “Scream Girls” is your kind of film!