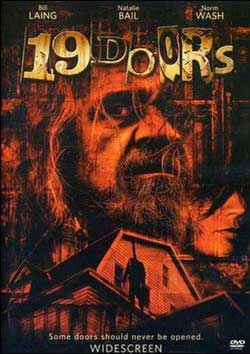 While working on a new horror script a screenwriter named Grace makes the stupid decision to stay at a supposedly haunted hotel while she is working on it for inspiration. The hotel was the site of several horrible murders several decades ago and soon Grace starts to see and hear some strange and unnerving things that suggest that the hotel is inhabited by the spirits of the dead. Is the hotel really haunted or is Grace just losing her grip on reality?

It seems that the direct-to-video market these days is drowning in a sea of movies that either feature zombies or ghosts. When handled correctly the films that feature either one can be quite good, but when they are sloppily executed they can be pretty damn bad. 19 Doors falls under the latter category as it is just another movie about some place that is supposed to be haunted that I have already seen over and over and over again in the last couple of years. It isn’t scary, original, or even all that interesting, and it was quite a struggle for me to actually finish it to be brutally honest. I really wanted to like it because I thought that the premise sounded promising (even if it was painfully unoriginal), but just a few minutes into it I knew that I was in for a long hour and a half and I was right. While I was watching it I was just eager for it to end (which is never a good sign) and it took all of my self control not to skip ahead to the next scene several times.

I think that one of the biggest problems that the movie has is that it is just so damn cookie-cutter and there is nothing that sets it apart from literally hundreds (if not thousands) of other similar films. Off the top of my head I can name at least ten other movies that have basically the same plot and most of them were a lot more enjoyable than this film, which takes me to the other major problem that plagues 19 Doors which is the fact that it is just plain boring. Nothing really happens throughout most of the movie other than Grace hearing strange noises and seeing odd things, and none of them are particularly impressive or creepy.

If you are going to make a horror film that is centered around some place that is haunted then I think that your main priority should be to try as hard as possible to make the movie scary instead of mind-numbingly boring. Not once does anything even slightly scary take place for the entire duration of the film (there aren’t even any jump scares, for Pete’s sake!) and there are even a time or two where Grace just appears to be indifferent or just bored as Hell when something “scary” takes place. You know that you are in trouble when you are watching a horror film and even the film’s characters aren’t afraid of what is going on around them. If they aren’t terrified then why should I as a viewer be?

Unless you have never seen a horror film in your life you will see the ending coming several miles away. I think that it is supposed to be some sort of twist that shocks the viewer, but to be honest with you I pretty much knew that that was the way it was going to end and I would have actually been surprised if the filmmakers had done something differently at the end. Any horror fan worth his or her salt will pretty much be able to predict what is going to happen at the film’s conclusion at least halfway (if not earlier) into things.

Watching 19 Doors wasn’t exactly what I would call a pleasant experience. It was boring, predictable, and not even the tiniest bit unnerving or scary (I was more frightened and shocked when I watched Watership Down if you want to know the truth). I admire the fact that the guys responsible actually made the effort to get together to make this film even though they obviously had a very low budget but I have a great deal of trouble recommending it to anyone. I have seen many, many other films that were just as low budget and I enjoyed the hell out of them due to the effort and passion put into them by the filmmakers behind them, and I can say that that effort and passion were sorely lacking when it came to this movie. Skip it unless you are just really curious about it, and even then I would prepare yourself to be very disappointed before you watched it. 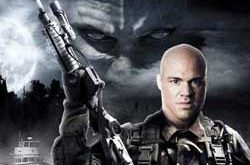