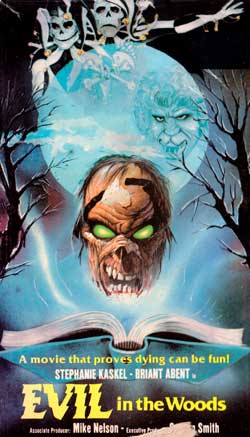 A young boy checks out a book titled Evil in the Woods from his local library.  He immediately takes the book home and begins to read it and is soon sucked into a strange world set in Mildew Georgia.  The book describes the plight of a group of low budget film makers who start to make their newest schlock piece in a woods that is occupied by not only an evil witch but also her cannibalistic and mentally disabled family.  As the boy reads the book he starts to get sucked into the story just a little too much, the plot draws him in but will his will be enough to finish the fractured fable or will he forever get sucked into its pages.

“I think this place is lovely and we should build a house up here someday.”

Ah the cheap 1980’s shot on video market.  Mom and pop video stores were on every corner and as long as you had a “decent” camera and some editing software and an eye catching cover you were destined to be a success.  I believe that is what the Fantasy Factory believed when they released Evil in the Woods…a great example of the cheesy shot on video classicks from the 1980’s. 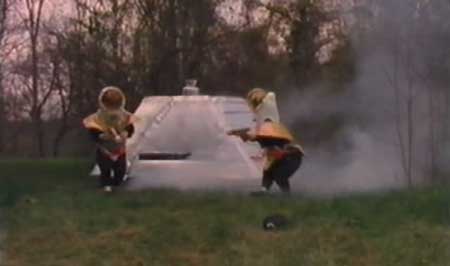 Evil in the Woods plays off like a twisted Never Ending Story with some Hills Have Eyes and a little bit of ol’ Ed Wood himself thrown in for good measure.  A young boy checks out a book titled Evil in the Woods from his local library (eerily it is due back on Friday the 13th).  The book describes itself as a “fractured fable from the Fantasy Factory”…..this is the same company that made the film…and no this isn’t the show that is on MTV.

As the boy reads the book the viewer is introduced to one of the many title screens that pop up on the screen and are read by a narrator with a hunky dory southern accent, it makes sense since the story is supposed to take place in Mildew Georgia.  These title cards at least attempt to make sense out of a plot that had to have been written by someone with an extreme case of ADD. 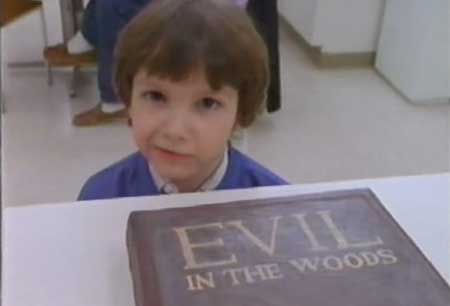 The plot mainly focuses on the town of Mildew which has suffered 3,030 days of evil.  This evil comes from a witch and her cannibalistic and mentally challenged family.  First a family is camping and their son goes missing (and is eaten by the witch and her family….it isn’t really shown so you can calm down now gore hounds), then a film crew comes into the woods to film their newest film…something about a bigfoot fighting aliens and runs into the evil family.  The whole time the young boy gets consumed by the story and soon enough his parents find him and learn that sometimes it IS the things that you read that influence your life.

Evil in the Woods can be confusing at times but luckily that narrator keeps popping up to fill you in on what is happening.  I mean it can get confusing when in the span of 90 minutes you see scenes of gut munching, a kid Indian burning a persons arm off, Corman style monsters, a bigfoot attack, a mutant family, little people, a witch, a rotting corpse in the closet, some really crazy hair and some little aliens.  This is definitely one you would want to watch with a group of friends and some liquid encouragement….I believe only then would you find the film at least tolerable.

Evil in the Woods can be an experience to watch since the audio levels and picture quality are really sub par….even for a shot on video film from the 80’s.  Whoever edited this film should also be drug out into the street and kicked quite a few times…the quick cuts and often delayed cuts although humorous the first few times do eventually start to take a toll on the viewer.  The cast over acts their way through the various situations I mentioned above and although it can be mildly entertaining it does start to drain on its viewer.  And just who thought it was a good idea to let that narrator talk with that annoying accent? 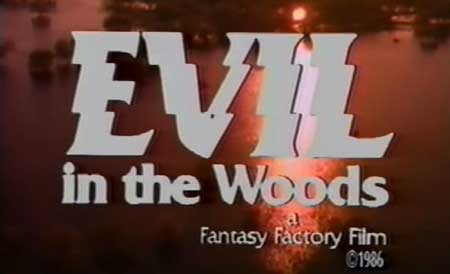 As with most of the films from this wonderful era Evil in the Woods is definitely an acquired taste.  Those of us who enjoy these films know that one of the main reasons to watch them is the gore.  Evil in the Woods does not let up on the gore department and as I said above the film would be great viewing with a group of people who could MST3000 the hell out of it. 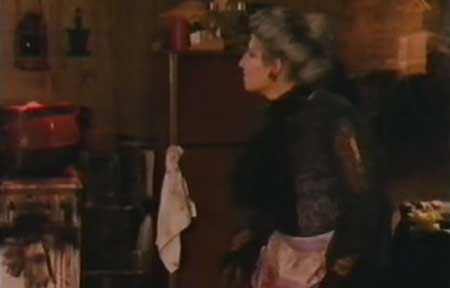 If you are a fan of these cheapies from the 80’s as I am then Evil in the Woods is right up your alley.  However if you are a fan of more processed and clean horror fare it is probably best to leave this one on the shelf.  I still find it amusing though that the film managed to use that green slime (you know the one that used to kill He-Man when you were a kid) as a gore gimmick in the film, a ten year old Killion would have been tickled with glee seeing that scene!