Somewhere prowling in the darkest corner of a desolate, abandoned building on the edge of a wilderness is a dangerous animal. It’s a human animal that lives by the rules of the wild, where survival is the only concern.

This creature of the night uses cunning and instinct to hunt and kill for pleasure. He has no qualms about his actions; he lives by his desires and he’ll take what he wants.

Let’s talk about originality. Original ideas, stories, scripts; it has been argued before that there no original ideas. Some go so far as to say there aren’t any more while others leave it at all good stories will and should share common elements. It can’t hurt to hedge your bets. The point being that what’s important isn’t originality but rather a particular voice or style. Both Steven Spielberg and Martin Scorsese are great directors but it’s their style that brings them so much success. While “Splintered” tries a fresh take on some old themes to varied success there’s more here in the pure execution of a film.

Sophie is a curious girl who, with some friends, decides to search out a legendary beast that kills livestock and people, allegedly. Sophie is driven by childhood nightmares that may turn out to be all too real. While camping in the woods near where the beast has been rumored she stumbles upon an abandoned building where one of her friends is attacked and she is kidnapped. She awakes to find herself locked in a room and meets Gavin, her jailer, who’s scary and not a little twitchy. As she tries to escape she discovers that Gavin may not be all he first appears to be and that escaping her room doesn’t mean she’s safe.

Saying that film is a visual medium seems so obvious that it wouldn’t be terribly surprising if it wasn’t included in the syllabus at film school and yet it’s often forgotten as a foundation of style. “Splintered” has a dark and gritty style that’s awash in muted browns and greens and transitions well between the woods and dilapidated buildings. Many scenes are sparsely lit and filmed in close quarters, which creates an unnerving tension, showing just enough action to maintain the mood. Simeon Halligan, directing his first feature length, shows great attention to the continuity of his own voice which carries through from the beginning to the final frame. The script takes on too many ideas and attempts to present them in a new way that it verges on being excessively complex. It addresses werewolves, abuses of the church, Sophie’s nightmares and how she deals with trauma from her youth and familial obligation as characters try to protect their loved ones. Not to mention the relationship between all of the friends who arrive in the woods there’s plenty here to easily over reach but Halligan corrals this story into a fast paced event that has more to offer around each corner. 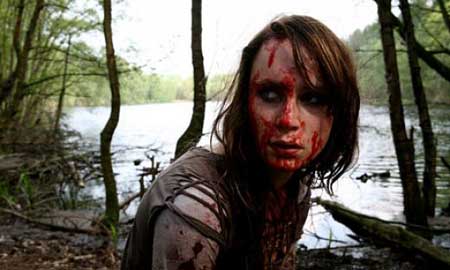 Gavin, played by Stephen Walters (‘Powder’ and ‘Hannibal Rising’) gives such a rich performance that has fierce intensity yet still maintains a vulnerability. Walters deftly handles Gavin as a person who’s torn in an impossible situation where something or someone will inexorably fall. The rest of the cast gives decent performances, aside from a poor line delivery here and there, and make the best of their parts. Holly Weston (Sophie) consistently plays her intentions well and maintains a strong lead character without succumbing to the weaknesses of a “troubled childhood.”

The story moves well enough to not bog down in exaggerated tension or over-long exposition and successfully places the exposition in small snippets interspersed with the action. The downside is that much of the back story remains disconnected from the action at hand and serves more as a tacked on explanation rather than to further drive the story along. This becomes surprisingly easy to forgive as “Splintered” doesn’t linger here and moves along its stylistic journey and handles the old horror movie tropes with aplomb; the-killer-isn’t-dead-yet end piece is here and handled fairly well despite having “seen it all before.” 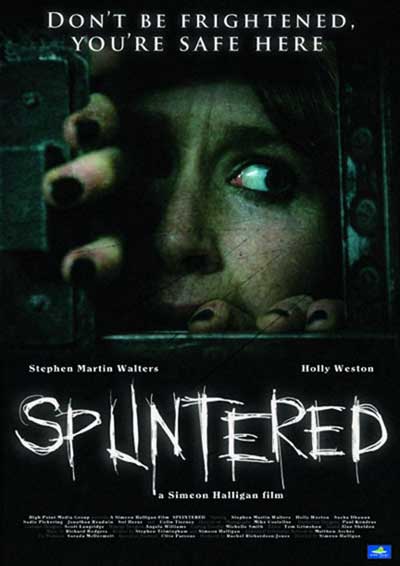 Many themes and script elements appear cobbled together or added as an afterthought; particularly a reveal near the end with heavy social implications but retains little impact on the bulk of the film. However, while the plot might be a little disjointed, the movie barrels forward adroitly with refreshing panache. Images can’t help but tell a story, the power of film making is when those images are compelling enough to illicit emotions that bring you closer to the experience. This is something that “Splintered” is keenly capable of and delivers on. 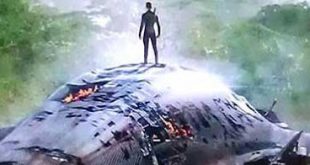