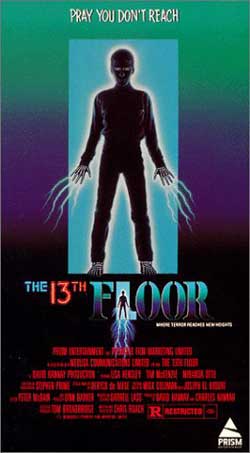 As a young child Heather saw her own father kill a boy that was her age, the image of his death has haunted her for life. Now as a young adult Heather still runs from that image in her mind as well as her father who is searching for her, well he isn’t really searching for her…he hired a hit man to do that. Heather finds refuge in an office building hiding out with her friend on…you guessed it the 13th floor. Lucky for Heather the maintnance man she befriends who brings her a television and food isn’t the only thing that is protecting her…it seems the ghost of the young boy she saw murdered also has her back.

“The whole thing got out of hand for a while.”

The 13th Floor is another one of those exploitation imports from the great down under…that’s right this one is from Australia. It is considered Aussie exploitation but really there isn’t much exploitation going on here it’s just a low budget film about a young adult who is trying to run and hide from her past aka her father who works for the mafia.

The film starts by showing Heather as a child witnessing her father electrocuting a boy that is her age. To be honest this is the closest to our beloved horror genre that The 13th Floor gets for a while. Most of the film the viewer is shown how Heather and her friend slum it in an office building. They quickly make friends with a maintnance man and a man who works at the office. The girls are given food and a television and are taking care of. Heather is so taken care of that she eventually goes on a date with the office worker. The film was made in 1988 and hasn’t held up as far as styles go so be prepared to have several chuckles let loose as you see some of the fashion choices and hair styles. Heather spends most of the film looking like the material girl Madonna. 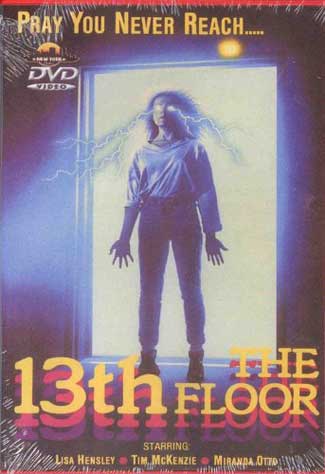 It takes a while but soon there are some hints of the supernatural but the film never really does take off and become a “horror” film in most conventions of the word. There are some good “jump scenes” and a few gore gags near the end…but hardly anything to get too worked up about. The ghost of the young boy actually doesn’t even make an appearance until half way through the movie…most of the time the ghost just causes electrical disturbances throughout the office building…he was electrocuted remember.

Largely forgettable The 13th Floor almost plays out like a “mob” film of sorts. Heather’s dad and his goons spend most of the film trying to find and kill the young lady who only wants to live a normal life. There are quite a few scenes which try to build up some character development but as a horror fan I found myself asking out loud several times during the coarse of the film “where are my scares?”

Chris Roache has done a good job with what he has here and the cast genuinely believes they are making a good product. One of the goons Heather’s dad hires however steals almost every scene he is in and if anything at least gives the viewer something to look forward too. This is a good one to get if you have a large group of friends and some liquid encouragement…the clothing and hairstyles alone will leave the group in stitches between your wonderings of “where is the ghost?”

Not really my cup of tea and not really a horror film…I mean it does contain some elements but fifteen minutes of paranormal activity does not make a genre film, I really do wonder if the ghost element was added much later in the planning of the film in an effort to get it distributed easier.

Only those interested in 1980’s fashion need apply supernatural fans will find themselves bored and gore hounds will definitely not be patient enough to wait for the few gore gags there are….