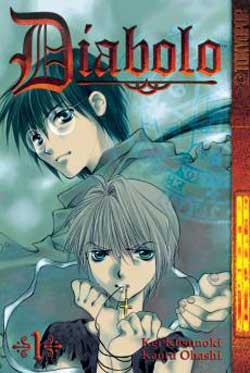 “Something extra-wicked this way comes! Ren and Rai play with fire when they sell their souls to the demon Diabolo to save Ren’s cousin. Diabolo gives Ren the power of ultimate defense and Rai the power of ultimate offense. However, those who fall into the Diabolo’s trap start to go crazy at 17, and at age 18 they reach the point of no return…“

Artwork: 3.5 out of 5.0
This was a nice looking book overall. This is one book though that I think could benefit from the use of color. Of course that wasn’t an option, but I am just saying. Nice creepy imagery was the main focus of the first two chapters, but as the book went on that look seemed to fade away. Some panels were very confusing, again where I think color may have helped. Overall though you get the typical look on top of some good horror scenes so this is a winner.

Story: 2.0 out of 5.0
This is where this book got off track. I loved what the first two chapters were all about, except for the fact that they were so jumpy. I wound up having to reread so many pages and still had no real idea on what they were trying to say. Very disturbing imagery and storytelling started the book, but as I got into the later chapters that went away as a more stable ground was found. While I was disappointed at the turn at least a straight line was being formed with the plot.

Dying Breath: 2.5 out of 5.0
I grabbed this book from the library because it had the nice little horror sticker on the side of it. I liked the concept at the beginning but felt it was lost with bad scripting. When the book started to make sense story wise, the eerie ideas jumped ship and it just became a tale about two boys learning how to fix a mistake. While the later story building is intriguing enough for me to want to read book 2, I wonder how the first section of this book could be fixed. The artwork is the winner here, but there is a possibility that in later volumes this one could gain some more momentum.

If you would like to buy or know more about Diabolo Volume 1 please go to www.tokyopop.com