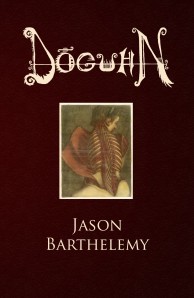 Ever since I was a kid, I’ve loved fantasy and stories about other worlds and beings/creatures that were not of our realm. So when the first book I was to review was of the fantasy genre, I was more than happy to have the chance to read and review it.

Jason Barthelemy’s “Doguhn” tells the story of a young man by the name of Guy Kruspe who moves to a small town in an attempt to escape the noise of city life. He doesn’t even question the suspiciously low price on the house he purchased (though later evens do explain why). But it is not too soon after Guy is settled in that he begins to notice strange events occurring in the town and each event seems to be directly linked to the town’s only church, The Church of Holy Disciples.

The more Guy looks into the town and church history, the more it appears that the church is not merely an independent structure in town, but an entity that runs the entire town from it’s police force down to many of the markets and businesses of the town. With the exception of a small handful of people, the citizens of the town generally seem to be entranced under the spell of the church and austrocize the small handful who aren’t, including Guy. While this alone may seem offsetting, Guy and his friends begin to uncover unearthly things of the town and church that present a more sinister agenda. In a fight for his life, Guy is thrust into an alternative world of fantastic landscapes and beings. Guy is led to discover his entanglement in this alternative universe and how crucial a role he plays as the fate of both the “Earthly” world and this new world hang in the balance.

I will say flat out that from the minute I picked this book up, I was hardly able to put it down. While not every chapter had a “cliffhanger” ending, it still had me wondering what was to happen next and wanting to immediately delve into the next chapter. I believe this has to do with Barthelemy’s ability to convey a gripping storyline and believable characters that the reader can actually care about.

When an author can somehow manage to create a connection between reader and characters, you know he or she is doing something right. In this book, the author creates a world that is in the tradition of Lovecraft, Tolkein, Carroll, and CS Lewis. There were even times when the fantastical and dark, mental adventure that this book can take the reader on can even be compared with Stephen King’s “The Dark Tower” series. An author can never go wrong presenting a gripping battle between good and evil. I would highly recommend this book to sci-fi, horror, and fantasy fans.

Find out more about the author and “Doguhn” at www.thelivingdread.com