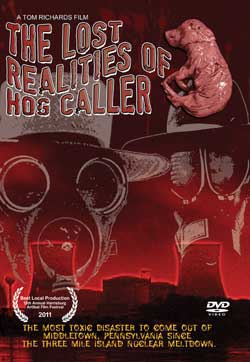 For some reason or another a local news station has decided to search out and find the grind core band Hog Caller. There are many witness’s who have quite a few things to say about the duo of musicians, and most of it is hardly nice at all. It seems the two members of the band have a great appreciation for drugs, devil worship and dead pigs. In what could only be described as one long music video done while on the influence of a whole lot of drugs the viewer is given a glimpse into the “lives” of these musicians.

“Those guys are kind of d*cks!”

Over the last few years I have seen quite a few films that seriously make me question just what exactly I was watching. There were the pseudo snuff films and of course a whole slew of POV films well now it seems I can add a music video to the list of strange and unusual films. Tom Richards’s The Lost Realities of Hog Caller presents itself as a POV style of film about a news channel reporter named Skip Jenkins who is searching high and low for the band Hog Caller. When the film ends however the casual viewer might do some research and learn that yes Hog Caller is a real band and that they have just been tricked into watching one long music video.

Skip starts his research of the band by tracking down those who claim to be friends or at least close with the band. Among the people that are interviewed are ex girlfriends, a priest and a friend who seems to be smoking dope the entire time he is being interviewed. Through these interviews the viewer is informed that the band Hog Caller is a grind core band, I’m not going to describe this musical movement I will just state however you either like it or you don’t and it can at times be quite abrasive. Hog Caller has been around since the early 2000’s and was formed by two members. The two men are known as The Dirt Farmer and Vomitorius. There are various rumors as to what has happened to the band and it is only through these interviews we are given a glimpse into who exactly these two men are. Both of the young men were altar boys when they were younger, both men are heavy into drugs (each one having their own drug of choice); both men also have been prone to forms of devil worship. The Dirt Farmer’s ex girlfriend also enlightens the viewer that it wasn’t just these things alone however that drove her ex boyfriend, he also it seems had a thing for anal sex.

The interviews go on for a little while and during them we are treated to our first music video by the band which basically shows a dead pig’s severed head being stabbed by the two members. That is one thing that comes up a lot in this film is the dead pig head, almost every scene with the band incorporates one in some way….after all the bands name is Hog Caller. 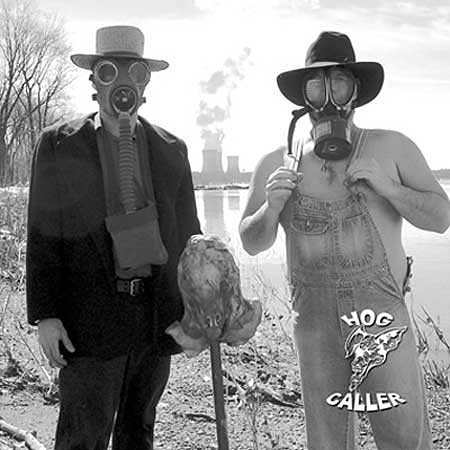 News caster Skip Jenkins soon gets somewhere when he visits a rather large flea market and is sold a bunch of VHS tapes that once belonged to the band. It is then that the viewer is given an even more twisted glimpse into Hog Caller. A twisted glimpse indeed that involves George W. Bush, Elvis, Bin Laden, a dead pig being played with on a play ground and a topless woman wearing a pig “mascot” head and a skirt made out of bacon and sausage. By the time the film ends the viewer might be hard pressed to ask just what in the heck they just witnessed, but I still believe we have quite a well packaged music video here. 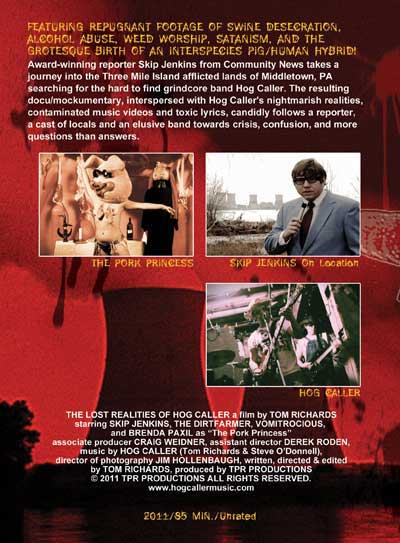 The Lost Realities of Hog Caller likes to play with its audience a lot from its soundtrack, which is mostly composed of the bands music and a lot of strange noises (think original Texas Chainsaw Massacre). This soundtrack just adds to the surrealism that is put in front of the viewer. The imagery also is very twisted from a scene where Vomitorius takes his baby (a dead pig in a stroller) out for some ice cream and then to play at a play ground, to strange attempts at humor which is displayed in a scene where The Dirt Farmer is hunting for Bin Laden. Visual FX highlight these scenes though complete with tracking marks as if the viewer is watching an old VHS tape. The dead pig heads pop up all over the film as well which make up for the obvious George W. Bush and Bin Laden costumes and overdubbing. 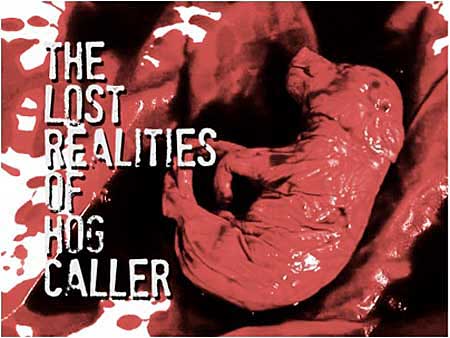 Again I cannot be certain with 100% but I still believe that I just viewed a cleverly packaged music video, but it is definitely quite strange and unusual and should be checked out by those who want to watch something that makes them scratch their heads when its all said and done.