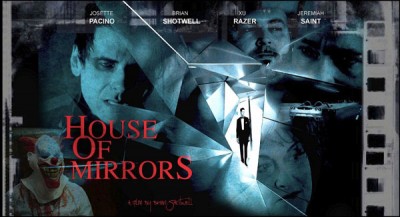 Max Emerson, played by Brian Shotwell, is a successful music executive whose seemingly perfect life is turned upside down after waking up in his mansion. Amnesiac and unable to remember how he got there, he receives a phone call from a stranger claiming to have evidence that he committed a murder the night before.

With just 48 hours to solve the crime, the sadistic madman strings him along, taunting him with clues as his therapist, Ramona (played by Josette Pacino), helps him remember the events leading up to that fateful night. Lies and deception run deep within his circle of friends, including his bodyguard Vince (played by Xu Razer), who tries to help him unravel the event that put him in this dilemma but instead leads him into further confusion. Music by Gothic industrial artist Jeremiah Saint.

Today let’s talk about standardized measurements. Don’t worry, I’m going somewhere with this. Have you ever sat in a chair and just knew that it was a little short? Have you ever been at a counter that was too tall, or walked a set of stairs that felt a little too steep? That’s because you’re used to standardized measurements and when something doesn’t measure up to those standards then you just know it. You can feel it, as if an old friend isn’t feeling well. Alright, maybe not like that, but these are conventions that we usually never actually notice until something doesn’t conform to them. In movies there’s a long history of conventions used, they may not be as specific as a seven and three quarters riser height but they’re just as important.

Next time you’re watching a night scene in a movie check to see if everything is bathed in a cool blue light. It’s not used every time but as an audience we accept blue light as night. Night isn’t blue. Check for yourself tonight, it’s dark but isn’t blue by itself. Even moonlight is usually white or maybe a little yellow. There are other conventions or rules and they all serve to help the audience understand what’s going on, where it’s happening and who’s involved and if they’re used right then the audience will never notice. If they’re not used at all then we just end up with a car wreck of a movie.

Max has found success in signing numerous dark metal and gothic industrial musicians and bands to lucrative contracts but when he wakes with no memory to a phone call from a disgruntled artist he has to piece together his shattered recollection. Aside from one murder which isn’t actually shown on camera be prepared for little else to happen. “House of Mirrors” breaks one of the cardinal movie rules of show-don’t-tell with wanton abandon. The dialogue will spoon feed you plot (which has more holes than Albert Hall) and exposition (that gets saved until the end) like mashed up peas and carrots until it dribbles down your chin and makes a mess of your cartoon bib. This story could have been told better through a series of polaroids.

Shooting a scene out of focus or coming into focus is a common convention that’s often used to signify confusion, chaos or coming into understanding and can be quiet effective when used judiciously. “House of Mirrors” abuses the focus ring on its camera to such an extent that it becomes obvious when it’s intentionally overused and then unintentionally allowed to be used. So much of the film is poorly focused that I had to check that I wasn’t drunk while watching it (I wasn’t this time.) The sound levels were often disturbingly off. The same scene would switch between sounding decent to being recorded in a parking garage.

It’s common for two actors in a scene to be shot together where you can see one person’s face and the other is just in the side of screen. This tells you that they’re together in the same room and helps to indicate where in the room they are. This convention was nearly ignored completely as no two actors shared the screen together. The framing was so tight that it quickly became difficult to tell who was in a scene together, where they were and if they were actually talking to each other as if they shot each person in different cities and tried to edit them into the scene together.

There’s no need to get into all the details of how bad the acting was or how hackneyed the script since “House of Mirrors” ignored all conventions it broke any possibility of retaining a suspension of disbelief to actually be concerned with them. You know you’re in serious trouble when the best part of the movie is the opening credits and the criminally insane goth rocker antagonist is about as threatening as a warm breeze.